This spring and summer, Paris offers an exhibition that shows Pharaoh’s last years. At the same time, IMA’s (Institut du Monde Arabe) museum reopened after a period of restauration.

exhibits this impressive late-pharaoh’s exhibition. The museum is situated in a large avenue in one of Paris’ elegant business centers. There was no queueing this sunny and warm spring day when I entered the museum’s inner yard. The lunch restaurant showed an impressive table set up with a large variety of delicacies. Knowing that the best cookies disappear quickly, I reserved a pistachio cake before entering the air-conditioned rooms.

Pharaoh’s last thousand years? I thought. I had always heard how uninteresting and decandent, politically as well as artistically, this time period had been. But could seven hundred years and ten dynasties: from the New Empire to the arrival of Alexander the Great, only have been a pathetic decadence?

These 120 objects collected from the world’s most famous museums showed how old-fashioned this idea was. This thematic exhibition (the women, the Kingdom of the Dead, the gods…) is fashioned by objects that rarely leave their respective museums and that might never again be shown under one and the same roof. The exquisite golden statue of Amon is from the Metropolitan in New York, the cat goddess Bastet is from the London museum and the “green head” comes from Berlin, as some examples.

Researchers have proved that the Mediterranean countries were more globalized than previously thought – with a great influnce amongst the countries. The typical Egyptian art-form (shoulders in profile with the torso from the front, the nose in profile but both eyes shown) apparently impressed and marked several countries in the neighborhood. Greeks, Perisans and Assyrians were fascinated by the Egyptian art. Artists tend to influence each other and take what they like, remodel it and present a different artwork. Nothing is really new in our ancient world, is it? Except maybe for this exhibition that shows a different face of a long time ago. Those are only some of my thoughts, as I enjoy my cake at the museum’s restaurant, before heading for the next museum, at the opposite side of the river Seine. 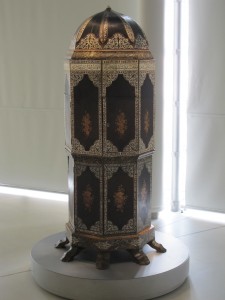 More than a simple renovation the museum has gone through a real restructuring. Contemporary art is mixed with antiquities in these modern rooms where the Arab identity’s different forms of expression has been able to play freely – far away from any religious dogmas. What does it mean to be an Arab? The museum director asked himself that question as he reshaped this space. Instead of a chronologically organized exhibition, it evolved into a successful thematically-inspired one with a mixture of contemporary and ancient objects, with different cultural, religious, social and anthropological dimensions. Even the pre-islamic period is present. “No other museum – even in the Arab world – has made this synthesis between the Arab civilization before and after the conversion to Islam” said Marie Foissy, the chief of project It’s only during the first millenium before Christ that one hears of “Arabs” as a denomination of the nomades that moved between Arabia and the surrounding areas. It’s at that time that the Arab language developed first as a spoken then as a written language. Along with the Muslims’ conquests, the language and the civilisation spread from Mesopotamia to Spain. Islam thus became one of the many religions in this part of the world, as is shown in this museum.

It’s mainly in the city that these develop alongside the commerce, artisans, sciences and education. Finally, the visitor gets an insight into the Arabic traditions and customs. Several Arab countries – as well as the Louvre and other French museums — and private donators, have contributed to this museum. Churches and monastries have loaned precious icones. A beautiful symbol of openess and sharing.

Let’s hope that this symbol will be followed by politicians in our European as well as in the Arab countries, so that we can all enjoy a democratic and expansive summer in freedom and unity amongst our countries and people, independently of beliefs and culture.