A novely in this deaply Catholic country: the President lives “in sin” with  a woman that he is not married to. Hollande has also promised the French women more equality and rights. Will he be a “women’s President”?

From bling-bling to normality

The President has promised his compatriotes that he will not follow in the footsteps of his “bling-bling” predecessor who has irritated and offended the majority in these economically harsh times. The First Lady is a journalist – Valérie Trierweiler (already called by some “Rotweiler” and by others, “Twittweiler”) – comes from a simple background with a handicapped father and a mother that has worked as a cashier. “My life isn’t that of Cinderella” she said. This 47-year old divorced mother of three adolescents does not consider stopping working, despite François Hollande’s new appointment as President of one of Europe’s foremost countries. “To be economically independent is essential for me,” she added. The two have been a couple since several years and this political journalist did not then think that events would turn her life around. However her status as a political journalist will have to be revised. “Maybe I can do journalism outside of France’s sphere instead,” said this elegant brunette with a sparkle in her eyes.

Hollandes promises to the French women:

France is lagging behind in the equality question and that has hardly been a priority so far. It remains to be seen if the new President will keep his promises. But it does sound promising with:

Will the President succeed in one of the areas where the mentalites lag far behind the Scandinavian countries? The French have surpassed us in the rights of the handicapped so why not in the ones about women? Lets remain hopeful at the start of this new 5-year Presidential term with half its Ministers being women. Modern, feminine and active, just like France’s First Lady. 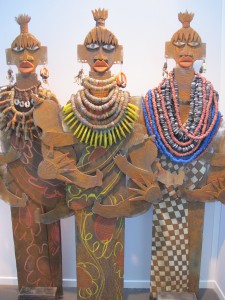