This 18th century old castle, situated at the outskirts of Stockholm, has been recently renovated. The well-kept furnished rooms are in neo-classical style. Tullgarn’s reopening was celebrated with an exhibition of the late Swedish Queen Victoria’s pictures from her stay in Egypt. They are reminiscent of another era before the impact of mass-tourism and fundamentalism. 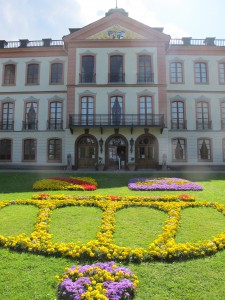 The well-groomed alleys with their aligned trees gave me an incling about the jewel that I was about to discover. I drove up to the parking next to the castle’s English park in the shadows of the tree-crowns. That was actually the backyard, the castle’s frontside used to be on the other side, facing the sea, as the royals arrived by boat then. But King Gustav V liked fast driving. ”When he drove up to the castle, the pebbles flew around and he left deep marks in the gravel,” the guide told us, “he insisted on driving himself”. It once ended with his car in the ditch and that incident later gave the name to that curv in the road – next to IKEA’s big shop south of the capital: “the King’s curv”.  A picture of the accident is set on the mantlepiece in the castle’s “men’s room” – in oriental style with water-pipe and billiard table. Fast driving has been inherited by the actual king and passed on to his son, the prince Carl Philip who has even passed a racing-licence! 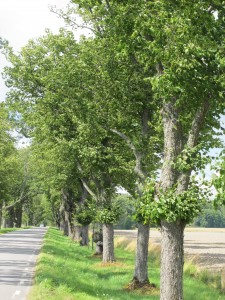 The visitors now have to park by the stables. They have been neatly arranged into a café and with places to sit in what used to be the horses’ boxes. Grilled wild boar is the speciality of the house. The actual king comes to hunt here every year. A large table is then elegantly set and decorated in the dinig-room – or in the kitchen decorated by Victoria in a typical German hunting-style – and the hunters and their guests are all invited to eat game. The guesthouse and restaurant is situated next to the stables in a beautifully pale-yellow painted 1800-century built manorhouse overlooking the sea. But I prefered to walk up to the orangery where they also serve food. Charlotte greeted me with a smile “may I suggest a newly baked waffle?” I opted for the one served with wild-boar cream. Slightly heavy but quite interesting! The adjoining shop tempted me with napkins made of linen, home-made candles, jams and juices. Luckily it was time to head up to the castle and the tour. 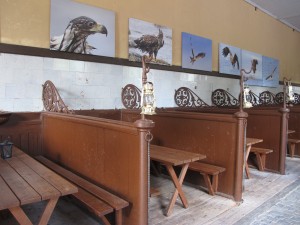 I walked up there through the park and its dams. The 18th century old dams stemming from the Gustavian era, were used as living food-stores for fish. During the end of the 1990-s they were extended and modified to include an ecologically sustainable water-cleaning system. The used water is filtered through dams, water-stairs and gravel to be discharged cleansed in the sea. 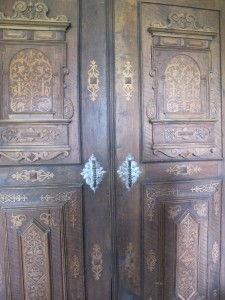 The outer renovations have taken three years to complete. The newly added lime mortar make its façade shine and the inner walls can breath again. The windows have been repainted with natural oil colours. Before entering, I looked up from the beautifully arranged flowers decorated as the royal family’s emblem to view the alliance-emblem – made of cast iron and oak – at the top of the façade. The real gold colour glimmered in the sunshine. In the entrance hall my eyes catched the walls cast with faience. “One of Vicotria’s ideas”, I learned. She had a large collection of faience and stones from Italy. The mosaics she got from Pompeii.

Already during the 1100s a building was situated here. In the 16th century, with Karl Sture, another one was built only to be torn down in the beginning of the 18th century. Tullgarn in its present shape is from the 1720s. The noble family De la Gardie sold the castle to the king who was happy to have a summer palace for his three wild sons (Gustav III, Charles XIII and Fredrik Adolf) to be able to run around outdoors, fish and swim in the sea. The most handsome and sought-after bachelor of the time – Count Fredrik Adolf – then had the castle at his disposal and decorated it elegantly in neo-classical style. But in 1881 – after the royal wedding between Gustav (V) and Victoria – they were given the castle. Victoria – originally from Karlsruhe in Germany – changed the decoration into a mixture of german and oriental style. “Somewhat heavy and dark” admits our guide. 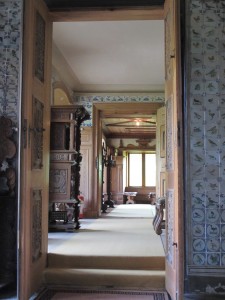 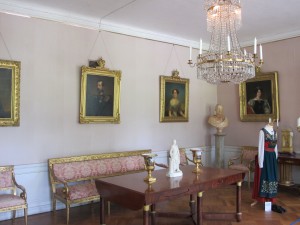 At the death of Gustav V it was restaured into the former neo-classical, light coloured decoration. In one of the rooms I admired the floor painted like a carpet. “It’s the sole existing one left in Europe!” a French art-historian who was in Sweden to study our castle decorations, asserted. Very few complete ones exist in France since the country’s revolutionary destructive forces had plundered and destroyed most of their royals and nobles’ valuables. 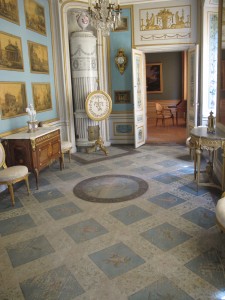 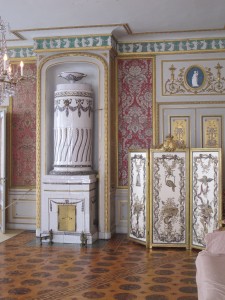 I finally entered the room showing Victoria’s pictures. The royals visited and lived in Egypt between 27th October 1890 and 8th May 1891. Victoria suffered from bronchitis and caughing-attacks (despite that Gustaf continued smoking his cigars…) and often had to move to a warmer climate during the harsh and long Swedish winters. They took in princely at Mena House – one of the Egyptian royal palaces – close to the pyramids. There they enjoyed the climate, the hunting and the exotic excursions. They documented their trip in the prince’s journal and in Victoria’s published book – Vom Nil – including her pictures. Her book along with several of her photographies were displayed at Tullgarn and at some other places around the country.

It was amazing to see the Nile flooded all the way up to the foot of the pyramids without any houses hindering the sight. Victoria developed her pictures herself in a tent raised for the occasion in the desert. It was maybe in one of these dark-rooms that her more and more intimate relationship with the crown-prince’s aide-de-camp, Gustaf von Blixen-Finecke, developed and eventually, upon their return to Sweden, broke out in a real scandal.

Who knows what other secrets might have taken place inside these walls I fantasized about on my way back through the well-kept park, to the parking lot? Beautiful façades may hide many things… 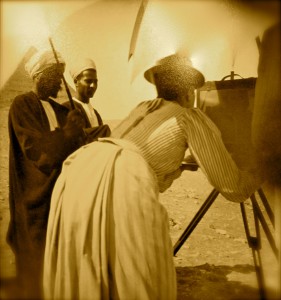