An increase in violence and aggressions against women have these past years led to several new courses in self-defense for women in France. I went to one of those to find out about the safety situation in one of the most beautiful capitals in the world. 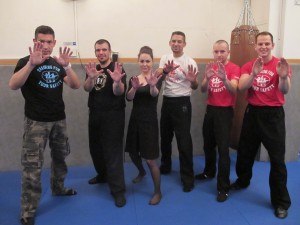 I pulled on a pair of joggers, a t-shirt, gym shoes and put a bottle of water in my rucksack and sat off to the police-station where the course was to take place. During three hours I was – together with some 30 women -going to confront a gang of super-athletes! The five policemen were well-trained, street smart but also knew about law and order (no, pepper spray isn’t allowed! I was told).

Each month they have a theme. This time it was “aggressive words” – i.e. how to react when somebody or a gang of young men call you names in the street? Included in the course were physical activities.

Are these really necessary in Paris though? I wondered being there mostly in view of my more adventurous reoportage trips abroad – like when I passed by the street where girls were being gang raped next to Tahrir, in Cairo, last year… Absolutely! They answered in unison with a bass that echoed in the cushioned room: around 2000 violent crimes are committed in the capital per 24 hours among which around 200 rapes!

At the start we learned a few easy tricks:

* always carry your handbag on the side of the wall while walking. That goes for the mobile as well that one can easily hide under the hair while talking into it.

* If you see a gang of suspect men standing on a corner, change pavement or tube-station, walk calmly, with a straight back and a steady pace. DON’T show how your legs are shaking or your breath getting shorter and shorter!

So the first lesson is to AVOID becoming a victim. Stay alert!

It wasn’t enough to sit around and watch the well-trained policemen talk: there would be action! Most girls were in their 20s or 30s. Stéfie told me that she was tired of the guys in her school calling her “hore”. Her friend Darlene had been aggressed by guys in the subway. Iris, a long blond girl, just felt like “slapping all stupid guys!” But there was no time for long interviews because we had to get our pulse going!

During half an hour, we kicked, jumped, turned and learned that the elbow can be a dreadful weapon. The hands were used flat as fists can injure more than necessary both the aggressor and ourselves. Two flat hands hitting the aggressor’s ears time and again is very uncomfortable! Between his legs is otherwise the most efficient.

Having worked up a good pulse, we were divided into two groups and placed two by two. One got a thick mat to carry for the other to hit and then we changed positions. The exercises finished with loud screams because it’s of utter importance to scream and hopefully scare the assailant and alarm by-passers. We also learned how to get out of a strangling grip or a grip around the waist from behind. We tried out on each other until we were quite good at defending ourselves.

The streets have become men’s territory. Yes, even in Paris! Well, of course depending on the area and on the hour. As in any large city it’s wise to think when and where to walk home alone. The level of sobriety is also important…

”A verbal aggression is the opening door to an eventual physical violence” one of the leaders explained. ”Don’t answer and don’t ever let anybody come to close to you”. That’s the first test of how one reacts. If you then shrivel up the assailant will notice that you’re afraid. There are three different ways of communicating.

* the body (shows if you’re an easy target or not: walk with your head held high without looking the aggressor in the eyes (that could be taken as a provocation), keep your hand opened in front of the body because that has a calming effect and stand steadily with both legs.

At the same time, be observant: look for details to remember such as hair- or eye-colour, dress, eventual scars or tatooos. In order to then immediately report the event to the police.

If aggressed cover your head with the arms, if followed try to get into a shop or get help from by-passers otherwise better to turn around and face the assailant and try to talk sense to him. If attacked in a subway or a street with people don’t only scream “help” but point to a specific person: “Hey, you there with the blue shirt, help me!” It’s much more difficult to avoid helping when specifically designed to do so. If you witness an aggression, help or call the police. Be observant: maybe the aggressor isn’t alone!

The last test was to react towards the leaders who were walking around the room, aggressing us. We thus had to try to defend ourselves. How was it? I was supposed to hit with the elbow there, kick on the leg there, jump around, try to get away, scream… help my neighbor. It will take some more exercises before all this becomes a reflex I thought.

To conclude: avoid aggressive people and if worst comes to worst: yell, hit hard with a flat hand towards the nose or between the legs and run as fast as possible! We had fun, learned a lot and increased our self-confidence.  Nevertheless, I decided to take the bus rather than the subway home that evening…