It’s not only the Geneva-talks and the hideous proofs by one of Bashar el Assad’s own men of his government’s systematic tortures that make headlines – there has also been relevant news for us Swedes. Two of our colleagues: the journalist Magnus Falkehed and the prized photographer Niclas Hammarström were both released  January 2014.They had been captured on their way out of Syria after having completed a reportage on the doctors operating there. The discussions surrounding their release have been plunged into a diplomatic silence. However facts are that Syria – still in the hands of the bloodthirsty Assad – is being torn apart by more or less extreme groups backed by Saudi Arabia, Iran and others. With weapons circulating freely, the civilians are living in fear, in famine or in refugee camps in neighbouring countries.

In 2013, Syria was considered one of the world’s most dangerous countries for journalists with fifteen journalists killed during one single year. Despite that and for the sake of informing the rest of the world about what’s going on inside this war-zone, some journalists such as Magnus Falkehed and Niclas Hammarström don’t hesitate to risk their lives.

“Especially we journalists have to speak up and say the truth” the Syrian refugee and former media-star Ola Abbas says “even if it means to loose everything!” 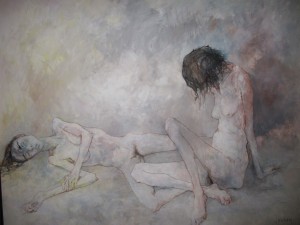 Ola Abbas – a beautiful young Syrian woman – fled her home country and reached Paris, France, 22 July 2012. This popular journalist, despite her wealth, independence, husband, family, friends… couldn’t stand any longer the lies she had to tell her people in the daily news reports. She was working for the state television, taking orders directly from Bashar el-Assad’s government. This and much more she writes about in her book  ”Exilée” (Michel Lafon, 2013) from Paris.

Ola admitted to never having been one of those subdued Oriental girls “maybe thanks to my mother who was a teacher and an intellectual” even if she couldn’t bid her farewell when she fled and has no more contact with her as she supported Assad.

Early on Ola wanted to be independent and through her job at television she became an example for many women in this highly patriarchal country. The book honours therefore also the modern, free woman but how can there be freedom for anybody now in Syria? What happened to the dreams of the millions of democracy seeking Syrians who went out to demonstrate when all hell broke loose three long years ago?

Ola had friends in both camps when she fled, but it was through her revolutionary friends and their stories about the realities of what was going on in her home land that she eventually understood what was really happening and that she was Assad’s spokeswoman – feeding the population with his lies whilst he was killing his own kinsmen.

The final drop came when she understood that Assad’s men didn’t even stop at the killings of children or the use of chemical weapons against civilians. According to her and to another famous dissident, Ahmed Khatteb, those were Assad’s deeds. We follow her anguish through her story, torn as she was between her soul and her job. She tried to pull out and gave all kinds of excuses not to come to work but of course she knew that resigning equalled certain death. Finally however she couldn’t take it any longer and decided to write a manifest in favour of the rebels that she published on Facebook.

After that everything accelerated: she was threatened and had to leave the country within 24 hours with the help of her contacts. She couldn’t even bid farewell to her family or friends, gave her cherished dog to a friend and was smuggled out of the country to Lebanon and continued on to France – the country of “freedom”. The French journalist association helped her to write and publish this moving account. She still hopes that her country will be liberated from Bashar el-Assad and that democracy will eventually prevail.

In any event, her story, as well as the ones told by the journalists risking their lives for the sake of telling the truth, deserve our respect. It’s thanks to courageous people – daily heroes – that follow their hearts rather than choose to close their eyes to the lies just to be able to continue to live a life in comfort, that we can still call ourselves “humans”.