This famous war correspondent and writer has been working in most hot beds since Palestine’s first Intifada in the 1980s.

Marriage and maternity changed her life somewhat and since a few years back, she’s established in Paris. However can one ever let go of war-memories? 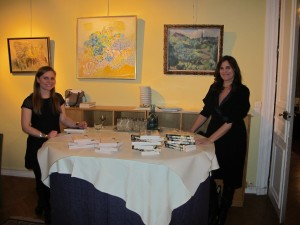 I met Janine and read her memoir to find out.

Janine di Giovanni’s memoir is an emotionally charged book about her experiences from some of the worlds’ worst war zones. However it’s also a book about love, maternity and friendship. A book that touches upon different aspects of a fully lived life.

– Which war touched you most?

–  Definitely the Balkan one. Still 19 years later the memories haunt me. From one day to the next the life we had gotten used to disappeared: no water, no television, hardly any electricity… the elderly froze to death in their beds. I left Sarajevo with the last bus and saw a woman hand over her baby through the window to an unknown man with a simple plea: “please save him!”

But all wars are horrible – Rwanda, Sierra Leone, Bosnia where we didn’t do anything for three years despite the fact that the war and ethnic cleansing went on practically under our noses!

–   Do you see any similarities with the Syrian war?

–       Politically it’s totally different but humanly it’s similar to the Bosnian one because civilians are targeted. In Syria they use barrel bombs dropped from helicopters. These fall on innocent people and cause huge damages. That war is far from over.

–       Yes, definitely but my heart has always been close to the affected children. There are 2,5 million refugees in Lebanon, Jordan, Egypt, Iraq… among whom many are children that don’t attend any schools. There aren’t any functioning schools within Syria either anymore. It’s an entire generation gone forever, growing up amongst hatred and fear. The only thing that thrives within them is a need for revenge. I’ll never forget the 12-year old orphan that I got to know in Sarajevo. He was already old despite his young age….

–       Do you see any difference between being a woman or a man as war correspondent?

–       No, but I find there is a difference between being a mother and being single. I have never been as afraid as when I became a mother. Afraid that something might happen to my baby, to drop it… I’ve seen too many injured children I guess. I remember one little boy from Southern Sudan whose parents had died and he was taken care of by his uncle but even he died… There are more than 60 000 abandoned children in UN-camps.

–       Is it possible to leave all the horrors of war behind you and start living a tranquil life taking care of your son?

–       It’s difficult but I don’t have any major life marks from those years. I took part in a study about PTSS (Post Traumatic Stress Symptoms) and I didn’t suffer from that as opposed to many photographers. I think that my writing has been a kind of self-therapy. However I do suffer from terrible guilt attacks at having left so many people behind. Those experiences have also taught me thankfulness and never to take anything for granted such as, electricity, working toalets, heating…

–       Has 9/11 in New York altered the situation for female war correspondents?

–       Yes quite a lot. Firstly, American correspontents in general aren’t appreciated anymore as they used to be. Then some parts of the world, like Northern Syria for example, are impossible to report from because of sexual harassements, rapes, kidnappnings… Thirty  journalists are currently missing.

I was grateful to have met this exiting and brave woman the day after she flew in from Jordan and before continuing to Egypt where she went as an expert for UNHCR on the Syrian refugee problem.

Her deep concern and approach towards the afflicted elevates her to more than a mere reporter – it makes her a humanist with a profound sense of empathy especially for children and elderly.

Her numerous articles and texts show this sense of justice and she really deserves the prizes she’s won: National Magazine Award, USAs most prestigious journalist award, and two Amnesty International Awards for her work in Sierra Leone and Bosnia. Newsweek and Vanity Fair publish her articles regularly.

The memoirs bring about of catharsis after these difficult years, despite her deep love for Bruno, her former husband – the French war-photographer with a penchant towards alcohol. His difficulty to live a “normal” family life in Paris, after years out in the field, is portrayed with tenderness. Everybody can’t manage to live with war traumas.

Maternity is probably an asset because women seem to be able to handle quite a lot to protect their children, as Janine is a living proof of.