Mona Hatoum – Palestian born and raised in Lebanon – but since 30 years living in London, shows her surrealistic installations, video films and sculptures in Paris. 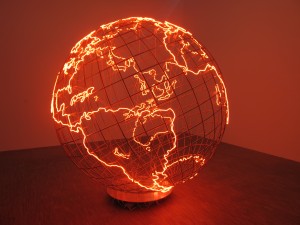 Mona, born in Beirut by Palestinian parents, was stranded in London during Lebanon’s civil war in 1975. She started to study art and stayed in in the English capital. Since 2003, she travels between London and Berlin. Most of her 110 works shown at Pompidou are about exile, frontiers or identity seeking. 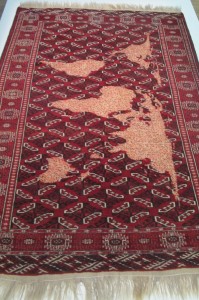 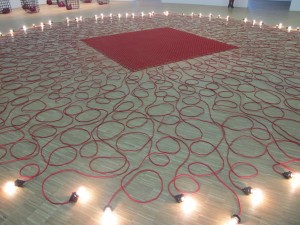 This monographic exhibition is in a thematic rather than a chronological order. The order of the world is compared to the individual for this woman whose roots have been pulled up too many times.

She made her name through her performances and videos with political and social ideas. In one of those we see her barefoot in one of London’s poorer areas, dragging a pair of boots (the kind used by English policemen and skinheads) she’d tied with shoelaces to her ankles. The individual vulnerability is thus opposed to the State’s or the groups’ oppression.

However she also makes gigantic, funny and/or scary objects, installations of furniture or of everyday objects. The visitor might for example wonder about an over-dimensional grater with its sharp sides. Could it represent the danger existing in a kitchen or the patriarch? Mona is a true feminist. 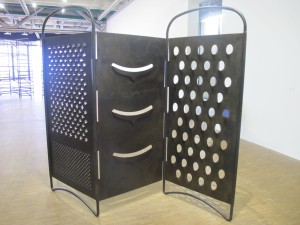 In her minimalistic works, hairs she’s embroidered are also exposed. Funny “eye-catchers” emphasize her sense of the absurd. Nail cuttings and videos exposing the inside of the body can be viewed as if the human body was but material. Are humans thus only being used, as if they were devoid of soul, by unscrupulous companies? Or is it the doctors that she criticizes? Her work can be seen differently, depending on its audience. Mona doesn’t want to give the lead but lets each one of us make up our own mind. 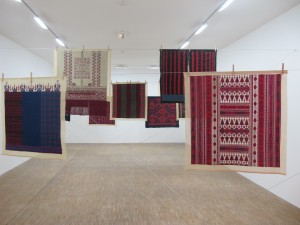 Parallel to her minimalistic and individual objects, Mona creates world maps. Among others, a beautiful Bukhara carpet, with the world engraved on it, was exhibited. It’s observed from South to North (and not as usual the other way around). Another map – also depicted that way – had been fabricated by hundreds of small crystal balls and laid on the floor. A third one was a representation of the globe in the form of a prison where the map is made out of red lights.

Mona isn’t afraid of mixing and researching different materials such as steal, metal, cloth and glass that she had learned how to blow in Murano. One installation shows a medicinal cabinet with grenades made of glass.

From Palestine “Twelve Windows” represent traditional designs embroidered by refugees that Mona uses to show the different regions spread all around her occupied country.

The artist displays the world in all its horrors but also with a tender humour in a true surrealistic fashion. 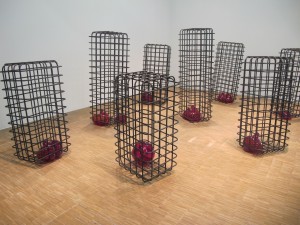