Three Ladies in Cairo is a combined memoir and a historical walk in a country that’s quickly changing character under the time it takes for three generations of Swedes to live there. It’s a historical novel where Egypt plays the leading role. Everything is thoroughly researched including everything that touches upon relations between Sweden and Egypt, like the Rosetta stone, the Vikings and the painter Anders Zorn and of course the three ladies that the beautiful title suggests.

Hilda as a young woman in Sundsvall

This saga starts in a Northern city, during the Swedish gold rush. In 1888, the 25 June, during the Swedish midsummer feast, when the country blooms and people in general are happy, a catastrophe strikes. The first person in the story is then introduced: the mother of Hilda, the first of the three heroines. The girl grows up without a father but is taken in by her stepfather, the town doctor, whom she helps, learning the basics of medicine. She eventually falls in love with a law student, Torsten Salén, her husband to be. Many adventures later, he ends up being appointed judge at the Mixed Courts in Egypt. Very far away from the ski slopes and dark forests of Northern Sweden! He proposes and Hilda accepts and follows him to “the end of the world”. One year later, in 1927, the book’s second heroine, Ingrid, is born.

While Hilda likes to scrutinize her new environment, comparing it to her homeland, Ingrid grows up with Egypt as her adopted country. Her life is that of a privileged young girl with a father who adores her, a nanny who follows her every step, the servants “little princess”… it’s only Hilda who is somewhat severe but mostly she worries about her daughter. Her lack of Swedish roots, what educational system to choose in Egypt and the role of girls in such a different culture.

Through Hilda’s eyes we meet an enchanting Egypt, beautiful, cosmopolitan, mystical, dazzling and sometimes really irritating too. She also discovers feminism and a changing society through her friend Hoda Sharaawi. She conducts interesting intellectual discussions, enjoys the latest fashion displayed in all the elegant shops in downtown Cairo and often goes to the Opera with her loving husband.

The Pyramids and Gone with the Wind:

One would imagine it to be a great adventure for Ingrid to grow up in Egypt – but for her it’s normal, it’s home. When’s her parents bribe her with a picnic at the pyramids instead of going to the cinema to watch Gone with the Wind, she isn’t impressed. Who cares about the pyramids when one can go and see Scarlett O’Hara?! Everything in Egypt represents everyday life for her. Much better than spending the summers in cold and rainy Sweden where they travel by boat, a three-week long journey, every year. During WWII, they can’t voyage across Europe though and Ingrid is relieved to be able to spend her holidays on a warm sand beach in Alexandria instead. The country soon afterwards undergoes deep political upheavals. The Mixed Courts definitely close in 1949. The Saléns leave Egypt.

Ingrid has to face a new reality: life far away from her beloved adopted country. Fate will have it that she’ll come back much later though, in 1975, as the wife of the Swedish Ambassador, Axel Edelstam. The family follows suit and the third lady in the book is introduced. It’s Anne, the author, and the book changes style, switching from third to first person.

Hilda considered Sweden as her home, while for Ingrid it was in Egypt that she grew up and Anne was more like a nomad, following her parents around, as is often the load of diplomats’ kids for good and for bad. Anne’s university studies in Egypt and her later work as a journalist, and maybe also a touch of her grandmother’s curiosity, leads her to dig deep into the history and culture of Egypt.

Anne in the desert

Anne returns however to Europe where she marries and her trips to Egypt take a brake during her own children’s childhood. It takes world events to make her start to come back in the beginning of this century on a regular basis, now as a mother and a journalist. She discovers a society in upheaval, not unlike the upheavals her grandparents lived through in Egypt in the end of the 40s. Who are those women clad all in black she wonders and these bearded men? Is a different Egypt being born under her eyes? Not so, this grand country shall take yet another surprising turn.

From enchantment to complexity:

Three Ladies in Cairo has been hailed for its profound insights and complexity by several different distinguished readers – such as Boutros Boutros Ghali, former UN Secretary General; Charlotta Sparre, Ambassador of Sweden in Cairo and H.H. Princess Melekper Toussoun of Egypt. The latter specifically gives credit to the book’s way of giving life to a time long gone, when Egypt was recognized for its elegance and cosmopolitan grace.

This book is a must for anybody interested in learning more about Egypt, as it used to be and how it has become but it’s also an irresistible novel, combining the feeling of Out of Africa and Buddenbrooks – except that the story isn’t only about Egypt’s glory and fall but also about its way back again. After all, Umm El Dunya (Mother of the world) has known hard times before. Anne Edelstam’s depiction of Egypt goes through all spectrums from the brightest to the darkest to end on a hopeful note.

Cover of the English version of Three Ladies in Cairo 2014 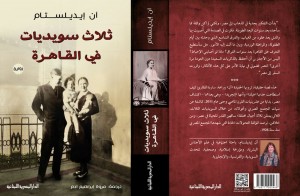