Every day’s poetry is the name of this spring’s exhibition at Waldemarsudde – Prince Eugene’s Museum – in one of Stockholm’s beautiful parks. The visitor meets the Spanish surrealist Joan Miró – one of the 20th century’s most famous artists – with his sculptors, paintings and posters with poetic titles. 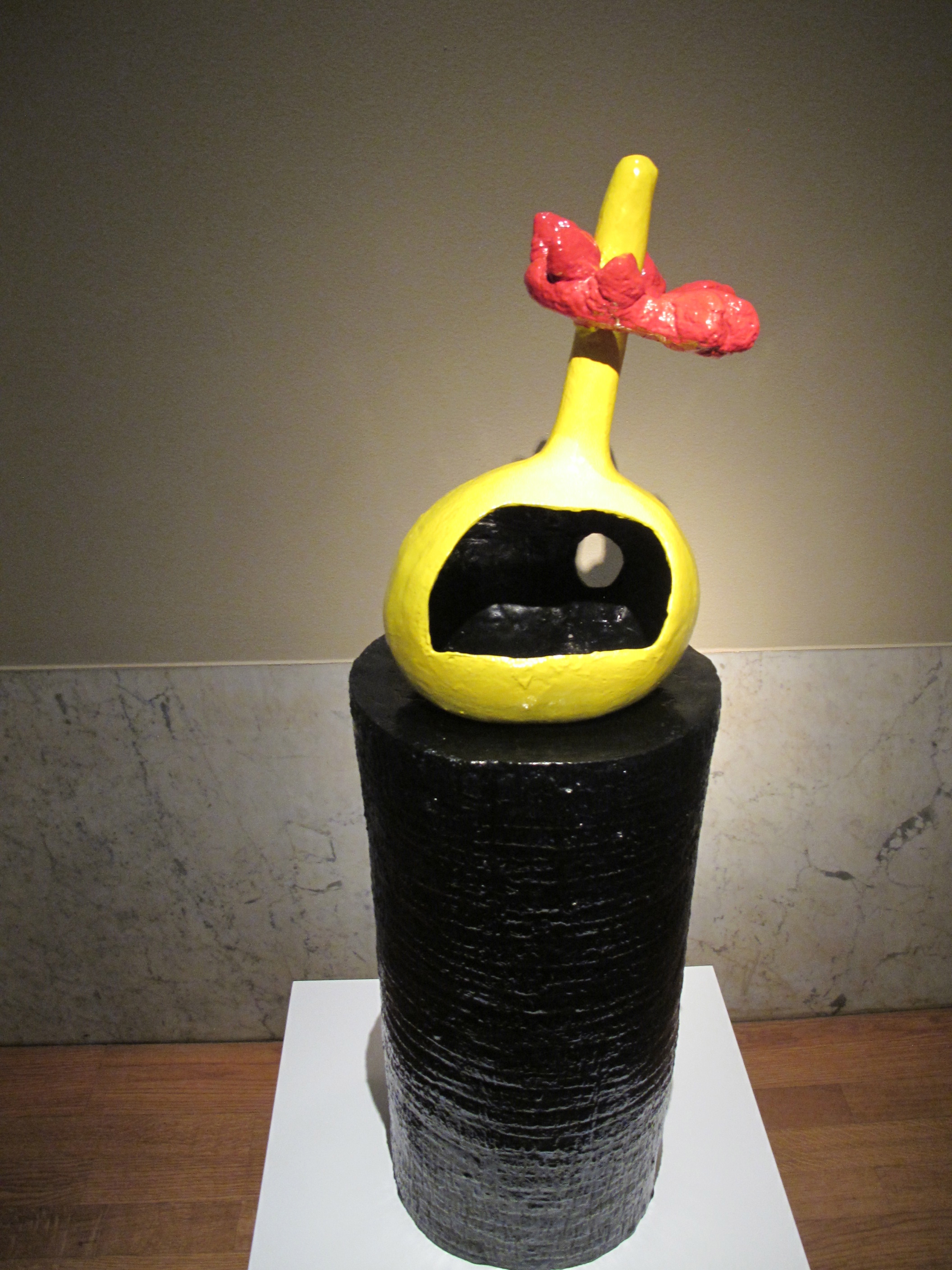 The Modern Museum in Stockholm showed a retrospective of the Spanish artist some twenty years ago but this retrospective concentrates on his later works. Two major themes are displayed in this exhibition. The first concentrates on the trivial objects and assembled into sculptures to which he added poetic titles such as Beautiful Blondes attracting Butterflies. Poetry is always present in Miró’s works. The second theme shows his socially engaged posters for freedom of speech and against oppression. He could thus reach a broader public, which was his aim as a fervent opponent to Franco’s dictatorship. 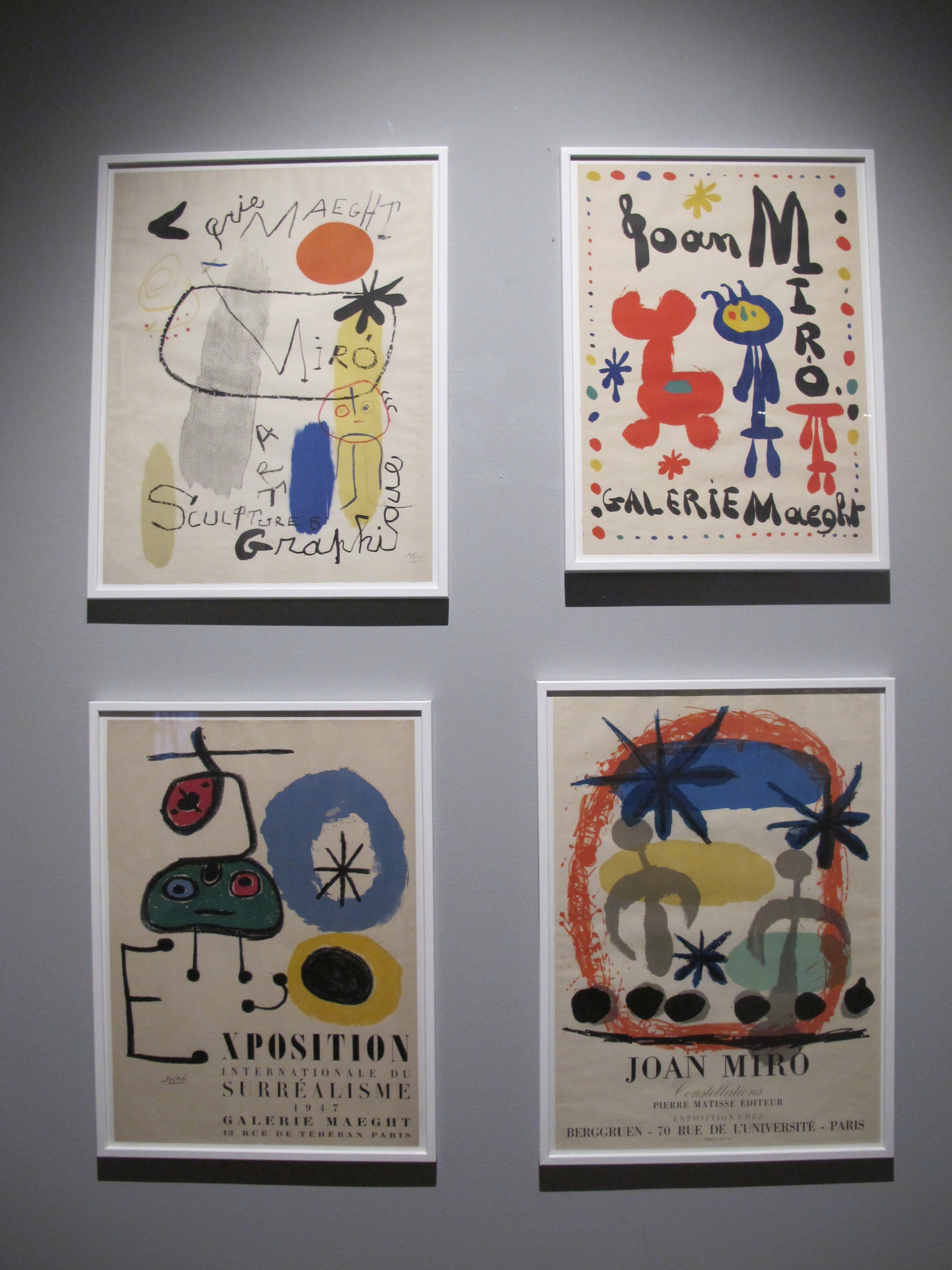 Born in Barcelona, was a Catalonian painter, sculptor and ceramist. He moved to Paris in 1920 but continued traveling back to his hometown during the summers. In 1927 he married Pilar in Mallorca and a few years later, their daughter was born. He soon became internationally known as a surrealist and independent painter. He disliked the conventional way of painting that he thought of as “bourgeois” and declared himself as a “painter killer!”

Miró’s free mind is obvious in his sculptors. They are mostly an assemblage of different objects he found such as a shoe, a hat, a bicycle steering, a wheel… He was one of the first recycling artists. During the -30s his surrealist universe was composed of wood and steel. In 1940-41, he discovered ceramics and developed that artefact together with his childhood friend Artigas. Some works were later cast in bronze. 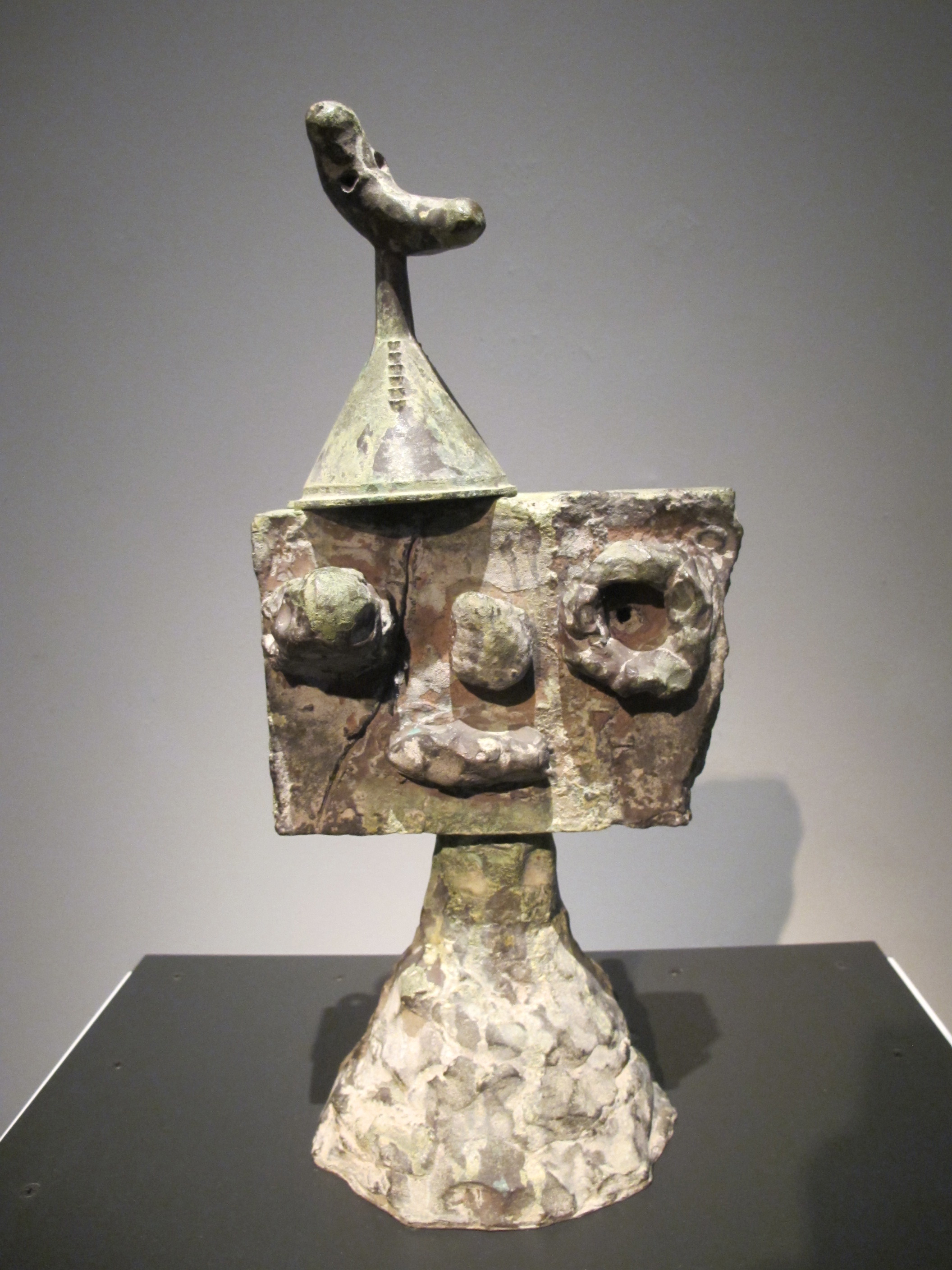 During his later years, he sculpted more than he painted. Between his 50th and 90th birthday, he made more than 500 sculptures and 400 ceramic works. “It’s through the sculptures that I am really creative. Painting is more conventional,” the artist admitted. Through this three-dimensional world, Miró doesn’t recreate the world as much as he enchants it with his strong, primary colours and engaging poetry.

During his cooperation with Fondation Maegth (in Southern France) that started in 1948, his sculptures became monumental. Later on, Fundació Joan Miró – beautifully situated outside of Barcelona – that has been part in this exhibition was created. 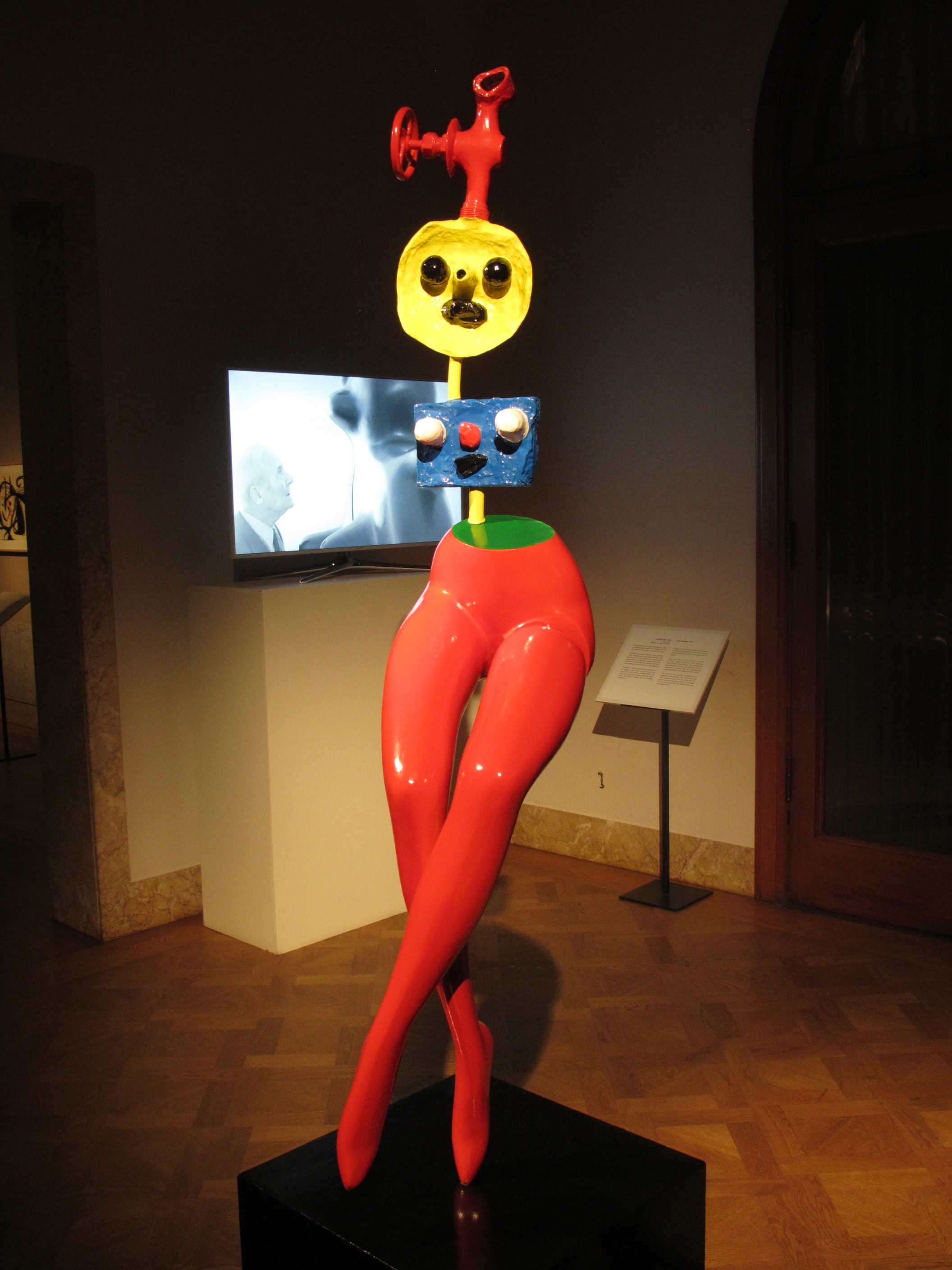 Miró’s creative process can be watched during a documentary – showing his unexplained, sudden, instinctual spontaneity. The visitor can watch the artist’s mostly ritual game between imagination and ordinary objects before they become sculptors given poetic names such as Moon bird or Woman with unruly hair. 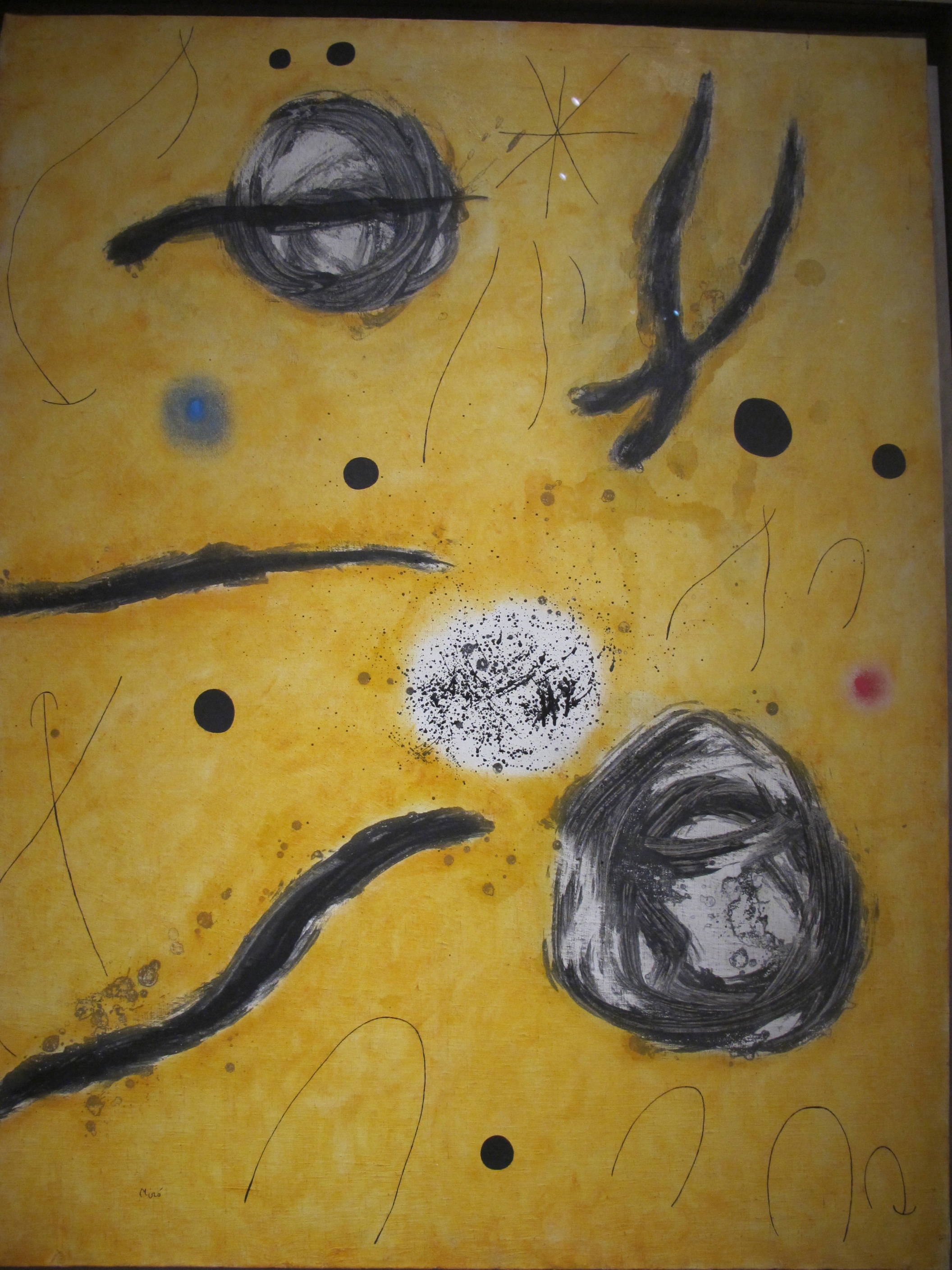 This unusual artist, using recuperated objects, is actual as an inspiration to a less consumerist society – a world of poetry and joy so very needed nowadays. 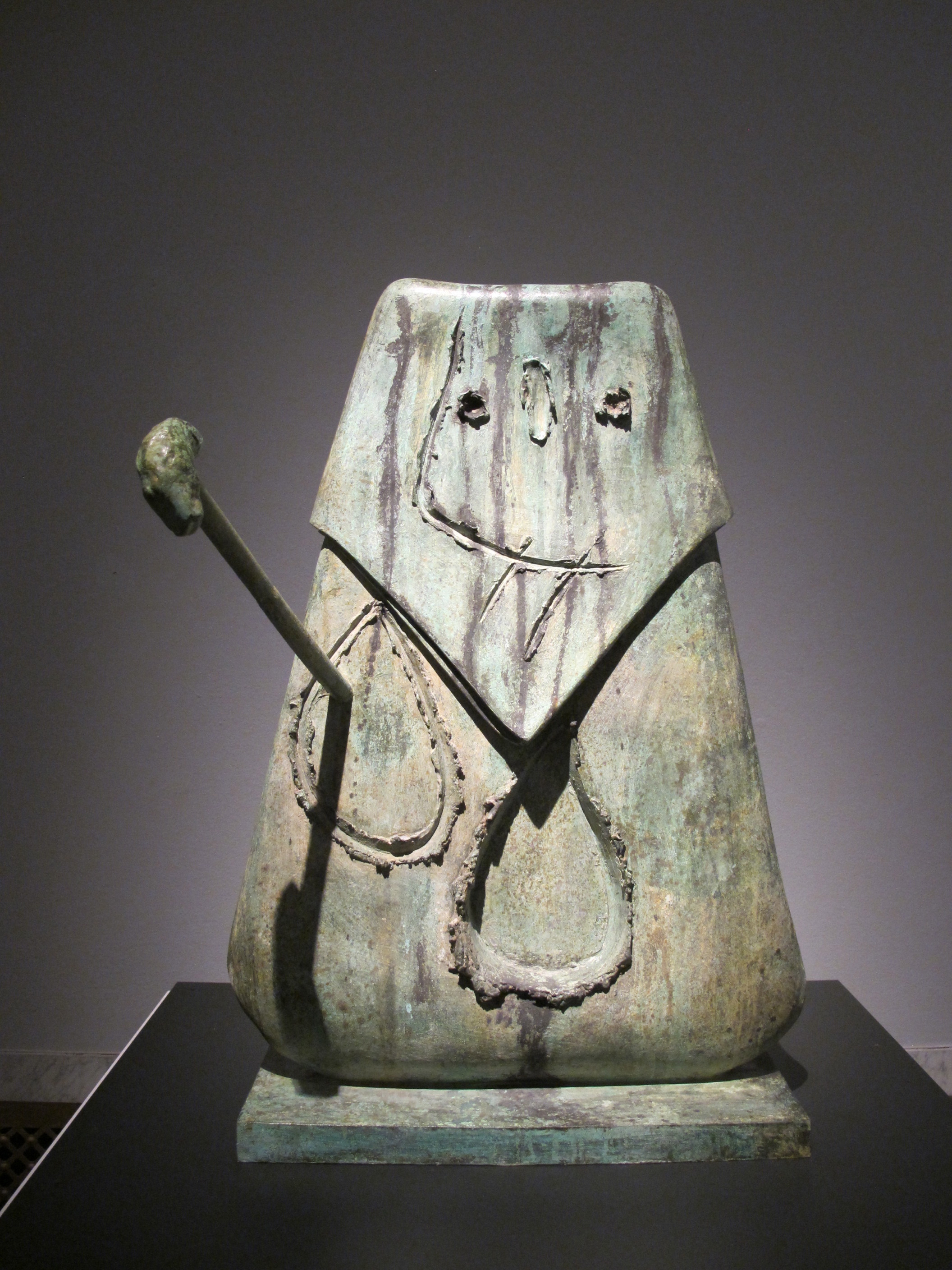