Robert and Sonia Delaunay were known as pioneers in abstract art. However it’s mostly Robert who is known. A large retrospective of Sonia’s works shown at the Musée d’Art Moderne in Paris was therefore very welcome. 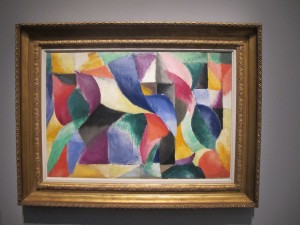 It’s not easy to separate them: both swim in a sea of clear, primal colours with a passion for circles and optical effects: that came to be known as the Orphism art movement.

“I don’t want to paint either objects, perspectives or volumes anymore, long live colours!” Robert wrote in 1912 and Sonia answered him by painting “Les prismes électriques” with sparkling colours. Despite that Sonia was totally ignored by the critics. The poet Guillaume Apollinaire, although being a close friend, didn’t even mention her work when he stated: “Robert Delauney has revolutionized art without knowing it by reintroducing light and colours!”

Few critics talked about Sonia as the true avant-gardists’ master. The exhibition at the Musée d’Art Moderne was an attempt to rehabilitate her image. She also contributed to her own depreciation by taking an honour in publicizing her husband’s work in favour of her own. Maybe that was a conduct typical of the time, as women didn’t enjoy the same status as they do nowadays.

Born in Ukraine, then part of the Russian Empire, from an early age she was taken care of by her mother’s brother, Henri Trek, a member of St Petersburg’s influential bourgeoisie.  She got a privileged upbringing with several trips to Europe and art-interested grown-ups. Sonia stared her artistic career in 1904 at the Karlsruhe’s art school in Germany.

She started off painting mostly portraits where the light in the form of shadows revealed the person’s feelings. Two years later she moved to Paris where she became Rudolf Grossmann’s pupil whose style influenced her in the beginning of her career.

In Paris, Sonia Trek discovered the fauvists, Paul Gaugin and Vincent van Gogh. She continued to develop her portraits by introducing clear colours that she used to create different facial expressions. In 1907 the year of her first solo-exhibition, she met Robert Delaunay. They soon became inseparable and married in 1910. Partners also in the arts, they tended increasingly towards the abstract. They declared, in 1912, having invented a new art form: “simultanéisme”, based on the dynamism of colour.

Art for Sonia represented modern life and she also incorporated poetry, publicity and fashion in her works. 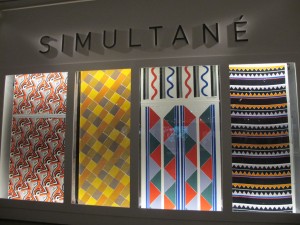 During the war, the family (together with their only son, Charles) ended up in Portugal where Sonia discovered flamenco. This dance inspired her to paint swivelling dancers in colourful skirts. A few years after WWI, in 1921, the Delaunays returned to Paris where Sonia opened a textile atelier in their apartment. She hired Russians to copy her paintings, sew the clothes she designed and to embroider shawls. Her own logo was launched in 1925. Drawings along with clothes, textiles and theatre costumes were shown at the exhibition. 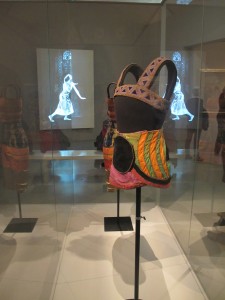 The death of Robert Delaunay:

The couple made some large paintings for a train- and aviation exhibition but then Robert’s health deteriorated. He died during WWII in 1941. Sonia who was of Jewish descent hid together with other artists in Grasse, in Southern France. There they created their own artist group and made a series of lithographs together. After the war, Sonia spent a lot of time exhibiting her late husband’s work. 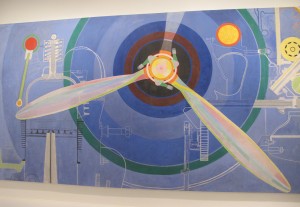 Her own international brake-through came in 1958 with her solo-retrospective exhibition in Germany.  It took another ten years for her to be recognized in Paris.

She worked until the bitter end in 1977 and even then 92 years old, she tried to incorporate art into everyday objects. Her motto was “true art form starts with the understanding of colours leading their own lives with poetic and endless combinations. Much more expressive than anything else!” So let the colours sparkle in your own lives or come to Paris and enjoy a remarkable exhibition. 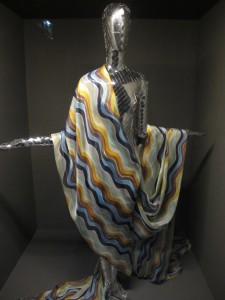