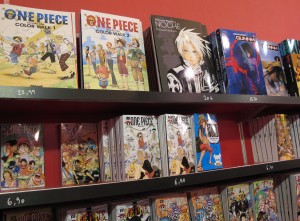 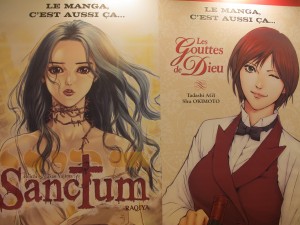 Osamu Tezuka is the name of the modern manga’s father. It was the American science fiction litterature that inspired his “Lost World” and especially his “Astro Boy”. This young robot-boy’s task was to keep the world safe after the Second World War. But in 1959, some young, ambitious manga writers decided to brake free from the tradition of writing for a younger public. They created the “gekiga” – or mangas for older, mainly male readers – in thriller style or with other intrigues. “Josbei” are mangas for women with writers such as Kiriko Nananan that later spread like fire and became more and more popular. 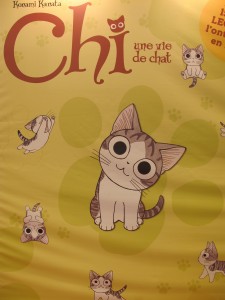 As I looked through some of the mangas at the bookfair, I was surprised to find some of their drawings – for example details on their clothes – very well made, while others – like the heros’ faces – quite simply drawn – some with just a few lines. “It’s on purpose. For the reader to identitly with the person, independently of his own looks,” Sébastien, working at one of the stands, explained to me. “There are mangas for all ages,” he continued. “Yes, grown up Frenchmen read them too,” he assured me. The cat “Chi” for example is a small country-cat whose adventures all ages follow with great gusto. The cat is simply but expressively drawn and the books are small and easy to put in a pocket or a purse. Cheap too. So why not?

That one of the world’s most read book – the Bible – could become a popular manga was beyond me. But I got to rethink when I read one of the five numbers that has been published and already been translated into 21 languages and been printed in more than 2.5 million copies! A gang of Japanese artists have made the Bible accessible to all this way. The drawings are well-made and each page in the manga has the reference to the bible-book and its chapter. 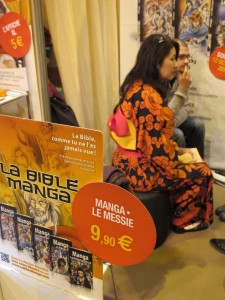 Mangas are published as series. Some weekly, some monthly, others more seldom. I even found well-documented mangas relating the Vikings – called “Vinland Saga”. Another series looked like the Wild West. Also very popular according to the salesman.

The French first discovered the mangas through television, some twenty years ago. The published mangas became popular in France in the beginning of the year 2000. David, a teenager I met, said that he only read mangas nowadays. His elder brother, Lucien, told me that he had friends who studied Japanese at the University and who wanted to travel to Japan thanks to the mangas he had read. 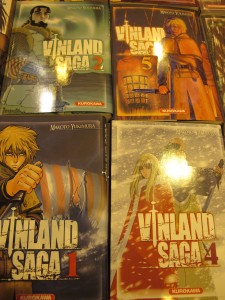 As I walked around the bookfair and looked at different mangas, I was drawn to a poster with a magnificient drawing of what I expected was a manga hero. I went to the stand and started to look through its few books on display. Patrick Marty, the French writer, was signing books. I asked him if he was the first Frenchman to write mangas. “No, these aren’t mangas,” he answered me. “The man who makes the drawings is an elderly Chinese,” he continued. Patrick frequently travelled to China and had been fascinated by an antique Chinese hero from around the year 1000. It was the judge Bao (999-1062) that represented the honest judge who hated corruption. The tiny publishing-house, Fei, in Paris, started up in 2010 but has already reached an audience. The drawings are exquisite and even enlarged, they don’t loose in finesse. On the contrary. A new style has been born, I’m positive. A mixture between the manga and the litterature where the written word is maybe a little closer to the classics. 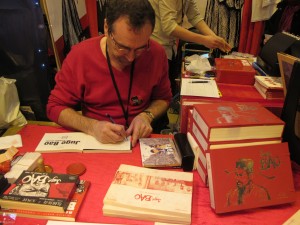 In the same time as the Paris bookfair, the Asian Musée Guimet, in Paris, showed a small exhibition. It was a homage to a local Japanese paper and especially to its journalists who continued to work despite the catastrophy. One year ago, on 11 March 2011, an earthquake followed by the gigantic tsunami that we’ve all read about, struck Japan. This led to the radioactive leakage in Fukushima’s nuclear reactor due to a fissure. Despite the dangers and the damage to the reactor, the journalists contined to amass information for their daily, Ishinomaki Hibu Shimbun. They had heard about previous earthquakes that made people panic and wanted to help as best as they could. They were also eager to stop rumors and the disastrous consequences those could have, so they set out to verify the informations they got in order to give their readers news that were as correct as possible. As both the computers and Internet were out of order, they wrote the news on large banderols that they put up on specific places in town. 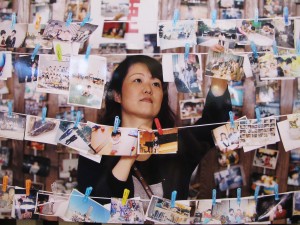 Other official papers have been criticized because they covered up both for the government and for Tepco – the company that handled the reactor –  and kept the inhabitants in the dark as to its dangers. How could Japan allow another Hiroshima to happen? How could they be so naïve? Many wondered. How could they then after the disaster, withhold crucial information about the importance of the radioactivity and its hazards for Fukushima’s inhabitants?

Moto Hagio – a well-known manga writer for young girls – was one of the first to understand the extent of the situation. Her hero, Nanohana, has lost her home and her grandma but doesn’t give up hope but finds different solutions for a better life. Moto researched the consequences of Tchernobyl and used her hero to help out through what she learned from that tragic experience.

Many Japanese start to think about the alternatives to nucear power and about the independent role of the media in their country. Questions are asked. They might not yet be able to find the right anwers. But we should all ask ourselves these crucial questions. Because today we aren’t confronted with national problems or solutions. The world is global. Even for us journalists and for the manga writers as for all you readers. We’re all responsible for our lives and for our societies. So, yes, lets ask those unconfortable questions.