Waldemarsudde, the Prince’s castle, situated in one of Stockholm’s largest parks, is a jewel in itself. Prince Eugene not only a painter in his own right was also a sponsor for other artists. Continuously, exhibitions are shown in this beautiful place. 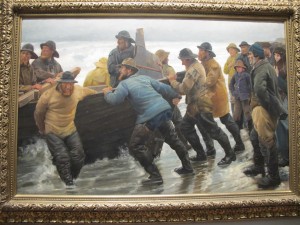 The Nordic light is known for its clarity and in Northern Jylland, in Denmark, it’s especially remarkable, reflecting as it does in the sand-dunes and the sea. The artists of the time flocked to this small fishing village, called Skagen. The visitors discover the fishermen’s misery and dangerous living through some realistically painted works of art at Waldemarsudde.

This particular art-colony – rebel at heart – was created in 1870 (-1910) to share ideas and to exchange ways of painting. Norwegians, Danes (among others Anna Ancher, P.S. Krøyer, Viggo Johansen, Christian Krohg) as well as Swedish artists (Oscar Björck, Johan Krouthén, Wilhelm von Gregerfelt and Anna Palm) and a few other European countries. Added to the relationships the artists created with each other, their relations with the inhabitants became just as important. 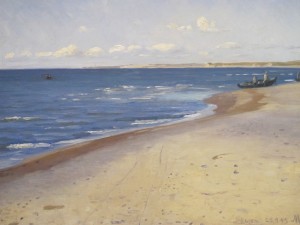 The paintings concentrate mainly on the sea, the fishermen with their lives and anguishes (like the one when a boat sinks), the surroundings with the sand-dunes and the postal-carriages that once in a while brought news from the rest of the world but also the festive parties including foods and drinks.

What all these works of art have in common is the specific Nordic light. Many Scandinavian artists studied painting in France with the great masters but that light they could only find in Scandinavia. A light that strangely enough few European artists have shown any interest in… The art-colonies bloomed in the end of the 19th century in reaction to both industrialization and art-academies considered too conservative and old-fashioned. On the contrary, the outdoor life, the solidarity and the support among artists with similar interests inspired and stimulated them. The influence of the impressionists and the realists are evident in their works.

On the way upstairs to the Prince’s atelier and another exhibition, I stopped by his beautifully decorated living-areas – where the flower master creates miracles. 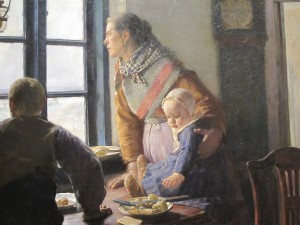 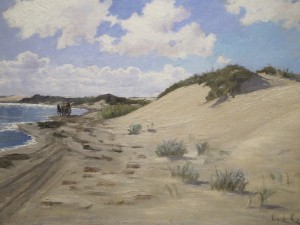 Was one of Sweden’s best-known furniture designer, pedagogue and interior decorator. The exhibition shows some of his most intricate pieces, borrowed from privates, institutions and museums. It’s a true opportunity to view works never shown before. 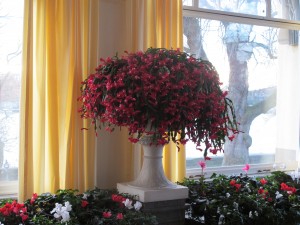 During the 20s he collaborated with one of his times’ most important architect, Ivar Tengbom.  His luxurious and exclusive furniture with expensive intarsia from exotic woods came to be known as the ”Swedish Grace”. He became internationally known during the International Exhibition in Paris in 1925, thanks to his works for the Concert Hall (1925-26) in Stockholm and to the office of Ivar Krüger in his palace (1926-28).

However he also made simple functional furniture for the common man. To show these simple but elegant pieces, he opened a shop in 1930 that still exists to this day as well as some of the furniture, like the chair called “Little Åland”.

Thanks to his skills as an educator, his craft has survived and continues to thrive.

In Stockholm, don’t miss this princely place – whatever exhibition.