The first of May 2015 was unusually calm in this mega-city where disillusioned workers have often been on strike these past years. However there exists a parallel society with workers who can’t go on strike, who lead a tranquil and tiresome life, contributing to the inhabitants’ wellbeing. 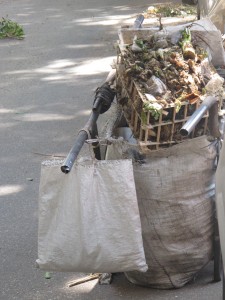 Four turbulent years with two revolutions – with tourists and investors who’ve fled the country – have put the country’s economy in a dire situation. The tens of thousands garbage collectors – or zabaleen – haven’t changed their way of living though. They’ve continuously collected and sorted out garbage, living on the outskirts of the city, in the Mukattam heights, in shantytowns or abandoned tombs.

Early every morning they trot down from the hills on their donkey cards or in old vans to collect the inhabitants’ garbage. Some districts – like the ones where foreigners and the well-off Egyptians live – are the most sought-after. There they can find treasures like empty cream boxes that their clever artisans transform in their workshops into beautiful vases or glasses in different colours. These are then sold in the city’s fancy shops. 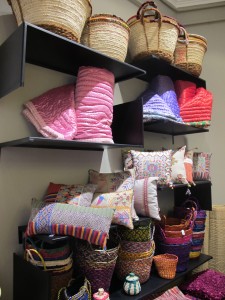 Long before we in the West started to even use terms such as recuperation, it was used in Egypt. Since nearly a century, the zabaleen recuperate daily 80% of the inhabitants’ garbage, or more than 3200 of 4000 tons! After the morning garbage collection, they head back to the hills where the entire family (of all ages) helps to sort out plastic-, glass- and metal-objects before these are sent to one of the seven hundred workshops to be recuperated. These tens of thousands, mostly Christians, still contribute to this essential communal activity. They used to live a very simple life until 1971 when a French, retired nun, Soeur Emmanuelle, settled down amongst them in one of the poorer shantytowns, exotically named Ezbet al-Nakhl – or the date-camp. She saw to it that each family built at least one room in concrete (instead of the cardboard ones they live in) and eventually introduced both electricity and running water. An NGO (http://www.ape.org.eg) continues her work in the same vein and assists mostly women to become economically independent by for example using recuperated garbage to create handbags, lamps and other items to be sold in smart shops downtown. They also make sure that their children go to school and get a proper education.

Nowadays all kinds of classes live there, even the better-off ones who have made a fortune collecting garbage, melting down aluminium cans and other useful articles. They drive around in smart jeeps, put their children in foreign schools, but continue to live in the neighbourhood, albeit in smart apartments. Their employees earn 8€ per kilo aluminium cans and the ones who melt them down in the hot ovens, 500€ per month which is a good salary according to Egyptian standards. The aluminium (75%) is then sold to local factories or sent overboard in large containers. The rest (25%) ashes are used as fuel.

However the zabaleens’ future is unsure when modernity’s inhuman machinery starts rolling, but the Egyptians’ deep faith and their belief in fatality help even the poorer amongst them to hope for a better future.

In order to survive in this polluted, dusty, loud, dirty, overcrowded mega-city, a large dose of humour is needed. And that, together with a humanism that has too often disappeared from Western societies, the Egyptians definitely possess. Whether beggars, Ministers, Copts or Muslims, old or young, poor or rich, everybody uses the magical formula IBM: Insha’Allah, Bokra, Malesh – God willing, tomorrow and it doesn’t matter…

Cairo is like a gigantic uncontrollable machine where the saying “the strongest wins” has become institutionalized and humor is its savior and where the parallel economy still plays an essential role. So when you wake up irritated at the zabaleens’ early morning shouts, think twice because without them, the city would be a living hell.