That’s one of the burning questions our world leaders have been struggling with at Paris COP21 during the first weeks of December 2015. My question is: can we wait for the politicians to make up their minds and act? Solutions exist and are being implemented already. In this article we’ll examine some of the alternatives to fossil fuels for our future survival. 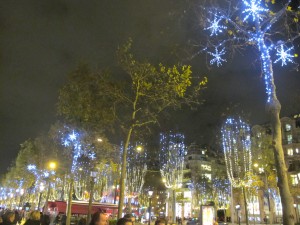 147 heads of state arrived to this well-guarded capital on 30 November 2015. Among French security guards, mourning Frenchmen after the terror attacks just a couple of weeks earlier, and a state of emergency, they took their seats at Le Bourget. Inside the compound, UN rules and security apparatus took over. However terror, refugees and climate changes are related and if one of these problems is solved, the others will follow suit. These are major difficulties that concern us all and we should all be allowed to get involved. Thus in protest over the cancelled marches and festivities, the demonstrators aligned thousands of shoes at the Place de la République, in the centre of Paris, demanding climate justice and putting pressure of the decision makers.

Many discussions later, intensive days and nights and a peaceful march, on 12 December, some 195 countries finally agreed to sign the treaty. It is a first stepping-stone towards sustainable energies replacing fossil ones but an important one. This “historical step” was a success for the French with, as the head of COP21, Foreign Minister Laurent Fabius. 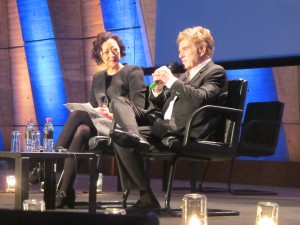 The politicians had to succeed:

Since the first climate conference some twenty years ago, in Rio, nothing much has happened. It’s definitely countdown to stop the increase in global temperature reaching above 1.5° Celsius (34,7° Fahrenheit), calculated since the beginning of industrialisation (around the 1850s) otherwise all the smaller islands will sink into the Ocean and there will be dire consequences on a global scale. According to the American Jeffrey Sacks, a visionary, and his team of international climate-experts, working for his DDPP project (Deep Decarbonization Pathways Project), we need to entirely stop using oil, gas and coal in order to slow down earth’s global warming.

Industry, automobiles, infrastructure, health, agriculture are some of the areas that have helped to increase our standard of living during the industrialization period but, since the 1990s, the curve has altered and turned into a negative spiral, leading to a net increase in pollution on land, air and water. Developed countries are emitting ¾ of the earth’s CO2 followed closely by many emerging countries such as China and India. Corruption and overpopulation in several countries make it difficult to find one major culprit. Thus the financial compensations are a headache for the decision makers. 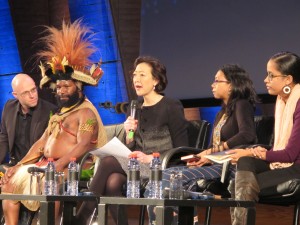 Time has come for a new revolution with innovative technologies and renewable energies. The human mind’s imagination sees no boundaries and know-hows have greatly advanced in those areas, so several engineers I talked to were quite optimistic about the future of our common planet.

Some sustainable projects are already well under way like the one in Michigan where General Motors uses garbage as fuel instead of petrol, giving out half as much CO2. Electrical cars exist and should expand as well as public transportation. Houses, apartments and entire neighbourhoods need to become eco-friendly, as is the case for example in Sweden in Stockholm Hammarby Sjöstad or in France with one of Lyon’s suburbs.

Five major challenges that faced COP21 and beyond:

According to professor Thomas Porcher from Paris School of Business the “COP meetings are important but not sufficient. We shouldn’t wait for an agreement to act but act to get an agreement.” However this agreement is a good incentive for both states and companies. A veritable turning-point for humanity and the planet. 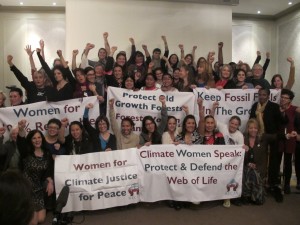 The world is in need of a “Nelson Mandela for the climate” because we don’t have a plan B or for that matter a planet B, so we really need to take this seriously before it’s too late. Each one of us, each industry, association, country must take its own responsibility and do what they can to preserve what we’ve got left. Countries like China and many major cities like Cairo and New Delhi literary choke to death. Will they do something about it or just wait around for some far away decision makers to act? People need to force their politicians to implement climate justice.

In his inaugural speech UN General Secretary Ban Ki Moon talked about the importance to reach a common agreement this time around: “the situation is unique and might not come back that soon. The time of the lone rider is long by gone; we need to unite to reach four goals: a sustainable agreement with a clear message; a radical project; dynamism and flexibility for the future in order not to have to make a new agreement; reach a balance between the developing and the developed countries. You have the responsibility to point in the right direction. The entire world has mobilized for this occasion. You have to listen to the voice of the people”. It seemed that the politicians have listened even if the end results weren’t up to everyone’s expectations. 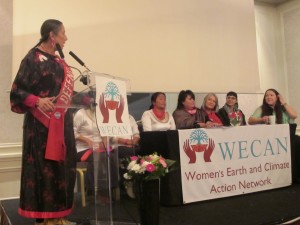 Visions for the future:

Peoples’ voices are indeed being raised and new technologies implemented. There are already sustainable energies in use and they’re increasing, urban farming is expanding, towns where the inhabitants bicycle, walk or take public transportation exist, permaculture is spreading, local money is in use in some villages, education systems are changing in some countries… It’s not science fiction but exists for real as shown in several documentaries such as in this one: https://www.youtube.com/watch?v=NUN0QxRB7e0. Small companies with one or a few people pop up and spread fast thanks to Internet.

Indigenous peoples (370 million people), although not officially invited to take part in the COP21, came to Paris to raise their voices as well. At a UNESCO conference, I met a delegation of indigenous peoples, among whom, Mundiya Kepanga, from Papua New Guinea. He gave a talk about the importance of their knowledge about the forest and their “brothers” the trees, the plants and the water. “Without the trees we’ll all disappear”, he affirmed. Their representative, Robert Redford, couldn’t but agree. 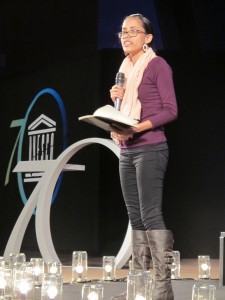 The poet and Marshall Islands activist, Kathy Jetnil-Kijiner expressed her worries by a poem addressed to her sick daughter, which temperature had gone up, skilfully and emotionally:

Her colleague, Mina Setra, representing Indonesia’s indigenous people, could testify how well activism worked: her organization has sent thousands of SMS to the governor who had agreed to mining in one of the islands until he gave up and withdrew his accord. She cried when she explained how she’d fought for her people’s survival and despite their efforts, their rights (as well as human rights in general) have been removed from the COP21 agreement (in article 2.2). As stated by Mary Robinson and agreed upon by the Human Rights Council: “Human rights absolutely relate to climate change, because climate change is undermining human rights all over the world and undermining people’s livelihoods, undermining people’s health, forcing people to leave their homes because of drought or flooding, sometimes leading to loss of life.”

“Finally this is a moral problem and not a political one and will not be solved by politicians either”, said Robert Redford.

An International Rights of Nature Tribunal has been created with international judges that have agreed upon a text that defines the rights of Mother Earth and that nature can’t be exploited without consequences. Climate meetings haven’t taken into account the fact that man isn’t separated from nature but part of it. Our laws must adjust themselves to nature and not the other way around. 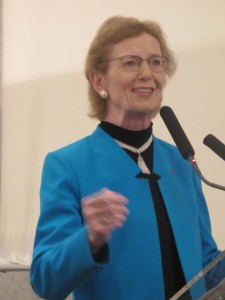 Ireland’s former President and founder of the Mary Robinson Foundation – Climate Justice as well as one of the Elders, was one of next day’s conference speakers at WECAN (Women’s Earth and Climate Action Network: www.wecaninternational.org) with Executive Director Osprey Orielle Lake. In her speech she talked about the importance of taking care of Mother Earth and the role of women in doing so. “It all starts in the home” – something the Australian woman, Natalie Isaacs couldn’t agree more upon. She started 1 Million Women with the promise of helping and instructing households how to reduce their CO2 by half with some easy tricks that you’ll find on her site. In Sweden, we’ve been sorting out our garbage years now and it’s become second nature but of course we still have lots to learn. 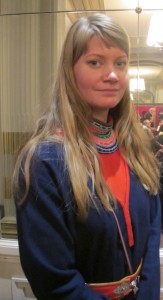 Josefina Skerk, Swedish Vice President of the Sami Parliament explained the importance of letting the indigenous peoples attend the decision-making talks because they are often the ones suffering the most from climate changes. In Sami-land they have observed how the rise in temperature has impacted the reindeers and the fish. Moreover the locations where they move with their livestock since immemorial times and where they no longer can take their animals are also filled with memories transmitted orally from one generation to the next. It’s thus a question of a disappearing culture and identity as well as a major change in their way of life. 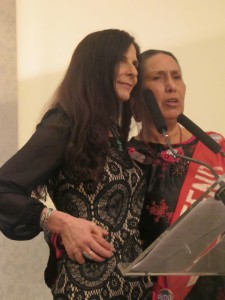 Neema Namadamu, from Congo, talked about the importance of replanting. Several African countries are involved in the project The Green Belt Movement – the idea being to plant a large forest in Africa that could take up some of the CO2. A symbolic olive tree (for peace), to be planted after the conference, had been placed in a corner of the room to remind the audience of the importance of nature.

The speakers agreed upon the fact that women and children are the hardest hit by climate changes and still women are under-represented at the global conference tables. Inside Le Bourget, the majority were men discussing our future. Despite the fact that many solutions can be found together with women whom are the ones taking care of families, households, livestock and small-scale planting. Women must make their voices heard, as our patriarchal consumer society has proven to be a catastrophe for humans and animals alike.

Few places on our planet are still preserved – one of those is a tiny area in Alaska – the Arctic National Wildlife Reserve – which indigenous people defend since the 80s against mining- and oil-digging companies trying to get their hands on what’s left. Some 140 species of birds nest there, fishes as well as polar bears and many other mammals, such as the caribou, the Indians livelihood, breed there. 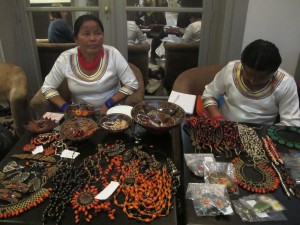 I asked one of the elderly Indian “grandmothers” why it was so important to leave the oil, gas and coal in the earth. She explained that it can be compared to drawing blood from a human, after a while the body simply can’t take it any more. The oil apparently also has a cooling effect on the earth and the coal acts like a filter for the water that we then drink. There must be a balance in the intake and the outtake otherwise we’re heading for trouble which is what we’re currently experiencing. We thus have to recreate a just and sustainable system.

Mankind is facing a choice: either we continue as before and use Mother Earth as our slave, draining her of her energy, or we rethink and clean up our mess and engage fully in renewable energies. The Paris agreement might very well be proven to be “historical”, as it seems like the politicians have made the choice in the right direction to save the planet and future generations, it remains to be implemented too on a global level. 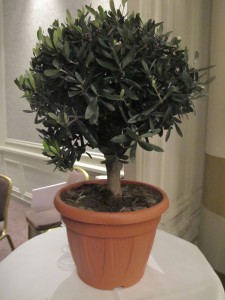