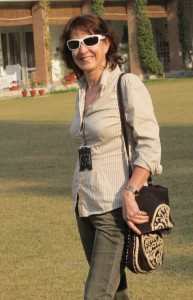 Anne Edelstam is a journalist, writer, and photographer currently living in Paris and the third of three generations of women with close      connections to Egypt.

Passionately committed to social affairs, Anne has worked at UNESCO, in Paris, and for over a decade has represented Sweden in FECRIS    (Fédération Européenne des Centres de Recherche et d’Information sur le Sectarisme), a European organisation informing people about dangerous cults (www.fecris.org).  FECRIS has organised international conferences since 1999 and has been represented at the UN for the last two years.  Anne has organised numerous conferences herself, including one about Cults and Law at the Swedish Club in Paris in 2001, and several about Egypt, the situation of women, and the rise of fundamentalism. She is also an active member of a cultural organisation about the Middle East in Stockholm.  She has set up two journals: La Gazette de Stockholm, for the French-speaking in Stockholm; and Sesambullen, in Swedish, about the problems of manipulative and fundamentalist groups.

As a writer, social and cultural journalist, and photographer, Anne is extensively published.  She has released two non-fiction books: La Vierge de l’Apocalypse (Publibook 2006) in French, about cults; and Tre Damer I Kairo (Carlssons förlag 2005) in Swedish, about Egyptian history.  She is published in numerous newspapers and magazines: most notably: Tidningen Kulturen (www.tidningenkulturen.se), where she is also the foreign news editor and writes one or two articles from Paris weekly; and Frankofon, recently replaced by the monthly magazine Svenskfranska (www.svenskfranska.com), where she publishes around five articles monthly.  She has also done extensive reporting from Burma, Laos, Vietnam, Cambodia, Indonesia, Thailand, India, and Egypt.

Anne has a B.A. in French and Arabic from Stockholm University and continued with Arabic and Islamic studies at the American University of Cairo.  Her M.A thesis in Social Sciences, Socialization of the Deaf in Egypt, helped codify an official Arabic sign-language.

Her latest articles can be found on her site, www.articlesfromparis.com, in Swedish and English. Her interests lie in art, culture, and travel and she considers herself a nomad from the North, with the world as her working-place, always fascinated by the complexity and the wonder of the human soul.   She is also a glass- and ceramics-painter, taught painting while in Sweden, and exhibited and sold her art each summer between the years 1998–2004.