The day preceding the Nobel banquet – yearly on December 10 – Paris and the Swedish Club welcomed Lennart Nobel who foretold about his family’s amazing destiny. Alfred Nobel wrote his final testament,  in November 27, 1895, at the desk still standing there – in what’s now called the “Nobel-room”. 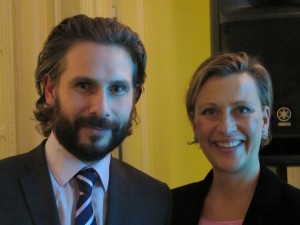 Alfred himself didn’t get any children so Lennart Nobel – mathematician and financial expert – is his brother Ludvig’s fifth generation’s grandchild. The resemblance was striking as he was standing next to the black and white photographs of his ancestors: Robert (1829-96), Ludvig (1831-88) and Alfred (1833-96). The forth brother, Emil, died at a young age in an explosion accident – commonly called the “Nobel explosion”.

The academic streak has been in the family since long. Olof Rudbeck (1630-1702) was medicine professor at Uppsala University and discovered among others the lymphatic system. He was also a botanist, historian, composer, architect and engineer as well as building bridges, aqueducts and created botanical gardens. The daughter married Petrus Nobelius which name was eventually shortened to Nobel.

Alfred’s father, Immanuel, received a technical education, became an architect and constructor. His career ended as soon as it had started when his firm went bankrupt the same year that Alfred was born. He thus had to leave his wife Andrietta with the children in Stockholm to seek his fortune in Sankt Petersburg’s mines. Andrietta opened a grocery to sustain the family and the children had to help out. It was harsh years in extreme poverty that Alfred and his brothers would never forget but that will also probably forge their strong personalities.

However, Immanuel’s work eventually paid off and when Alfred was nine years old, the family was reunited in Saint Petersburg. Having amassed a small fortune, the boys’ father gave his children a proper education with talented private tutors. They learned four languages on top of their natal Swedish: Russian, English, French and German and studied humanistic as well as scientific topics.

Saint Petersburg was then a European cosmopolitan capital with an intensive social and cultural life. The brothers Robert and Ludvig stayed on there and eventually took over their father’s business while Alfred at an early stage went abroad – traveling becoming his way of life.

He continued his studies with among others the chemist Jules Pelouze in Paris. At about the same time he started experimenting with nitro-glycerine (one of Pelouze’s students, the Italian Ascanio Sobrero, had made its discovery in 1847) and its explosive possibilities and problems.

Alfred was only thirty years old when he managed to make dynamite by mixing nitro-glycerine and gunpowder. That would be his first and maybe most important patent (of the 355 patents by the end of his zealous life!).

Thanks to the invention of dynamite, the numerous factories he started as well as all his discoveries made him a wealthy man before he had even reached the age of 40.

How happy was he though, I asked myself, when he described his nomadic life traveling in train- or boat-compartments as living in “moving jail-cells”? The famous author and his good friend, Victor Hugo, named him “Europe’s richest vagabond”.

In the mean time in Saint Petersburg, his brother Robert had sat course towards Caucasus to buy the precious walnut-trees there but instead he bought a cheap oilfield. The oil was then transported on camel- or donkey-back. When Robert was in the USA he discovered that it could instead be transported via pipes. He thus built pipelines between Baku and the Black Sea and his brother, Ludvig, drew what would become the world’s first oil tanker.

Soon the Nobel brothers were nearly as wealthy as the Rockefellers and they build a magnificent palace in Saint Petersburg that’s still there today. They lived princely lives.

However the brothers were also involved in charities. They took great care of their workers which was unusual at the time: they gave them free health care, lowered their working hours, built them decent habitats and even organized a system of profit accounts.

Maybe the family’s humanism came from the early memories of poverty? Throughout their lives all three brothers had their fellow citizens in mind, which Alfred’s testament later on would also prove.

Ludvig’s oldest son, Emanuel Nobel (1859-1932), took over the business and became a Russian citizen. He loved Fabergé-eggs and became their foremost customer after the Tsar, even distributing the expensive eggs to his guests. His generosity was especially appreciated among the aristocratic ladies. However, along with the Bolshevik revolution of 1917, this lavishness ended abruptly and Emanuel had to flee the country disguised as a simple peasant. The communists took over his business and the name Nobel definitely disappeared from Russia.

Alfred eventually decided to settle down in Paris. He bought a fashionable house at Avenue Malakoff (today’s Laotian Embassy) where he installed his laboratory (he always worked wherever he was) and his orchids. Like his ancestor he had a soft spot for botany as well.

In 1875 he advertised for a “secretary”. He settled at last for the beautiful and well-read aristocrat Bertha Kinsky that he fell in love with but she soon left him and married von Suttner (although they continued to correspond throughout his life).

The same year, he met instead the young Sofie Hess that unfortunately didn’t possess Bertha’s intellect and was more interested in his purse than in his feelings. Their relationship became increasingly a burden for Alfred. Despite that they never married, he bought her a house and gave her a monthly allowance that didn’t hinder her however from blackmailing the family after his death.  She finally settled for quite a large sum of money.

The French media was after him too and it was partly that and partly his poor health that led him to move his entire laboratory and home to San Remo, in Italy, in 1890. Four years later he bought the Swedish weapon factory, Bofors, and an estate close by at Björkholm where he also spent some time. December 10, 1896, he died in his house in San Remo. The rumour goes that there were debates as to where his real habitat was and that the final verdict was “where his horses and carriage are placed” that settled the matter and that was in Sweden. Who knows where the Nobel prize otherwise would have been distributed?

At the time of his death, he didn’t have any inheritors for his enormous fortune, his businesses and hundreds of patents. Added to the money he left for his loved ones, there were another 31 million Swedish crones (an important sum at the time) that were the base for the Nobel prizes, funded to compensate individuals that have “done the most services for their fellow human beings” within such diverse fields as physics, chemistry, medicine, literature and peace.

Nobel was also a humanist, believing in mankind and in the importance of peace. According to him, his discovery of dynamite would lead to peace because “when people understand the power of dynamite and the damages that it can cause, nobody would want to use them in a warlike situation”. That sounds very familiar to what was later thought about nuclear power though with the consequences we know…

Alfred was a poet and liked reading novels, as his large library can testify about. That the Nobel peace prize was placed in Norway is explained by the simple fact that Sweden and Norway were united into one country between 1814 and 1905 when Norway declared its independence.

The Nobel prize soon got an international acclaim mainly thanks to the high sum of money that was yearly distributed. The countess and Alfred’s dear friend, Bertha von Suttner, whose peace-engagement had strongly influenced Nobel, got the Nobel Peace Prize in 1905.

Accompanied by wonderful piano music played by Cecilia Löfstrand at the Swedish Club, the audience was thrilled by the Nobel’s family’s incredible destiny that cool December evening. To think that few individuals can make such a huge difference for mankind! 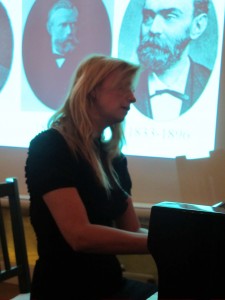 At the end, it’s always ethics, morals and humanism that decide what we do with the discoveries man has made: weather we use them to destroy and kill or to make a better world for everyone, that’s up to us.