Karl Gustav Hammar presented his newly  published book “Peace leads to Peace” at the Swedish Church in Paris. One of Sweden’s most controversial archbishops in modern times, inspired by the great humanist and UN Secretary-General, Dag Hammarskjöld, predicts a new course for the Church. 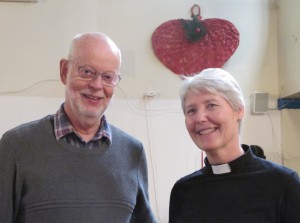 The Swedish Church in Paris:

Thanks to the welcoming and smiling priest Elna Wahlgren-Lundqvist everybody feels welcome to the Swedish Church in Paris. It’s so much more than a place of worship:

It’s an institution where newcomers come to get help and where the ones who’re already established meet up to get a feeling of being “at home”, where Swedish children flock to learn at the Swedish school and where there is a library – with Swedish books and magazines – as well as a coffee place.

However it’s also a place for debates and conferences. This time the theme was “Peace” in the company of Archbishop K.G. Hammar.

It was more the visionary than the former Archbishop (1997-2006) who talked to an intrigued audience that sunny December morning 2013. K. G. Hammar is easy to approach, open and humble, far from the formal person his former position could have turned him into.

His interest in peace was already stirred in the -60s and he reminded us that in August 2014, it’ll be 200 years since Sweden was involved in a war (if we don’t consider our soldiers currently posted in Afghanistan). A memory that also demands reflection. It’s a sign that shows that even a poor country – as Sweden was in the 1800s – can become a peaceful one. War isn’t the answer to everything.

“Jesus showed us the road: you can meet violence in a peaceful way and learn to see the humanity even in your enemy”, he said. “What you sow you reap” is a common phrase that perfectly fits his philosophy. “Sow peace reap peace”, Hammar asserted, giving us some other examples of active non-violent figures like Mahatma Gandhi, Martin Luther King and organisations such as the U.N. Because despite the criticism of the U.N., its main goal is to settle conflicts peacefully. To be a pacifist means to struggle actively for peace to solve conflicts and be prepared to meet violence without reacting violently. 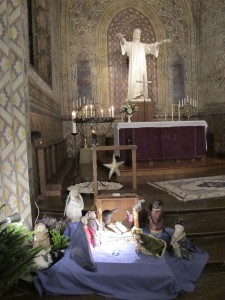 The crib in the Swedish Church in Paris

After the attack against the USA, in September 11, 2001, President Bush, started a war he called the “righteous war”. The ones who want to start a war always try to find arguments to explain their violent acts, according to the Archbishop.“Leakage” is another problem: it’s the consequence of the weapon industry. Weapons must be sold and updated. To do that: wars must be found. Old or dated weapons eventually end up in shanty-towns. In Yemen’s slums for example, there are as many as three weapons per inhabitant, not to mention the deplorable situation in the USA! However, on the contrary from what one might think, an armed man lives more dangerously than an unarmed one.

Religion has often been used as an excuse to start wars but in reality it’s not so much religion as other more vital reasons, such as lack of water, land and patriarchal tribal politics. Women the former Archbishop believe to be an asset in future peace-agreements as they are “often better at settling conflicts through dialogues than men are”. He went as far as saying that “women’s assertiveness is essential for the future of our planet”. 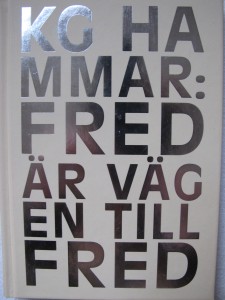 The Swedish Christian Council wants to change the old ways of thinking and introduce a demand for “holy peace” instead of “righteous wars”.

K.G. Hammar reminded the audience of religion’s holiness and how tribal gods had developed into one God for all – albeit with many different names. Jesus prophesized about “God’s Kingdom” and meant that we shall live in peace together on earth and not in some distant heaven after death.

He tried to explain his point of view through a short history lesson: around the year 300, Christianity became state religion (after years of martyrdom) but the countries had nevertheless to defend themselves. The theologians of the time thus had to come up with a solution. It was resolved with what came to be called a “righteous war” – i.e. the right to defend your country against enemy attacks. Saint Augustine, during the 4th century, decided that “proportional defence” with the help of a professional army and as a LAST resort would be accepted. That ancient way of thinking is still valid at least within the U.N.

However that doesn’t apply when soldiers aren’t facing soldiers. Currently it’s mostly civilians, women and children who are hurt in war-zones. Therefore “righteous wars” have lost their credibility. Instead we have to strive for “holy peace” through dialogues. 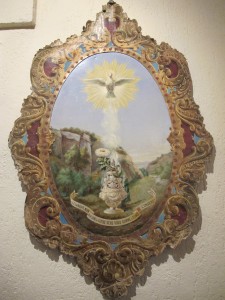 The former Archbishop and Nobel Prize-winner Nathan Söderblom (1866-1931) organized the great ecumenical meeting in Stockholm in 1925 and it’s his vision of peace that K. G. Hammar has adapted.

The ecumenical movement together with other actors have initiated a Peace Agenda for 2014. Its aim is to move military spending to civilian war prevention; from armed conflicts to peaceful dialogues, with civilian structures and mechanisms. Because non-violence isn’t about avoiding conflicts – it’s about tackling them peacefully.

“There are two wolves within each person. It’s up to us to feed the gentle wolf within us and not the evil one”. Non-violence demands thoughtfulness, control and education. Mindfulness according to Buddhists.

It’s naturally of utter importance that this move from violence towards peace happens internationally. Hence the Swedish Church is very keen on other churches joining in this “mission”. 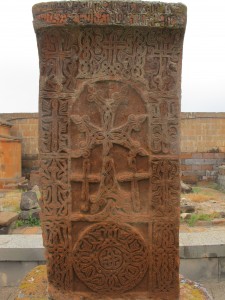 K.G. Hammar is also ”ecumenical” in his book and he lets others speak up about the peace questions. Everybody – especially school pupils – should read this instructive, easily read and beautifully designed book.

To conclude, I’ll let Henrik Grape (the Swedish Church’s ecological co-operator) have the last word: “We must all live for and strive for: peace with Earth – peace on Earth. Wasn’t that what Jesus prophesized?” 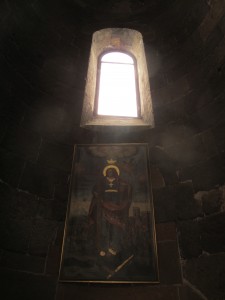