The museum’s bright lunch room – with its adjoining terrasse – is as usual full of people and the queue is long as I slip past it and dash down to what used to be the former bank’s vault but that is currently used for different exhibitions. It takes some time for the eyes to adjust to the dim light and I am taken by surprise when I’m met by an elegant man that on a closer look is one of the well-dressed up dolls. This exhibition does look more like a theater play. 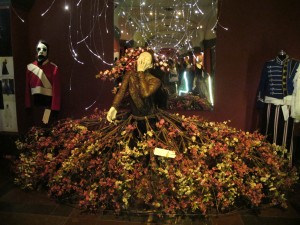 Despite the magnificient and unusual costumes that dance to their own tunes – a dance with each other where only the humans behind the dresses are missing – have been created by the same individual.

Charles Koroly’s career has however been far from linear. His life is as original as his costumes are creative: a novel by themselves. This American started off as a poor painter but had been noticed already at a young age. His talents took him to an art school in London and he eventually ended up in Sweden where he married. He learned scenography later on at the Dramatiska Institutet.

Koroly is a creator who gives all his might when he makes a costume – as if he himself was the actor putting on a show – I thought as I fascinated slowly moved about in this wardrobe’s labyrinth. It was the ideal time and place to wonder if it’s the man who makes the costume or the costume that makes the man? I read on the leaflets attached to each one about different theater plays and closing my eyes I could dream away towards farytales, castles and princes thanks to them… If that isn’t art then what is? 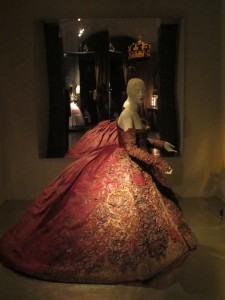 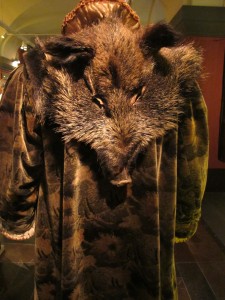 Shaken, I stepped out and walked up towards the real world again but not for long. As I walked into the museum’s permanent exhibition, I passed Jean Börlin’s (solo dancer and choreographer for the Swedish Ballet in Paris 1920-25)  colourful backgrounds.

The 60-year old choreographer and dancer Jiří Kyliáns’ dances with Nederlands Dans Theater was being shown on the movie screen. As an old dancer, it was difficult to sit still while wathcing such wonderful dancing. But I wouldn’t need to for too long.

As I left the dark room, I was met by African drum music and a Swedish dance teacher, Klara Berggren, who told me to take off my shoes. I wasn’t hard to convince and soon joined a mixed group of younger as well as older people trying to learn some traditional Guinean dance steps. 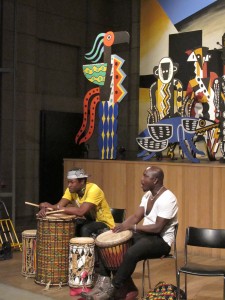 Mackan Sylla and Bayady Camara accompanied us with drums (djembe and doundoun). Soon enough we had forgotten our daily problems and were drawn into the happy tones of the drums and the dance steps.

So don’t forget to take along your dance shoes and a happy smile as you come and visit the dance museum in Stockholm!