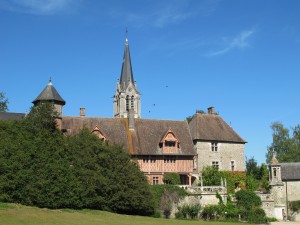 Already during the Middles Ages this spot was considered important enough to have a fort erected. I passed by it’s ruins on my way into the park. The castle was built during the 15th-century but has since gone through extensive renovations, the latest in the 19th century, to the actual new-gothic style. But I wasn’t interested in the castle nor in the small, genuine village with its covered market place and cristal clear riverbed. What’s exotic about this place is its grand park with animals from all over the world strolling around freely. It was during the -30s that the owner – from a wealthy French industry family – collected plants and animals, specially birds, after his exams at the Sorbonne University as a zoologist. 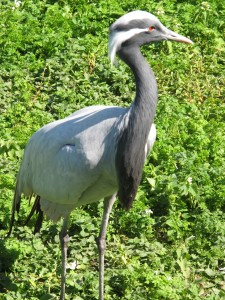 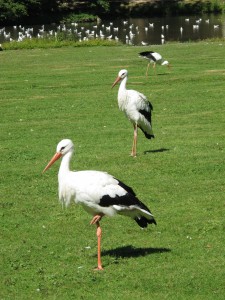 The park is built as a labyrinth with broad green spaces, ponds, bushes… everything to make the animals thrive.

I was handed a map and turned to the left at the entrance. A few steps further I was met by antilopes that weren’t frightened by visitors. Close by I spotted a magnificient black swan with a crimson red beak. Further away the Ibis birds that used to swam around the Nile peacefully went about next to the lovely Miss Crane (yes! That’s their name). Why travel to Senegal and venture out in a shallow canoe in a river full of crocodiles when I can see pelicans and pink flamingos so close to home? 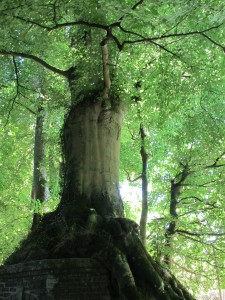 I raised my eyes to try to see how high these “mammoth trees” were, their giant roots like entangled pythons crushing everything in their way. Then I discovered a pair of ears peeping out behind its trunk. They belonged to a wallaby far from home! One of several of the different Australian kangaroo types. 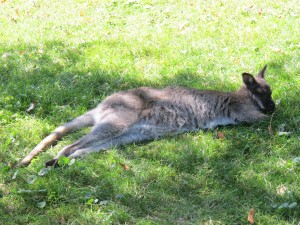 At the far end of the park I discovered parrots, an owl from Lapland, gibbons… before I exhausted sat down for a cool glass of cider at the castle’s terrasse. Normandie is known as the “apple region” and apple cider comes in several flavors, one more tasty than the other.

Dieppe is one of the region’s harbors along the Atlantic ocean. It’s a city in its own right more than a toursit place. I walked down to the harbor through the ancient part of the city – a car free zone – where the market was closing for the day. I passed by the myriad of fishes being sold for a cheap price rather than throwing them away, and I continued down towards the sea side. There among the fishing boats I sat down at a local restaurant to enjoy one of the local specialities “moules frites”, clams with french fries. 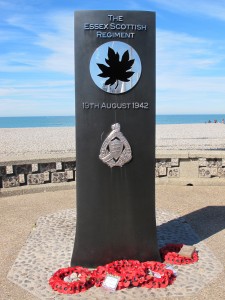 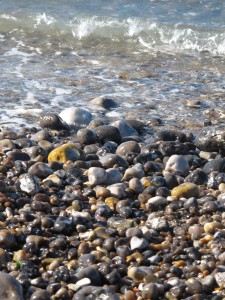 On the menu I noticed in addition to the usual ”moules marinières” (the classical recipe with white wine and oignons) several variables. One being with Neuchâtel cheese. The local cheese from the Middle Ages in the shape of a heart as a means for women of the time to declare their hidden love to English soldiers. Love over the borders! Cider and cream in the cooking is also appreciated here I understood. All recipies from Normandie swim in fresh cream. They served oysters too but I decided against them although we were in a month with the letter “r” (when you’re aloud to eat oysters according to the traditions) but it was a bit too hot to dare to taste that delicacy. The temperatures will fall soon enough to indulge in them in one of the numerous Parisian brasseries during the winter months without risking food poisoning. 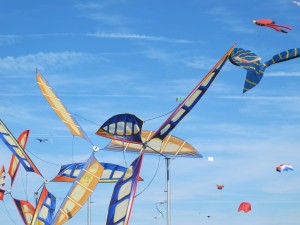 To digest I walked under a clear blue sky to the beach a bit further away. When I looked up the sky was covered in colourful kites in the shape of birds, octopuses, fishes, a bear… to mention a few. It was the yearly international kite festival, the most improtant kite competition in the world!

A kite dance took place above our heads accompanied by loud film music: different countries competed. The Japanes one had only one kite but was one of the most amazing I thought. It is believed that it was in today’s Indonesia that the kite was invented around 3500 years ago. In China it has existed for more than 2000 years. The Korean stand sold the most beautiful kites but although I was tempted I resisted as I thought of my Parisian life where kite-flying didn’t really fit in.

The kites made me think of Afghanistan and the excellent book “The Kite Runner” by Khaled Hosseini. If you haven’t read it yet, you still have to the chance to endulge in a novel you won’t be able to leave until you read it. 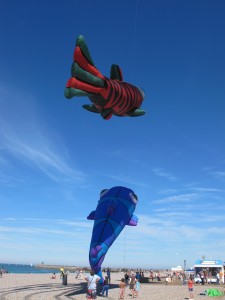 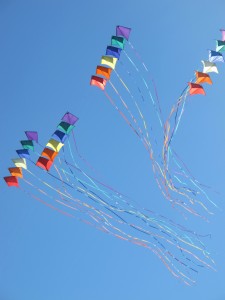 We swam in the Atlantic Ocean a bit further away: at Quiberville-sur-Mer. The sand was made of small, round stones bt it was calmer and there were less people on the beach. Otherwise my favorite village in the area is the romantic Veules-les-Roses worth the detour even in the middle of winter! On the way, don’t hesitate to stop at the Parc des Moutiers in Varengeville. The park and the mansion were built by Englishmen at the end of the 19th century. It’s in English style with trees, bushes and flowers imported from all over the world and planted on these hills stretching down to the sea side. Each season has its specialities so any time – except November – March – is a revelation.

Driving around this vast region, on a Harley Davidson, I understood the thrill of motorcycles for maybe the first time in my life. France has a miriad of smaller roads from where to make many more discoveries, explore or just enjoy the landscape. 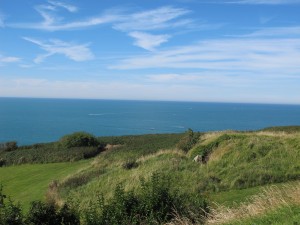