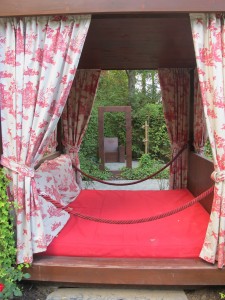 Chaumont-sur-Loire: From Paris I boarded the train to Amboise (with it’s beautiful castle and Leonard da Vinci’s last home both worth visiting) otherwise the TGV (fast train) goes directly to Tours – around 200 km South of the capital – in the middle of “Paradise Valley”. I was immediatly plunged into France’s grandeur with its numerous castles, parks, vineyards, goose-liver, fruits and vegetables coming in a myriad of colours. Is it in the same country that one talks about financial crises I wondered? Maybe we should measure GNP (gross national product) in GHP (gross happiness product) instead? Then this country with “natural” wealth in abundance, will surely be graded as one of the best in the world! 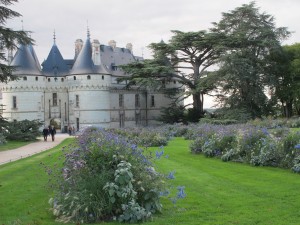 Chaumont-sur-Loire – classified as cultural heritage by UNESCO – in gothic and renaissance style (1400-1800) mirrors itself in the river Loire that flows by at its feet. The park with its centuries old cedar trees extends down to the riverbed. Under the tree-crowns, uncountable artists and philosophers have strolled: Nostradamus, Germaine de Staël, Benjamin Franklin to mention but a few. The park – in English style with it’s hills, paths surrounding large greeneries, trees and bushes – have seen yet another attraction since 1972. 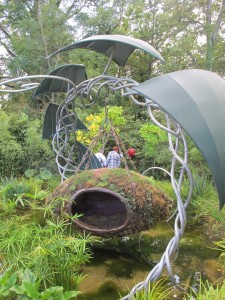 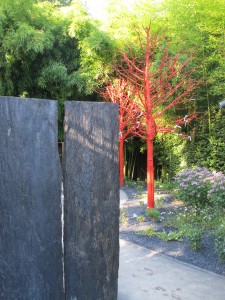 The theme of the year was “voluptuousness”(25 April – 21 October 2012). It offered fairy-tales, madness, courage, fanatsy, botanic extravagance, luxiorious greenery that surprised and spread joy, on the border of science fiction. Each creator had its own square – screened off by bushes – to freely create. I strolled through this fairy-labyrinth without knowing what would show up around the next corner. An Englishman had aligned a small army of garden-dwarfs each holding a rake with which they intended to do a “revolution”; a Swede had made the Sleeping Beauty garden; another had put up insects-looking swings… 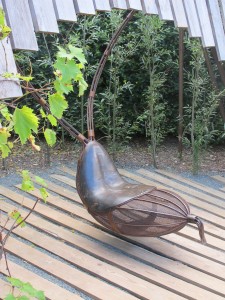 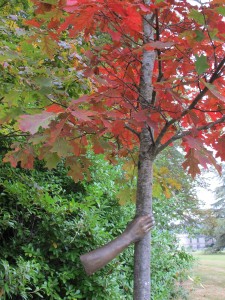 Further away in the rest of the park, I squeezed myself through a tree-installation, patted an arm made of bronze that held on to a tree, peeked through coloured glass-installations. I finished my visit far out on a landing-stage built by the Japanese Tadashi Kawamata from where I had a beautiful outlook on the Loire. 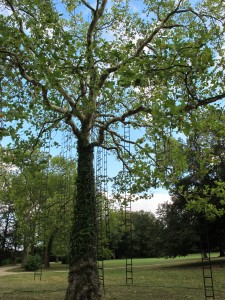 Villandry built around 1536 was one of the last renaissance-style castles constructed along the Loire. Its traditional garden was destroyed during the 19th century and turned into an English park. It wasn’t until the beginning of the 20th century that the gardens were restaured to their original shapes thanks to the owner, the Spaniard Carvallo. In 1924 he also founded an association of “historical habitats” (les Demeures Historiques), opening up for the first time in history to the public. 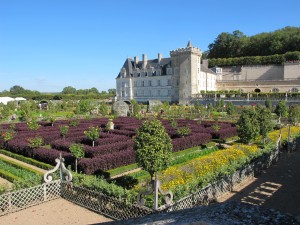 Several different gardens, water-falls and children areas have been integrated into the park. But my favorite was the former monks’ renaissance kitchen-garden. Nine similar squares but with different geometrical patterns, many resembling Jesus cross, all surrounded by well-broomed boxwood. Planted around vegetables in different colours (the blue leeks, the red sallads, the jade-green carrot leaves) to create the illusion of a colourful chess-board. The roses were also planted symetrically, symbolizing the monks digging their squares! 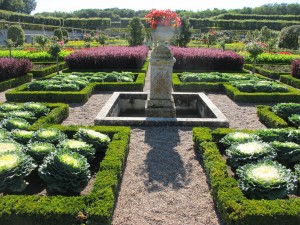 The other influence came from Italy and added ornaments to this monastical garden: fountains, bushes and flower-decorations. 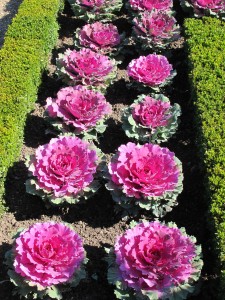 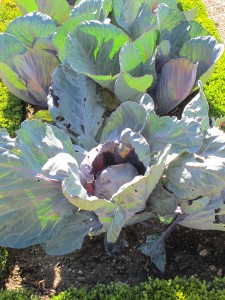 The French 16th century gardeners combined these two inspirations, the monastic and the Italian, to create the garden needed for the newly arrived roses and vegetables from America. They called these gardens “decorative kitchen-gardens”. 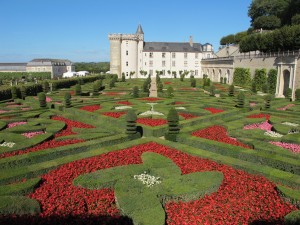 The “love gardens” were more romantic with names such as “aching love” – symbolized by bushes cut as hearts separated by small flames; “passionate love” – again hearts but separated by dansers; “flicking love” – symbolized by fans; “tragic love” – with red flowers arranged as to look like daggers. The gentleman next to me talked bitterly about the last one, apparently having been left by his wife… I decided to let him pester on without me and strolled over to the calmer and happier “sun garden”. 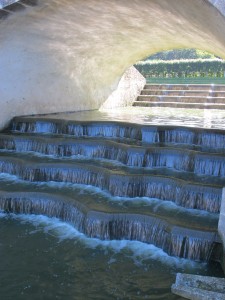 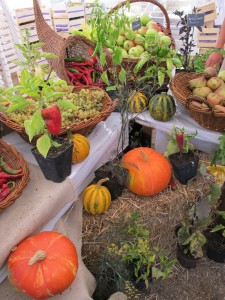 The sun was shining, the water in the small water-fall trickling quietly along and it was hard not to be taken by the beauty of the place, independently of any past memories.

The workers living quarters were situated not far away. They lived during the Middle Ages in caves – carved into the mountain’s soft tuff. I was shocked to discover how they lived after having admired the castle’s beauty and grandeur that took years to build. But apparently these workers were quite independent and sold stones – that had soaked for two years in the riverbed and then dried in the sun – for the construction. 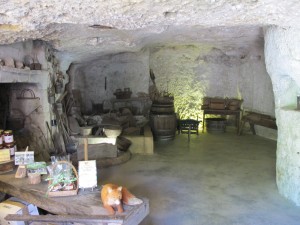 The family Chardon runs this troglodyte village that they themselves found, restaured and opened to the public about ten years ago. The farmers used to be self-sufficient with the forest supplying them with wood and game; a few hectares were enough to cultivate wine and cereals; the river supplied them with water and fish. Each farm had its own well. As the family expanded, one just needed to reach for the pickaxe and make some more room in the cave. There were hideouts too dug into the mountains where to hide when looters passed by. 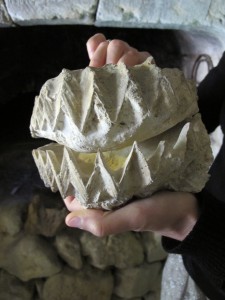 Each house had their own oven. These “houses” didn’t need warming in the winter nor cooling in the summer: they kept the same temperature of around 12-14 % C even if the humidity must have led to quite a few cases of rheumatism… After all, this used to be at the bottom of the sea as I discovered when the family showed me a gigantic, fossilized oyster!

I was served homebaked apple-cake and cider in the troglodyte café. I was happy that I lived today and could sit and enjoy the food and sunshine without having later on to go to bed in one of these caves! But for the nostalgics, there is a star-hotell nearby all in troglodyte style. Apparently it’s well frequented and often fully booked.

Well, this is but a glimpse into France’s “paradise”. Who knows you might even meet a real fairy in the woods? Come and discover it for yourselves, it’s worth the trip I promise. Long live GHP! 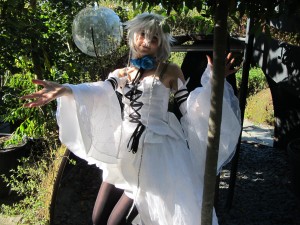