Aurélie Filippetti – the elegant French Minister of Culture – took her time to go around and visit most contemporary art stands at Grand Palais.

Jennifer Flay – FIAC’s Director – had seen to it that the level of the art shown during this 40th jubilee was good enough to compete with other international art fairs especially the very estimated Basel one. 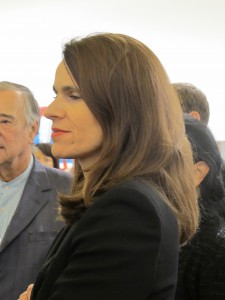 Thanks to a subtile equilibrium between national and international galleries, FIAC (Foire International de l’Art Contemporain) succeeds well in presenting a broad panorama of artists. 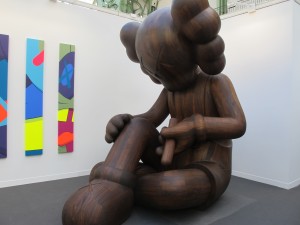 This year’s FIAC was more conservative than past years. The galleries were meticulously chosen and many artists were well-known and “safe cards” on the market. During these harsch times, maybe the organizers thought it best to bet on artists that people dare to invest their money into?

Jennifer Flay seemed to agree when she admitted that “this year we’ve been extra careful to chose those galleries that are strong on the international market, like Neugerriemschneider from Berlin, Fortes Vilaça from Brazil (along with 4 other brazilian galleries: a novelty!) and David Kordansky from Los Angeles but even newer galleries such as Vitamin Creative Space from China. Lets not forget that FIAC is more than anything else a place where to do business. In that respect Flay has done well: ten years ago, when she started her job, it wasn’t even certain that the fair could go on for another year. One of the art magazine’s titles stated at the time: “FIAC 30 years: birthday or burial?” This year’s title could have been “Contemporary art in Royal shape!” 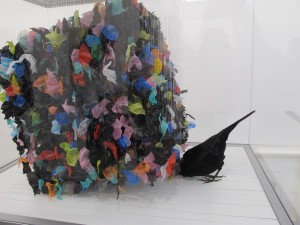 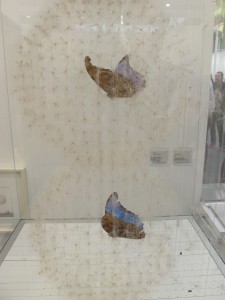 I think that art should mainly surprise, enlarge or explain societal problems, or just amuse and enrichen us. One of the most important aspect for the buyer must surely be that he doesn’t tire of it. Art works must stir something in you, talk to you, engage you… Few did I thought at this art fair with some exceptions such as the gigantic wooden Mickey Mouse statue called ”Better Knowing” by Kaws from the French gallery Perrotin and an American artist, David Datuna, who plays with glass and makes three-dimensional collages that were highly original. A newly opened parisian gallery, Schukin, showed him as their first artist. Several colourful sculptures by the Indian Anish Kapoor; Clair Morgan’s fine and intricate works with stuffed animals and Jaune Plensas gigantic head (that I also witnessed exhibited in Bordeaux) are all well worth mentioning.

The fair competes with the one in London, Fierze, that takes place just a week before. That FIAC is considered to be of a higher quality, as shown by all the British and American galleries that want to partake in it. Mollie Dent-Brocklehurst from London said that ”at FIAC we can concentrate more on the French and European markets while creating a bridge between Russia and the Middle East.”

The Germans were present this year with as many as 22 galleries. It was a German gallery that presented Ei Weiwei’s only sculpture. 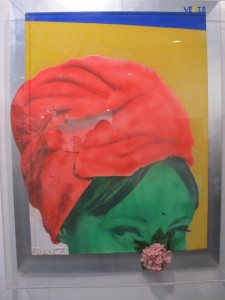 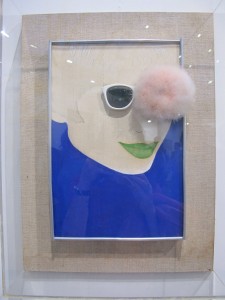 While the best galleries were on the ground floor, it was among the lesser known galleries on the upper floor, that I met the Minister of Culture who was also interested in viewing those art works.

One of this year’s novelties was the extension of FIAC to other parts of town. Parks, museums, along the Seine… there were all kinds of installations and sculptures for the Parisians to enjoy this unsually warm and sunny autumn. The art scene expands from year to year which is highly enjoyable. Many of these artworks carry messages such as the gigantic wooden hippopotamus carrying a (living) person on its back reading a newspaper as he cries and whistles to make us aware of the world’s pollution (Allora & Calzdilla). The by-passers who happen to lift their eyes towards some of the fashionable Place Vendôme’s facades will be surprised by the small huts made by the Japanese artist Tadashi Kawamatas that hang there like bird nests. 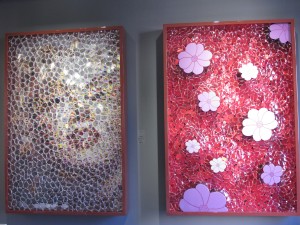 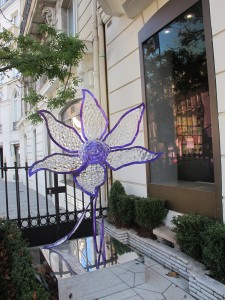 One thing is för certain: Paris is like an eternal party and the ongoing festivites at and surrounding FIAC are uplifting whether one has the means to invest in art works or not.