It’s difficult to imagine that there existed a time before Eurostar – the fast train that take the Parisians from door to door – under the canal – to London in 2 hours and 20 min. With the time difference one even gains an extra hour on the way over. Because of the rocketing housing prices in London, more and more Frenchmen have decided to commute daily. 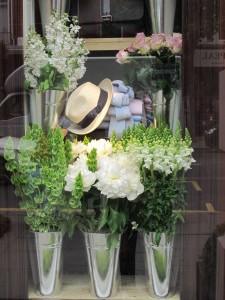 I was however going to London for a special event: to view one of the world’s best flower shows, i.e. the Royal Horticultural Society Chelsea Flower Show. It took place during five consecutive days (21 – 25 of May 2014) in the hospital park with the same name, as it indeed has since 1905. However the show started already in the beginning of the 19th century.

The Saatchi gallery – an innovative art gallery that showed an exhibition of different contemporary American artists – is situated just North of the flower show. Several shops had taken advantage of the show and had made fantastic flower decorations in their shop windows.

I was pulled into one with an enormous bird entirely made of fresh pink flowers and another one where the faces of the mannequins’ faces were decorated with flowers, an entire façade had been decorated with leaves and flowers…   Thus already before going to the show, I was exited by what I would experience there. But that was nothing compared to the incredible flower show I was about to see! 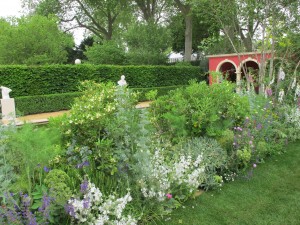 Outside of an enormous tent erected for the occasion in the middle of the field, gardens had been planted with trees, rocks and ponds with matching plants and flowers some accompanied by man-made paths or beautiful buildings/ruins. The best gardens displayed proudly their prices: from gold to bronze.

Artefacts, gardening tools, flowery umbrellas, handkerchiefs, jewellery… anything a plant-lover could possibly wish for was present. It’s also a gigantic market where the merchants hope for an extended clientele. Even sculptures were exhibited – especially remarkable were the exquisitely fabricated driftwood animals. 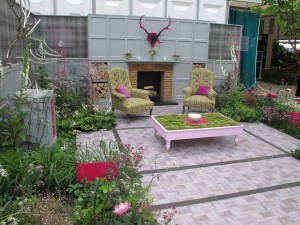 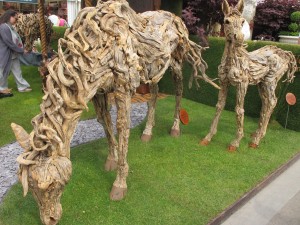 In the tent I discovered groups of flowers in an explosion of colours. The roses were displayed under ruin-looking arcades; there were more petunias, tulips, geraniums, orchids, cactuses… than I knew existed. 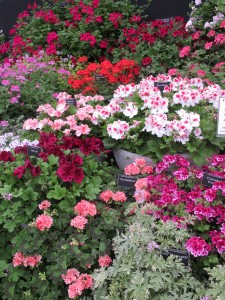 There were also stands representing certain countries like Thailand with elephants and gods all made of colourful flowers; South Africa with a fantastic image of Nelson Mandela fabricated with dried flowers in a palette of eight natural colours.

“A garden was one of the few things in prison that could be controlled. To plant a seed, watch it grow, take care of it and then harvest it that gave a simple but lasting sense of satisfaction. The feeling to be part of this parcel of earth offered us a small sense of freedom.” (Nelson Mandela).

In the afternoon, more and more people filled the premises and I felt that I had had my share. It hadn’t even rained despite threatening clouds. All my senses over-flooded with colours, wonderful scents, aesthetics, creativity… I happily continued my journey albeit with sore feet. 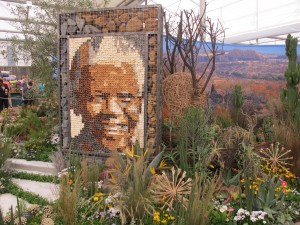 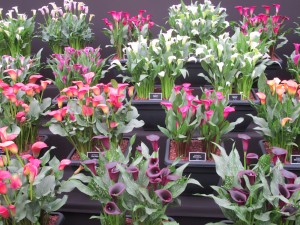 is one of my favourite museums in London. This time an exhibition by the famous designer and architect William Kent was displayed. Heavy golden furniture fitted well the grandiose castles for which they had been ordered.

William Kent (1685-1748) was the leading architect and designer of the early Georgian England. The exhibition is interesting from a historical point of view when England was quite a new nation after its union with Scotland (1707) and the introduction of the Hanoverian Royal family (1714).The exhibition is one in a row of events to celebrate the English/German royal alliance 300 years ago. 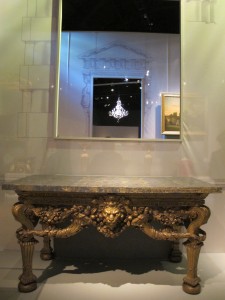 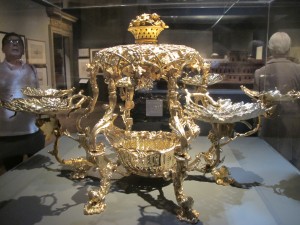 William Kent’s style – strongly influenced by his studies in Italy – continues to thrive in several English castles but also in normal homes. He was – on top of making architectural plans for castles and parks – a multi-facetted artisan and artist. Of the 200 exhibited works, there were drawings, paintings, sculptures, furniture, book illustrations, theatre- and costume- drawings.

Sharply contrasting to the Georgian style, was the Bartha Contemporary Gallery (www.barthacontemporary.com) – a gallery showing contemporary art in Central London (25 Margaret Street, London W1W), around the corner from the fashionable Oxford street. Family gallery is owned by a German/Swiss couple whose son has taken over and showed me their temporary exhibition with Stephan Baumkötter (born 1958). 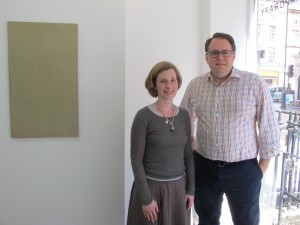 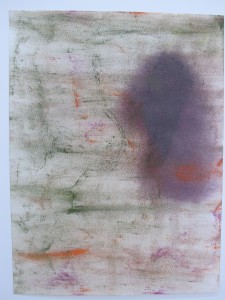 He’s one of Germany’s leading abstract artists working in Cologne and teaching art in Bremen. The paintings are exiting and have a depth – for despite that they first seem monochrome I soon discovered a broad palette of colours in them. His drawings’ enigmatic compositions create interesting relations with the oils.

Before my return to Paris, I even had the time to go to the new hip market, Spittafield, in East London. Every day, they have different markets. The day I was there it was vintage and antiquities. Young designers and handicraftsmen have gathered around the permanent market and you can – for an affordable price – purchase unique and hand-made clothes.

The fashion in London is much more crazy than the Parisian matching, conservative one. An air of madness enlightens ones spirit I discovered! So just let go and travel to London to get some new impressions. 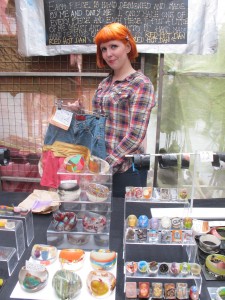