The great French pop-artist’s retrospective is currently shown in Paris with works from the 1960s until 2014. 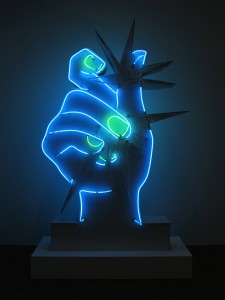 The visitor discovers a contemporary artist through more than 200 works of art – sculptures, paintings, drawings, photographs and films – in the new realists’ field. As soon as I entered the first of many of the exhibition’s large rooms, the bright colours, neon, and blinking sculptures that I met took me by surprise.

Daily objects such as powder boxes, plastic beach toys, lime-green nail polish, decorate realistic portraits are part of his installations. Martial Raysse (born in 1936) – entirely autodidact – uses those tools as presented in advertisement to ironize over the female archetype.

He was born on the French Riviera, in Nice, by parents who were ceramists. Already in the early 50s he became part of an avant-garde art group there. Inspired by Arman, Klein, Calder, Niki de Saint Phalle among others the Frenchman quickly made himself a name within pop-art.

”Les Prisunics sont les nouveaux musées d’art moderne” – i.e. the new modern museums are the Prisunic (cheap, common) shops. Instead of collecting objects found on the beach for example as did Picasso and many other artists, Raysse bought cheap, plastic, daily objects in bright colours – often related to the sea and beach life he lived close by – such as sun screen creams, bath rings, beach matrasses… he then used in his works.

A few years after his successful start in France, he moved to NYC and to Los Angeles (1963-68) where he continued his career as one of the youngest amongst the new-realists.

The 1968 French youth revolts however pulled him back to his homeland and he definitely left the USA.

Martial Raysse, despite his enormous success, then left the consumer society behind him and resumed to move from one hippie community to another, trying hallucination mushrooms as well as did some odd films while high on narcotics, using real actors and amateurs he dressed up in carnival clothes with animal heads, tails or furs. Even his paintings and drawings reminded me of mythologies or fairy tales with half-human half-animal figures. Nature, dreams, childhood with its naiveté became increasingly part of his works. His world seemed to be shimmered through fairies. The sculptures – many in papier-mâché – are funny and childish – far from his 60s large neon sculptures. 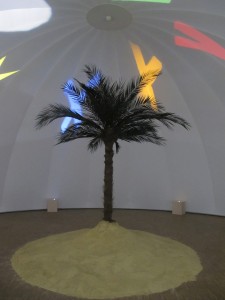 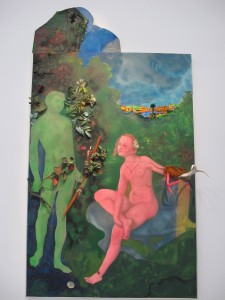 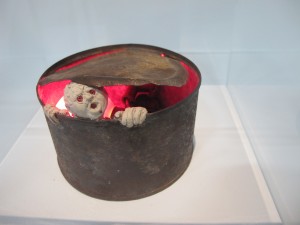 The last years he’s been painting in larger and larger formats – like enormous frescoes – with what he calls scenes of  “daily humanity”. A mixture of esoteric signs, daily- and beach-scenes – in a way a return to his early motives but in a different format and shape.  Despite his different styles, he has always been followed by collectors such as Pinault and a few faithful galleries, so he never had to feel the often hard necessities of life’s burdens like many of his fellow artist friends. I mostly liked his realistic, somewhat kitsch portraits however.

Come and decide for yourself – you have all summer until September 22, 2014. 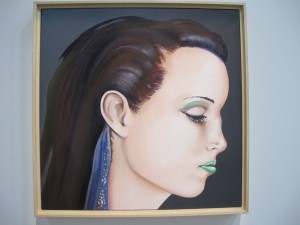 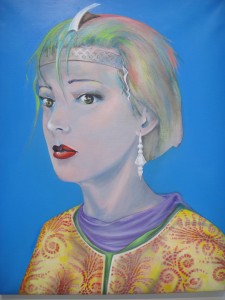 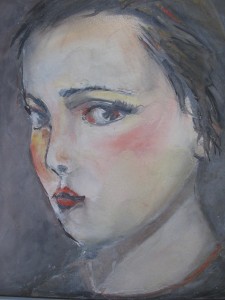