Säfstaholm Castle is situated in the heart of Sweden, not far from Stockholm, and shows yearly summer exhibitions. This hot summer of 2014, animals were the theme, which sounds innocent enough but is it really? 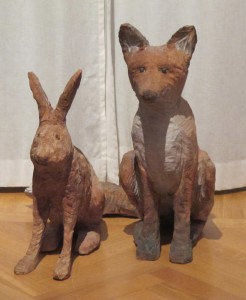 Anders Jansson, The Hare and the Fox.

The castle is surrounded by water and pleasant greenery, placed in a lush park with its own herb garden. In the large and cool castle rooms, Swedish artists had been invited to show their view of our four-legged friends through paintings, sculptures or photographs. The result was not only a feast for the eye but also an interesting perspective on humanity viewed from an unusual angle.

“When I don’t know what to paint, I paint an animal”, admitted the artist Torsten Renquist. Looking at the wide range of animals, I wondered if it wasn’t the artists themselves who had escaped into the animal world…

Some looked really human, some appeared sad, some happy, some were metaphors for human behaviours, such as the one by Folke Linde (Mutation II). His painting depicted a cow without head but with two sets of mammals – a satire over the use of animals in large cooperatives and the earth’s over-exploitation. Or the long wooden sculpture of a fish with large teeth made by Sam Westerholm who ironizes over wealthy people’s greed.

Animals have throughout humanity served as symbols and been used by artists from the times of the Pharaohs, Lascaux cave paintings, the American Indian tipis, the Vikings’ stone engravings, the still life works of arts, to the many faery tales and sagas…

In different religions, mythologies and ceremonies animals have been worshipped. Birds for example have often symbolized “soul wanderings”.  The owl has played an especially important role, representing both wisdom and judiciousness as well as magic and spirituality. The beautiful owl photographed by Brutus Östling shows signs of human traits. For animals have always depicted human characteristics and feelings as shown in expressions such as “proud like a peacock” or “stubborn as a mule” or “strong as an ox”… 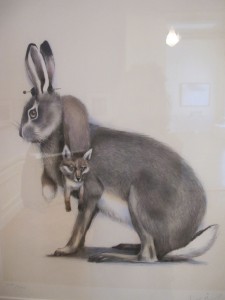 In our essentially agrarian country, animals and nature continue to play predominant roles. We often find them in our names such as Björn (Bear), Fågel- (Bird), Kvist- (Branch), Berg- (Mountain), Sten-(Stone), Sjö- (Lake).

Famous classical Swedish artists like Gunnar Brusewitz or Bruno Liljefors (the last name being a combination of a name of a flower and a river…) are represented in this superb exhibition, as are more contemporary ones. Lasse Åberg’s painting “The hare with the fox” is a satire about humanity’s cruelty; Ernst Billgren’s “Duck landing by mistake on a pike” mosaic-sculpture is a blink to make us think out of the box; while Anders Jansson is a bit kinder by gently placing the usual enemies: the hare and the fox – side by side. Maybe there is hope after all, I thought viewing them sitting there, for former enemies – such as Palestinians and Israelis – to come to terms and live peacefully side by side? Can a victim turn into a bully and can a victim and a bully forgive each other or is it themselves that they have to forgive or rather their acts before they can forgive the other?

Some 19th century nature-lovers though turned into fanatics and nationalists, giving me the shivers, thinking about the rise of extremes in our times. The Swedish National party (SD) has risen to frightfully high levels. With the Swedish national elections already in September, it’s worrisome indeed. In the animal world however there aren’t any boundaries or customs of course. Except for my cat – Katja – who even got her own passport traveling from Paris to Stockholm! Her cat-friend, the Egyptian goddess Bastet, would have frowned (or whatever cats do…) at such an absurdity! 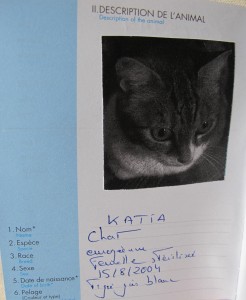 I let the animal-lover Albert Schweitzer conclude with these words: “It’s man’s love of animals that makes him human”. 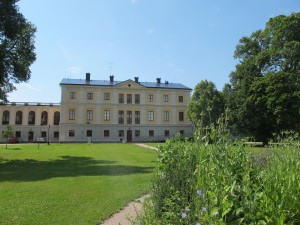