The autumn in Paris started with music. Fatma Saïd – an Egyptian young promising soprano-singer – and the pianist Matthias Veit – took their Parisian audience by storm. 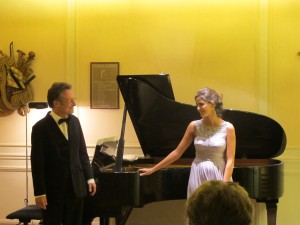 Villecroze music academy had arranged the evening’s concert in honour of the late Finnish musician Tom Krause. The academy – situated in a beautiful ancient village in Southern France – encourages and supports young musicians since 1989. They also organize master classes and concerts like this one.

This young woman’s transformation on stage was quite spectacular: from a normal girl her age (23 years old), she twinkled like a star, with a voice as clear as crystal but as strong as that of a fully-fledged soprano’s despite her tiny features. Her mimics went from comic to tragic, from sorrow to happiness and from flirtatious to profound love with an incredible ease, as if she had already experienced all those emotions despite her young age.

Then Fatma is also one out of ten young persons world-wide to have gotten a scholarship to study song at the world’s prestigious music academy: La Scala in Milan.

“I have been taught discipline since childhood at the German school in Cairo,” she told me. And discipline is indeed needed to have the courage to train the voice for hours on end.

Nobody in her family is either a musician or a singer so they were quite astonished at Fatma’s choice but when they understood that she was really serious about her future profession they stood up for her. The young girl was trained by a professional Egyptian teacher and then sent to Eisler Hanns’ music school in Berlin.

Fatma has already performed in numerous concerts around the world, before this one. 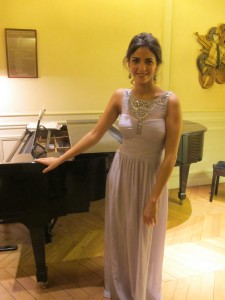 In honour of Tom Krause:

This was but one of several concerts given around the world to honour the famous operatic bass-baritone who recently passed away (1934-2013).

He had been both Fatma’s and Matthia’s beloved teacher. There was no doubt in the mind of the audience, this warm September evening, that his teachings had born fruit – wonderful fruit with both aroma and sweet taste. These two artists proved that they mastered a broad palette of differing genres of music from classics like Schumann to cabaret-songs via beautifully performed Egyptian poems.

So don’t forget this name: Fatma Saïd because I’m certain that she’ll make it to the top sooner rather than later and will become one of the world’s most famous singers.