To find out I went to see the excellent movie Citizenfour. It’s the documentary about Edward Snowden’s divulgation of classified documents. The film doesn’t only give us an over-view of the magnitude of the global system of surveillance that we’re all subjected to but it also led me to wonder about other cases. Such as the one that Sweden is implicated with the Julian Assange affair. 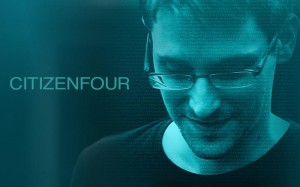 A whistle-blower…is a normal citizen who has discovered that things aren’t quite as they should be and leak these discoveries to the media. Edward Snowden had a profound insight into the American security system despite his young age (29 years old at the time of the filming in 2013). Through his work as a computer expert at the NSA (National Security Agency) he got access to secret information. He discovered that with the help of complex surveillance systems (such as PRISM) and via among others underwater cables, the USA and Great Britain spy on ordinary citizens and government officials internationally. George Orwell’s novel “1984” is reality! Big brother sees you. Google, Facebook, Hotmail, Amazon, You-tube are all linked to this global surveillance-system. Our private lives have been erased without us even protesting against it. A few courageous persons such as Edward Snowden and Julian Assange have warned us.  Newspapers such as the Guardian and Washington Post have published some of the “secret” documents handed over to them by the whistle-blowers. What has come out of it? What is the result? Has the surveillance-system been stopped?

The role of Sweden:

The current Swedish government is all too happy to have shown their electors that “we are listening to you and as you were against our arms deal with Saudi Arabia, we stopped it”. As the actual foreign policy has a “feministic approach” it was indeed difficult to keep up doing business with a country obviously in opposition to the official Swedish foreign policy. Humanism or politics? Or clumsiness? The reader will have to decide. However what does that have to do with the Snowden case? Could it be that the Swedish government by appeasing their public want to hide or make us forget another much worse case? Because according to secret documents that Snowden leaked about Sweden – going under the code-name SARDINE – is the USA and Great Britain’s foremost partner in the surveillance business. The Swedish FRA (Swedish NSA) apparently spy on the Internet traffic under the North Sea via underwater cables and then presumably hand over the information to USA and Great Britain. Added to that, Sweden’s roll after the leak was quite controversial. The EU demanded to discuss the surveillance system with the USA but Sweden as the only EU-country together with Great Britain put in their veto and thus blocked those discussions.

Under such circumstances, it’s not surprising that Julian Assange doesn’t dare to come to Sweden for his lawsuit out of fear of being handed over to the USA. Another question one might ponder over is why the Swedish prosecutor consistently has refused to come to London to question him – an otherwise normal procedure?

Sweden’s roll isn’t discussed in this excellent documentary about the whistle-blower Edward Snowden but the film – a true thriller – makes us aware that there is a lot going on behind the scenes that none of us know anything about. It makes me wonder about our so-called democracies. Can we at all call us democracies when we spy on everybody and list normal demonstrators – such as the ones in Occupy Wall Street – that are since surveyed, as if they were criminals? Thinking about how easy it is to spy on Swedes with our personal number following us everywhere and in every instance, it gives me the shivers.

Already in the 60s, President Eisenhower, in a famous speech, warned about the fact that “soon we politicians won’t be running the show anymore, it will be the mighty arm’s industry.” He didn’t know how right he would be.

So what can a regular citizen do? We can all become whistle-blowers and keep our eyes opened by not being so naïve. We might also become a little more inquisitive about our own governments and the decisions that they take. And stop being so self-righteous.