The retrospective exhibition at the Museum Galliéra, in Paris, show some of this fashion icon’s most sumptuous creations. It’s a dive into another era, a time when fashion was a way of living. Fashion à la Jeanne Lanvin is creativity as its best. 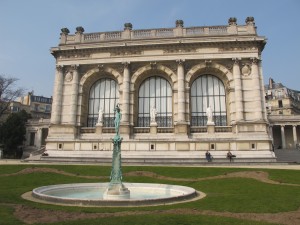 Jeanne Lanvin (1867 – 1946) started working as a dressmaker only 16 years old. In 1889 she opened her first boutique “Lanvin Modes” and a few years later, the fashion house moved to the fashionable address, rue du Faubourg Saint Honoré. She married an Italian nobleman and they got one daughter, Marguerite, Jeanne’s only child and her muse. The clothes she made for her were so much appreciated amongst her mundane clientele that she started a children’s collection. It was soon followed by a wedding- a lingerie- and a fur-collection. In the beginning of the 1920s, she started an interior design and sports’ collection as well. In 1926, she opened boutiques all around France and extended the collections with men’s clothes. At least one thousand professional seamstresses were yearly employed to create clothes for Jeanne Lanvin.

However, her most important brake-through came with the creation of her perfume Arpège. It was produced to celebrate her daughter’s 30 year’s birthday. The roundish perfume-bottle’s logo showing Mrs Lanvin together with Marguerite – designed by Paul Iribe – hasn’t changed since.

Jeanne Lanvin was inspired by travel-books, ethnical cloths and art books to create the fantastic creations the visitor gets an insight into through this well-sorted exhibition. 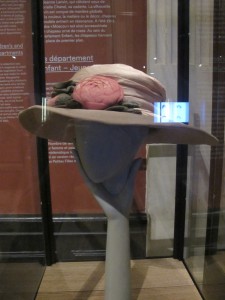 One of Jeanne Lanvin’s hats

Visitors go from admiring the most intricate black and white clothes to the ones made in Lanvin’s favourite colour: blue. A loved child has many nicknames and the same went for Lanvin’s blue: lavender blue, royal blue, electric blue, night blue, lazuli, indigo… She made blue belts, hats, dresses and coats. Even her invitation cards and her wrappings were blue. You are invited to see some of those at the exhibition as well as several drawings and a few documentaries.

During Paris great 1925th industrial and decorative-fair some fashion houses were also invited to participate. Jeanne Lanvin showed intricately decorated creations with precious stones and jewels, using gold- and silver-threads. The embroideries were mostly ethnically inspired from Asia or the Middle East. Sometimes cloths that Lanvin had found during her several exotic trips. The exhibition at Galliéra ends with beautifully embroidered wedding-dresses and evening-dresses. 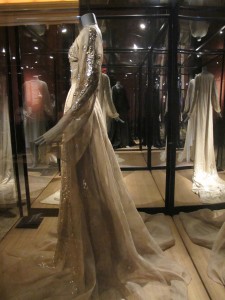 Thanks to modistes in the traces of Jeanne Lanvin’s aftermath and her Haute Couture many handicrafts continue to thrive in France. In most other countries these specialists have disappeared together with the increase of consumerism and low-costs clothes. It’s therefore a feast to see these unique and beautiful creations. Let’s party and make our lives a party!