The Pope Francis held his third Papal speech in Rome in front of tens of thousand pilgrims who, for some, had travelled from far away. They stood silently in the pouring rain, listening to him. His speech was a cry of help for Oriental Christians, massacred by Islamist fundamentalists. What is the world doing to assist them, he wondered? 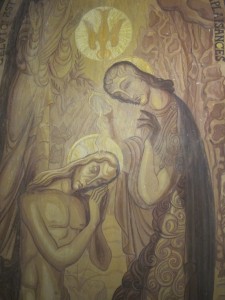 Those were recurrent words in this largely appreciated Papal speech. He showed once again that he stands on the side of the oppressed, vulnerable and poor. However everybody – especially the Vatican’s most conservative members – don’t appreciate the new Pope’s change of power structures.

His speech was a cry for help for the oppressed with a special regard for the Oriental Christians: “Love, light and life has overcome the darkness. Through his death and resurrection, Jesus showed us the way that implies humbleness and vulnerability. Only the ones who have suffered can rise again. To live in respect of each other implies strength and not cowardice. Violence isn’t necessary and we ask for forgiveness for the people who exercise violence on others.” 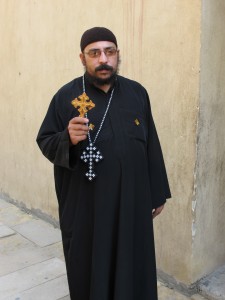 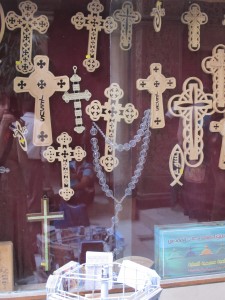 A priest in the Coptic area of Cairo

A call for peace:

The Pope asked for peace and reminded the public to pray for the world’s conflicting areas such as Syria and Iraq –where he has tried to travel to – for which the Pope asked the UN to promptly act to stop the atrocities. He talked about the refugees trying to flee to Lampedusa where many migrants’ boats have been engulfed by the ruff seas and showed his support. “I’m really upset by the fact that such things can happen in our modern world,” he said.

In his speech he also talked about the need for new peace talks between Palestinians and Israelis. He prayed for peace in Libya so that the “barbarian violence there can come to an end.” In Yemen he hoped for a joint solution. He didn’t forget to mention Iran either. He prayed for peace in Nigeria, Southern Sudan, Congo, Ukraine and for the students who died at the University in Kenya not long ago. He didn’t omit to mention the slaves, the sick, the victims of mafia gangs. His main message was that “those who carry God within them don’t have to use force.” I’d like to add that the world would be so much more peaceful if we didn’t fight so much in the name of God… 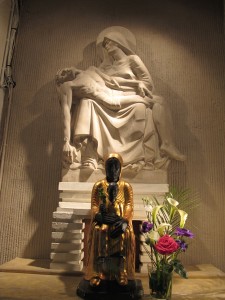 Who is the Pope?

It’s a man filled with courage and humility. The courage to stand up against the Catholic conservatives and the humility to stand up for the weak in society. He has shown this disposition time after time. By refusing to socialize with only the elite and rather partaking in sharing his food with the poor and taking the time to visit the sick and old, he gives another image of his post than we’re used to seeing. “The Church needs to get over its narcissism and revaluate its position.” The Pope refuses to be isolated in his ivory-tower. He wants to move around, meet people and learn without being dogmatic or self-sufficient. When he came back to Argentina, he even dared to stand up against the well-established mafia.

Above all, he seeks to reform the Church from within, By regularly reuniting cardinals from several countries he wants to create a “world Church” where eternal peace can prevail. Together with nine cardinals they discuss current affairs monthly for three days. Pope Francis is present during the entire conference and seeks through discussions to reach a consensus even if he has the last word. There are vast differences between one church/country to another. “It’s essential to be able to talk openly, without judgment, only then can harmony be created.” The idea is to consolidate what’s best for everybody. According to the Pope, the Holy Spirit unifies us. One could also call it the life energy.

The Pope believes in the strength of the prayer. After his trip to Jerusalem, Abbas and Peres asked him for a common prayer. “I opened my home for them,” he said. Despite the Israeli attack in Gaza soon afterwards, the Pope is hopeful: “prayers give results… the only thing that counts is peace and tolerance. A door opened up. Now we must wait until the world follows suit.”

With all the violence that we are daily confronted with, it’s important to have a strong faith. The Pope isn’t the only one to have that, as was shown during the Orthodox Easter during which many Oriental Churches were full. Such as Saint-Saman, a Cathedral carved out of the mountain in one of the poorer areas in Northern Cairo. Let’s join them and pray for a peaceful and just world.

Anne Edelstam, Paris. More about the Copts in Three Ladies in Cairo (Amazon.com and Kindle) 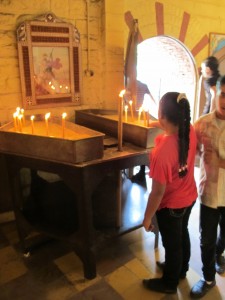