Sweden’s prestigious artist from last century is finally being exhibited in one of the world’s hippest cultural capitals. 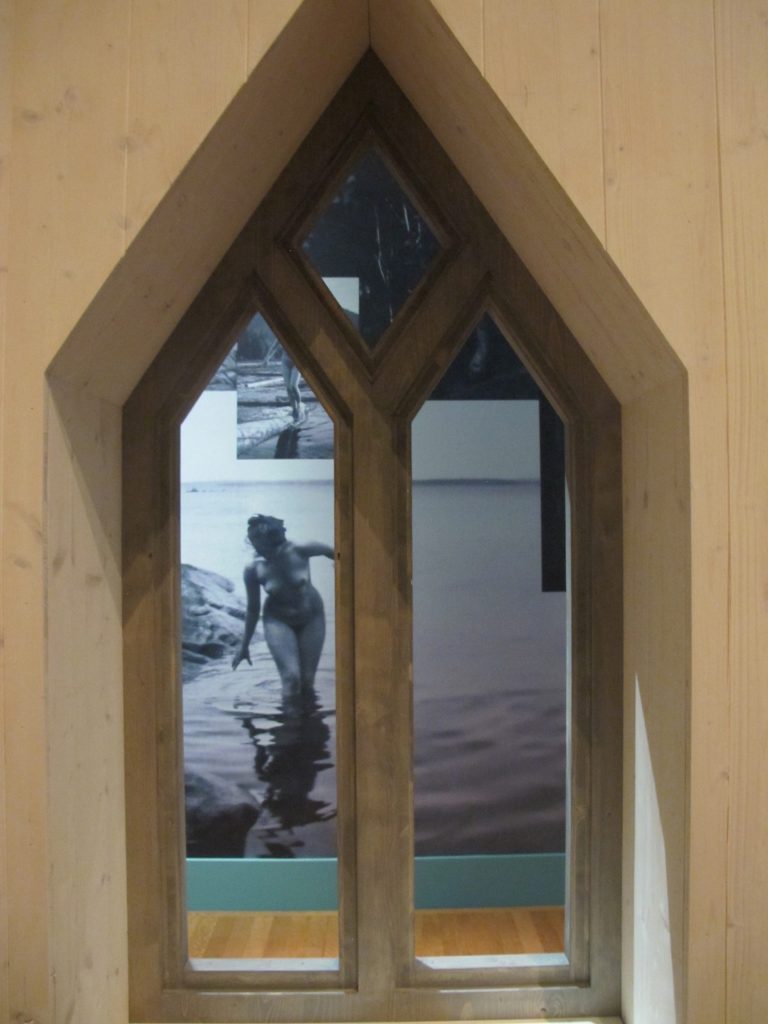 Anders Zorn’s photograph seen through a setting at Petit Palais

With all its antique palaces and sights, Paris remains a meeting place for culturally interested people. However, until now, Swedish artists have been sadly unrepresented there. These hidden treasures have been rediscovered thanks to Christophe Leribault, Petit Palais enthusiastic and curious young director. Parisians first discovered the works of Carl Larsson, in 2014. “I do not know how the public reaction will be towards this, for them, mostly unknown foreign artist. It’s a risky game that I’ve played”, he told me then. French cultural personalities lifted their eyebrows at the sight of Carl Larsson’s many paintings of daily life. They weren’t used to such “homely” themes but times have changed and the Parisians took the Swedish artist to their hearts. 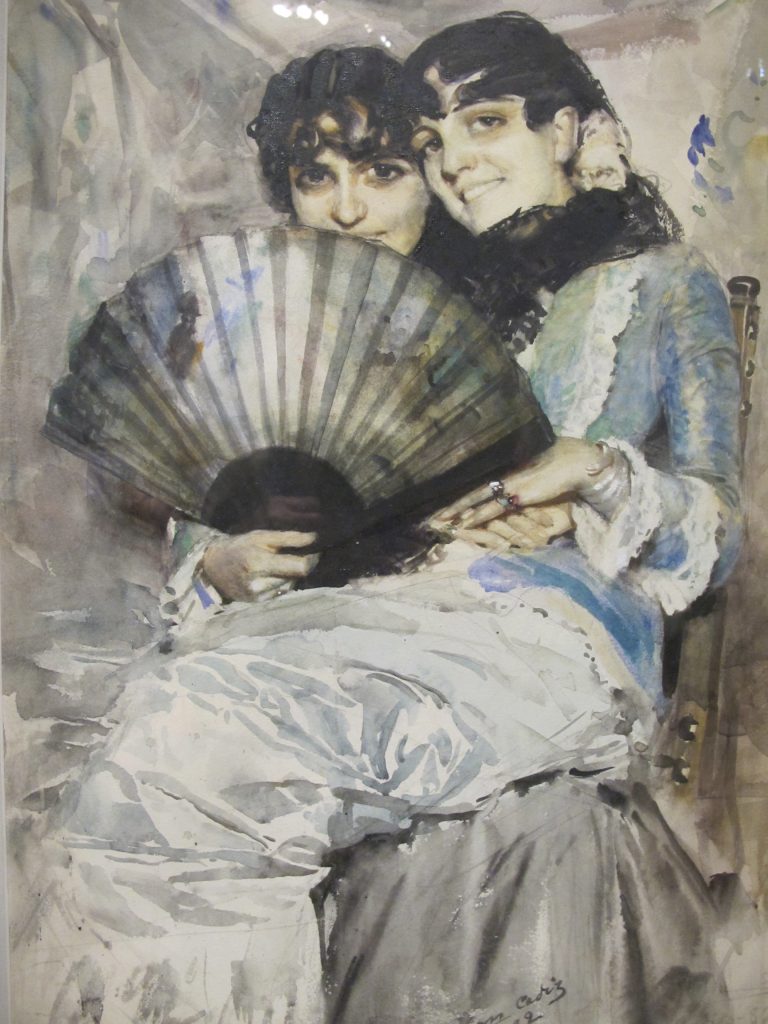 Anders Zorn (1860-1920) represents a different genre. The exhibition at Petit Palais, in Paris, is grander than the one by his Swedish predecessor, and the scenography even more studied and well thought. Johan Cederlund, from Mora Museum, the former Zorn house, has been the major provider of Zorn’s works of art. Magnus Olausson, from Stockholm National Museum, has also contributed to this exhibition by lending some pieces, as the National Museum is currently closed for renovation until it’s reopening in the fall of 2018. 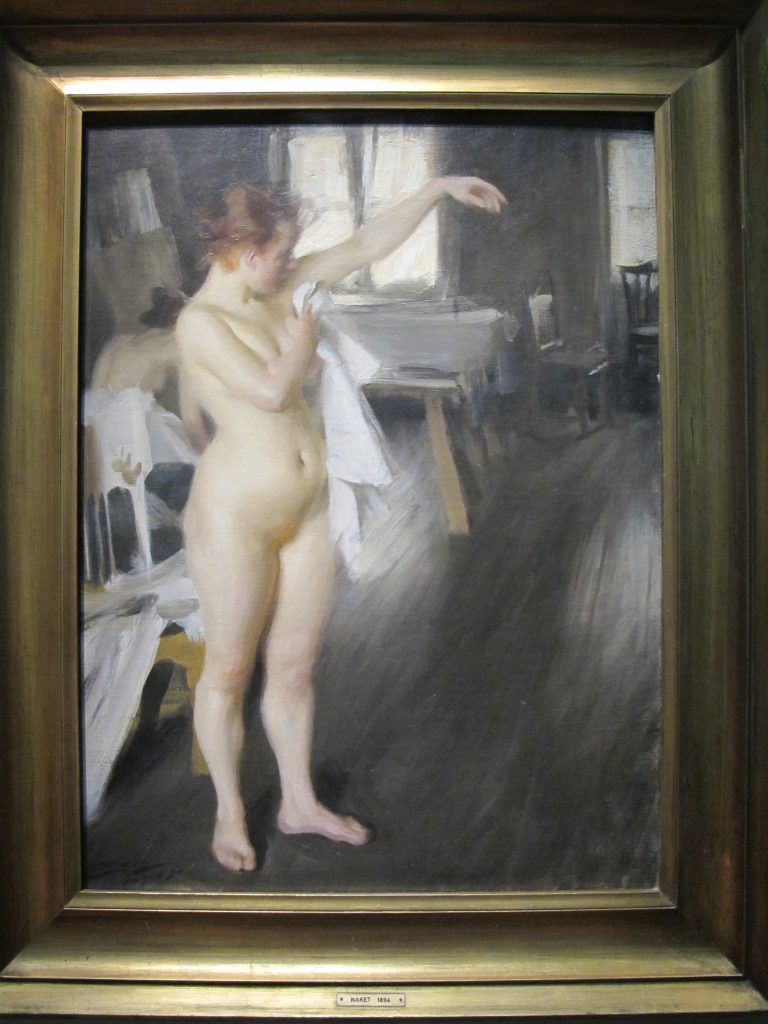 Zorn’s nudes often depict scenes from his home: here one of his sisters morning toilette

Despite that Anders Zorn was both admired and famous during his years living in Paris, his art hasn’t been shown here since 1906! Close to 150 of his works are exhibited during the autumn and winter 2017, until January 7, 2018. The Frenchmen discover what an extraordinary water-colourist, oil-painter in impressionistic style with bold brush strokes and etching master the man was. He’s compared to artists such as Sargent, Sorolla, Boldini and Besnard. 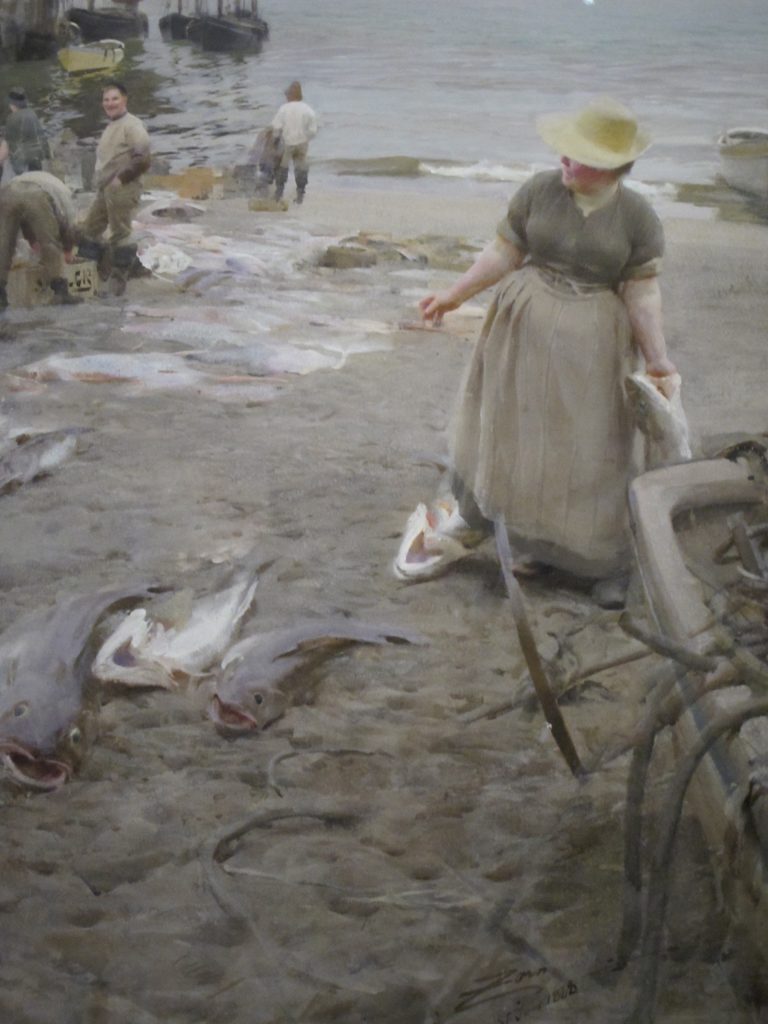 My re-connection with Zorn, after having visited the exquisite Zorn-Museum in Mora several times, was at another Swedish Museum: Sven-Harrys in Stockholm. It was also a different exhibition: Another Zorn, with oils, watercolours, etchings and sculptures that aren’t often shown. Several among which were landscapes from his travels all around the world. The visitors also had the pleasure of discovering the photographer Zorn. This virtuous owned at an early age a camera and he used it assiduously his entire life. He was one of the first artists to use pictures to create. These, together with his sketches, served as a base for his topics. 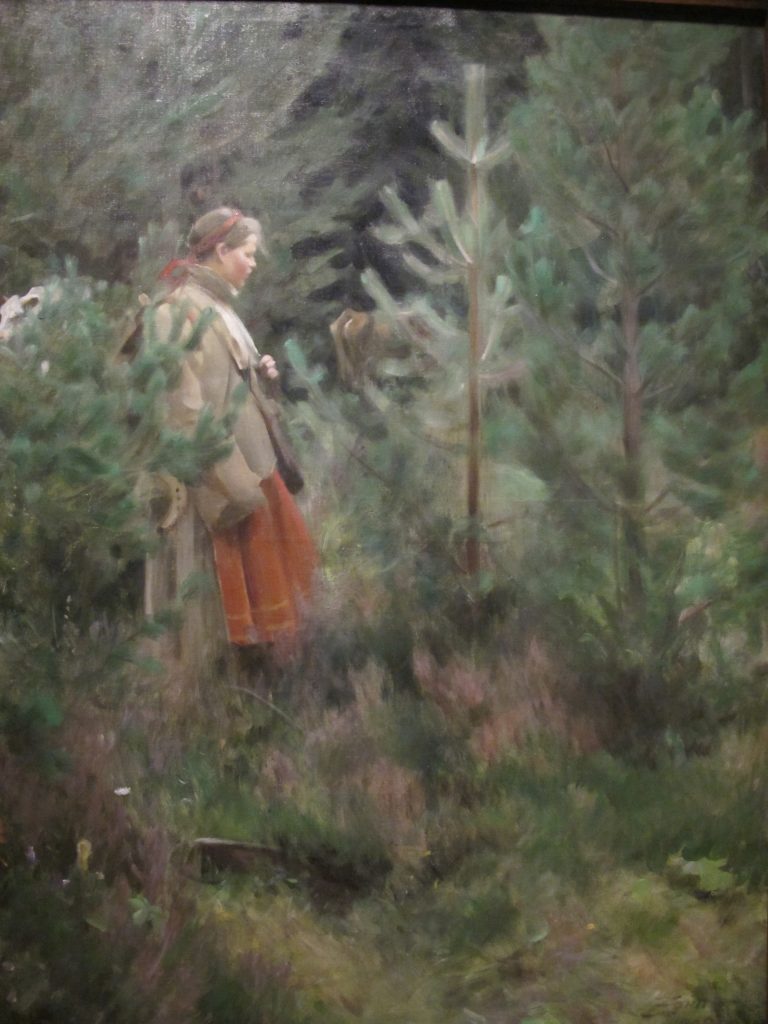 A woman in the woods, oil

The Parisian exhibition starts off with pictures showing the artist in his home environment. Otherwise the rest of the retrospective has been organized in chronological and thematic order. It starts with Zorn’s early works from Sweden, Spain and London; the next room takes the visitor to Istanbul with his exquisite watercolours; in a large red-painted room, some of the works that he created during his nearly ten-years in Paris, where he arrived in 1888, are exhibited; followed by a room filled with large portraits; and then the visitor is taken into a dark, round room where the artist’s engravings have been rounded up. The exhibition finishes with his famous nudes. It’s thus a complete retrospective of one of Sweden’s most celebrated artists. 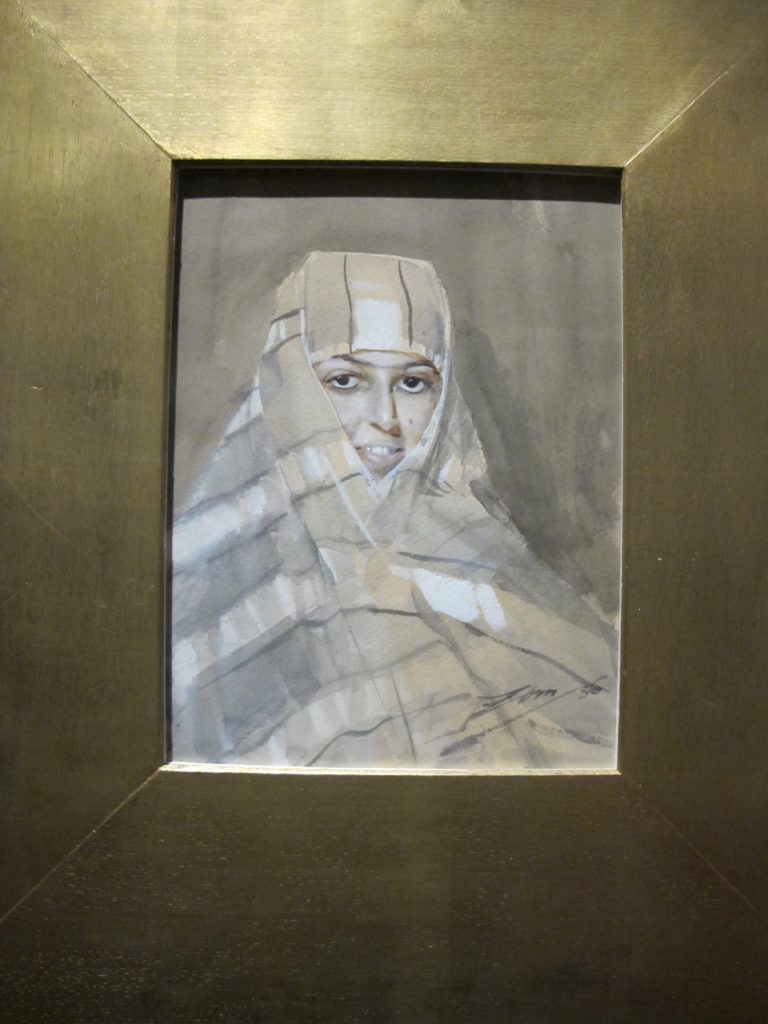 From his trip to Istanbul, a bedouin girl, water-colour.

Anders Zorn: the man behind the art:

The story of Zorn resembles a saga or the American dream come true. Zorn grew up in a poor environment, with a lone-mother, Grudd Anna Andersdotter, from Mora. His father was the German beer merchant Leonard Zorn. The boy’s talents were discovered at a young age and already at the age of fifteen, he was sent to the Stockholm Art-School, Konstakademin where he stayed for a few years (1875-81). Then he decided to continue his studies abroad. He had by then met the woman that would become his wife, Emma Lamm, from a wealthy Jewish family. However at the time he was forbidden to marry her. “First you’ll have to make an earning!” decided her father. 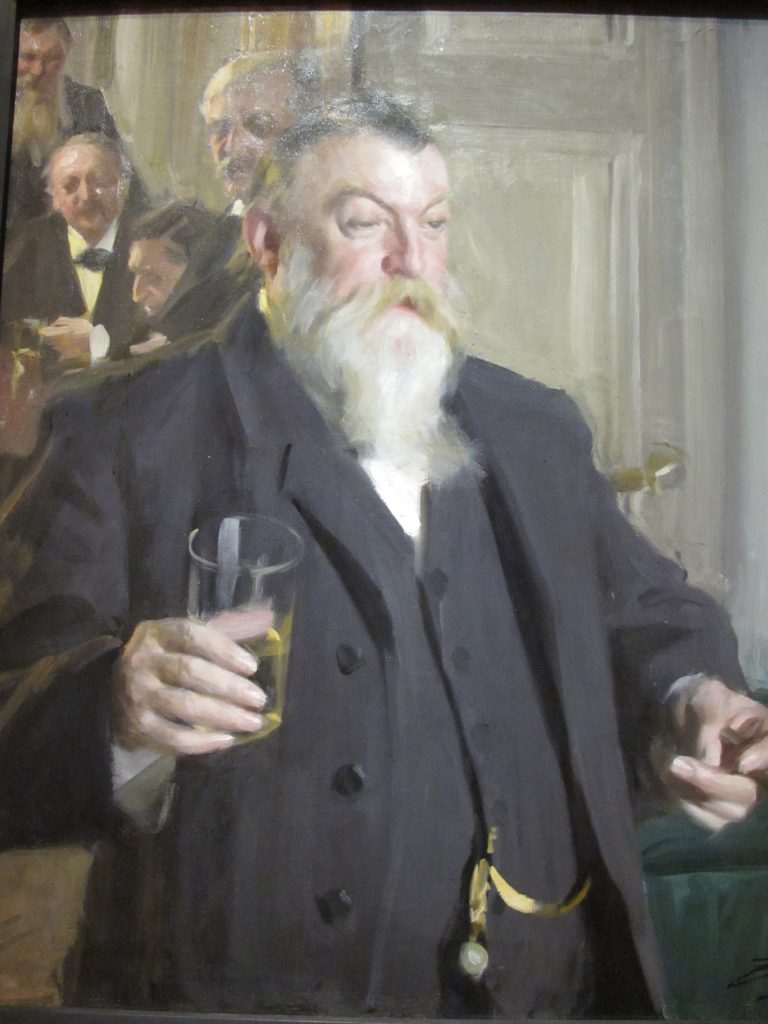 One of his many oil-portraits

The studies took him to Spain “here it’s warm and sunny with lots of sweet girls and picturesque beggars. A paradise for a painter”, wrote Zorn. His eagerness and talent took him to London where he stayed for at least four years and where he became famous as a portraitist. When he had managed to amass some money, he returned home and asked for Emma’s hand. Lamm’s family ties helped the artist to get introduced into a bourgeois milieu where he could thrive as a portraitist. 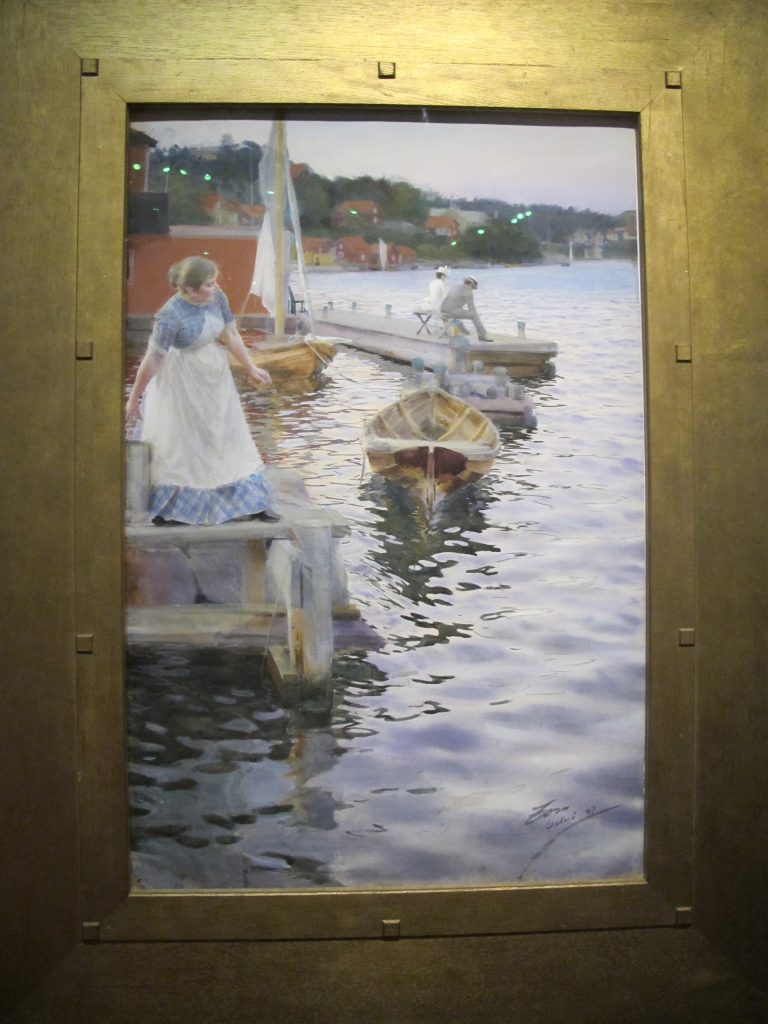 Zorn was famous for his depiction of water, here in aquarelle

Zorn made his name as an aquarellist. His watercolour “Grief”, shown at the Stockholm Academy in 1880, was immediately noticed and earned him a prize. The artist paints his watercolours in large formats – with water depictions as his speciality – waters from Constatinopel, Alger, Hamburg, Venice… but his aquarelle portraits are equally beautiful. He learned to paint in oil later on in his career and used similar bold brush-strokes as for his aquarelles. Zorn was also a master in using light, influenced by Rembrandt. 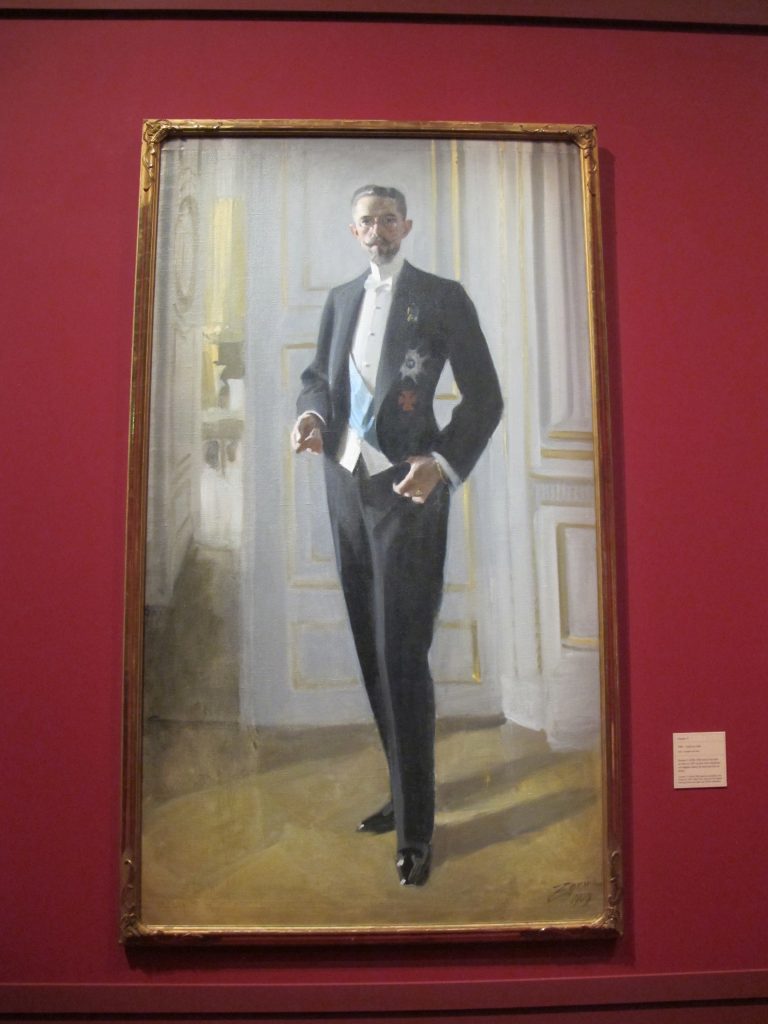 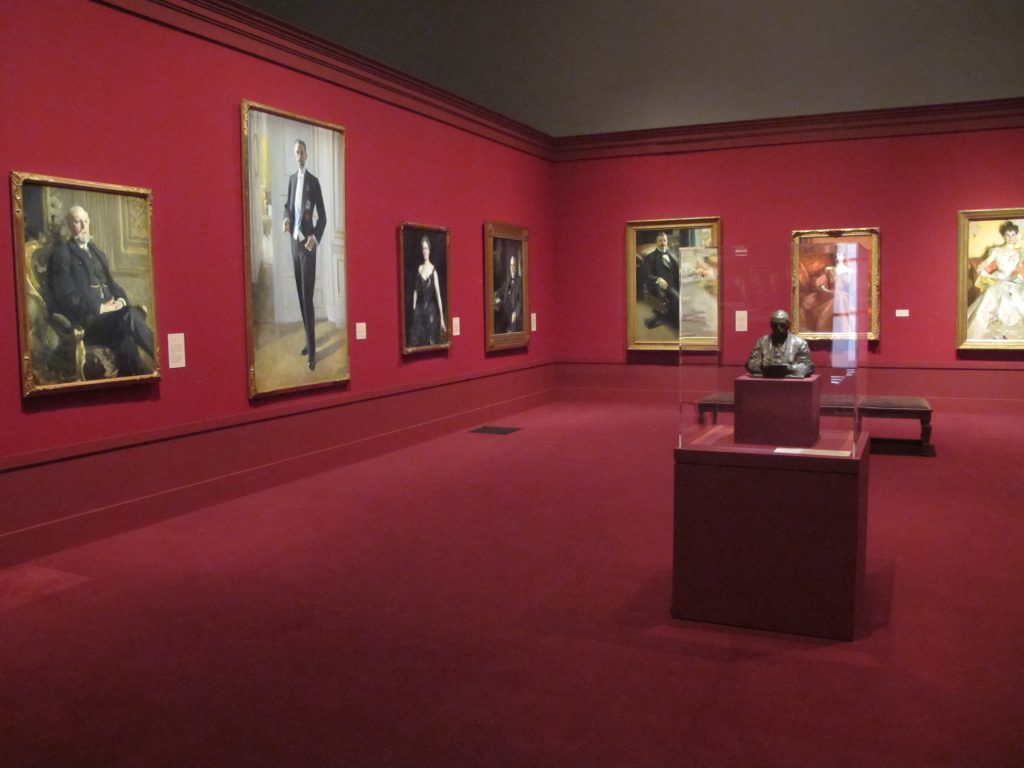 He continued in the same vein painting portraits of bourgeois Americans. He travelled several times to the USA between 1893-1911. Some of these exquisite paintings are shown at the Paris exhibition. 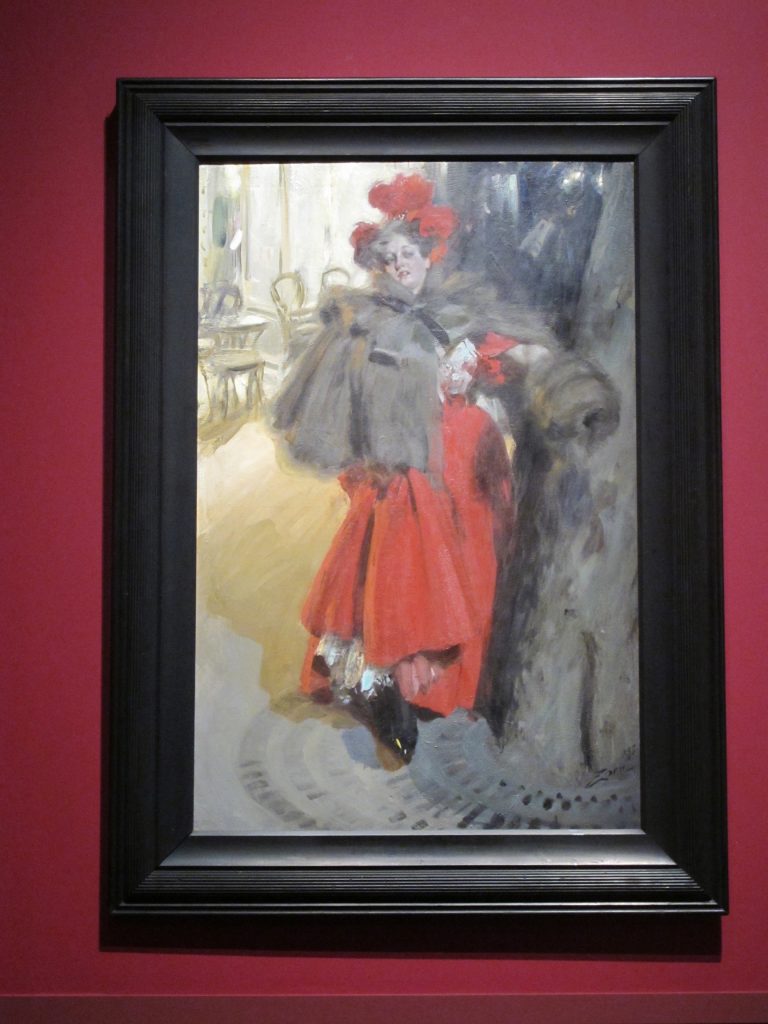 Portrait of a Parisian who had one glass too many…

In total his portraits amounted to some 550 works. His wealth grew and by 1896, the Zorn-estate was more or less finished and Anders and Emma could establish themselves in their home – that’s actually the Zorn Museum. 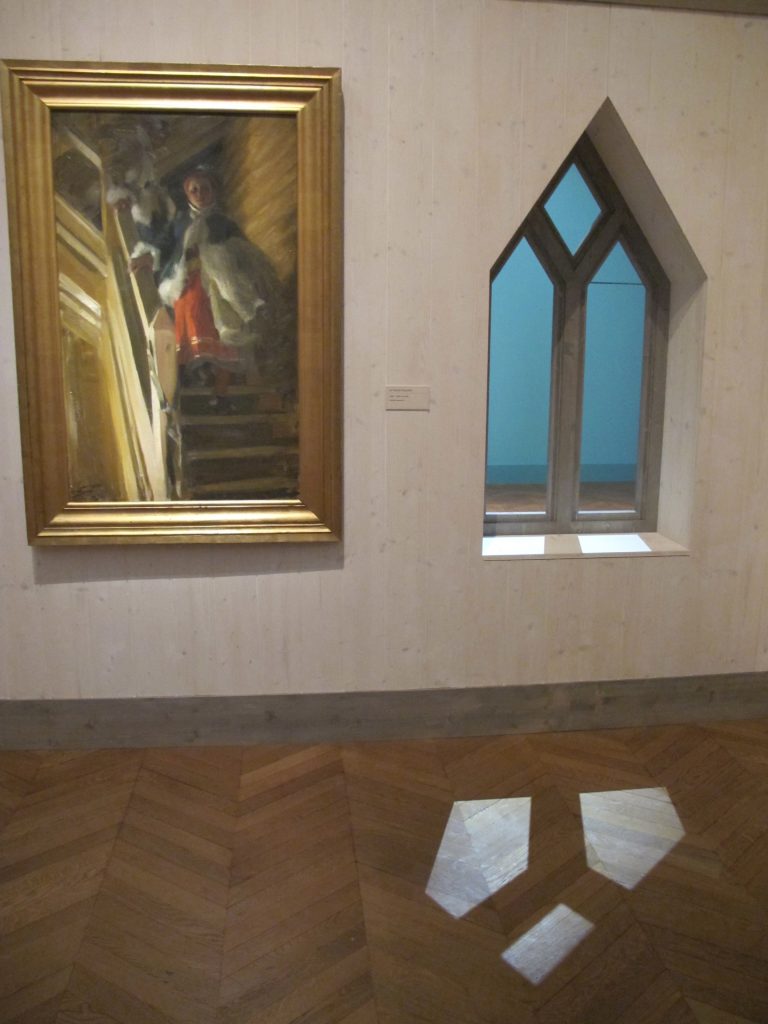 A window look-alike at Petit Palais, as the artist’s home in Sweden

He also made around 290 engravings, some of which evolved into paintings. The artist even made some sculptures, a few of which are exhibited in Paris. 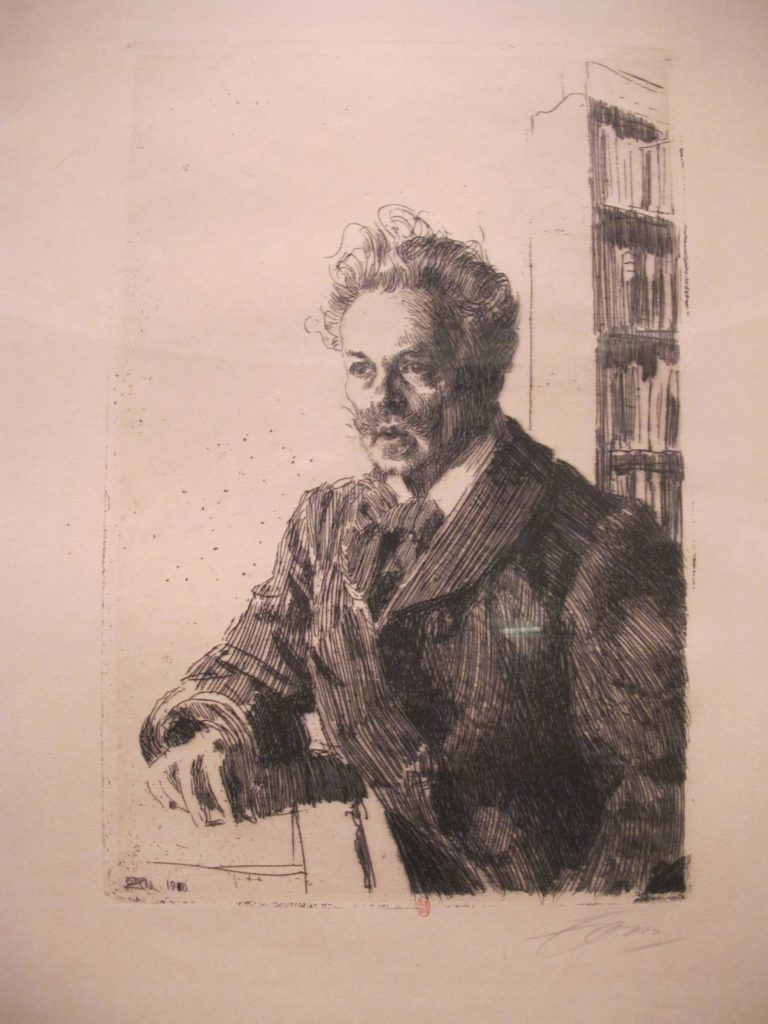 An engraving of August Strindberg, one of Sweden’s most well-known authors.

Don’t miss this unique Paris exhibition! And do come to Sweden to discover his homeland and the Zorn-home in Dalarna. 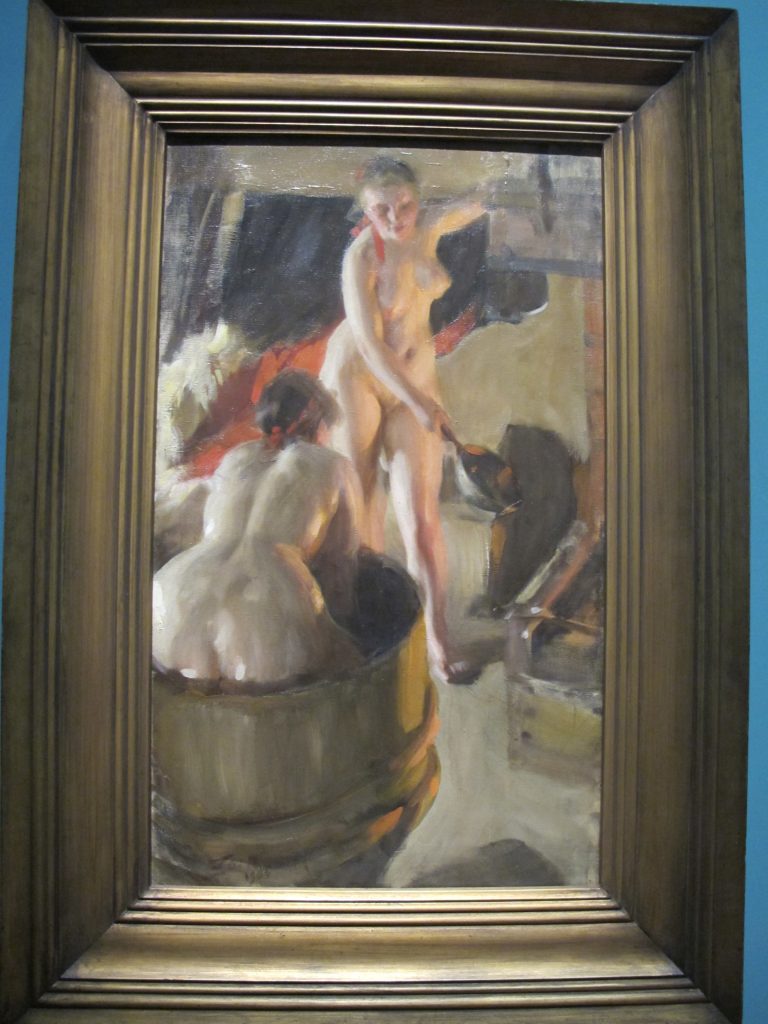