In Stockholm this summer, 13 indigenous grandmothers called for an international meeting. This colourful international council of elderly women from different countries and tribes see as their duty to pray for the earth and for coming generations. Grandmother Flor de Mayo:

The participants of this conference in the Clarion hotel in the centre of the Swedish capital, stood out amongst the businessmen buzzing around the elegant lobby.

Memories from hippie-times with flower power, long hair, flat sandals, foot-long skirts and dangling colourful and cheap jewellery, came flashing back as I observed the participants… However my smile soon turned into respect when I met and interviewed one of the grandmothers: Flor de Mayo originally from the Maya tribe. This warm and sturdy woman living and married in New York City was anything but flimsy. When I asked her about the meaning of this gathering she explained that “we need to pray for humanity – praying is a dialogue between you and the Creator – as currently humans, animals and the earth itself suffer from increasing pollution and devastation. There is an imbalance between the masculine and the feminine forces. It’s time now for women to take over as warriors of love and peace according to the Mayan calendar.” 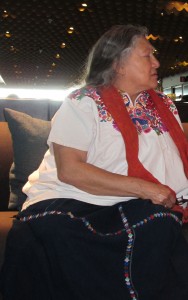 – “Your program is divided into the earth’s four elements. Today is the day of “water” what does that mean? I asked her.

– “We’re mostly made out of water so it’s an important element not just for the earth but for us humans as well. Despite that water is sold as a commodity and polluted… that has to end! We’re here to remind people of the sacred and essential right to free and clean water even for future generations.”

A woman entirely dressed in white presented herself as Jyoti. She is the Council’s “Ambassador” and organises conferences around the globe. She’s also the Spiritual Director of a centre of “Sacred studies” situated in California (where else…?). “Over 70 centres with wise grandmothers have been created around the world,” she said. “It just happened, we didn’t have an agenda to start with. We can now count on 1000 years of women wisdom if we add our respective ages.” These shamans were called “witches” not long ago and burned… Times have luckily changed!

The interview was cut short by a collective prayer around a fireplace in front of the hotel (!). Grandmother Mona Polacca – a Hopi Indian – held the ceremony and together with drums and chants prayed for clean water and peace. They held three similar prayers per day around a fire. The one I assisted, reminded me of an old Western movie with humming, stamping, drumming Indians clad in exotic clothes somewhat out of place in this modern part of Stockholm.

Water – the source of life:

Then the conference continued in a full audience hall in the hotel. I sat down next to a woman with long hair, sandals and no watch. I noticed that there were very few men in the large room. Two women talked at length about the pollution and other problems with water resources in Sweden. They saw mainly three obstacles to clean water: the military who is exercising above a large lake and water source – Vättern – and throwing used ammunition into the water; mining close by and gas-extractions with its consequences for the environment.

One grandmother stood up and told a stunned audience about her tribe’s reservation in Arizona where the Missouri river has been so contaminated by uranium that they can’t drink the water or even fish there any more. Even the dear that the Indians used to hunt has died because of the pollution.

A Dakota-grandmother, from “Turtle County”, in the heart of Canada was desperate because nuclear waste has been dumped in their reservation and nobody knew what to do with it. Somebody suggested that they should ask scientists to deal with the problem.

The grandmothers finally decided that the audience should sing a prayer-song for the preservation of water. What else could they do? 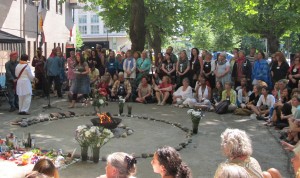 The Lapps were well represented during this conference and distributed brochures and leaflets about their specificities. I learned that since times immemorial Lapps have been roaming around Northern Scandinavia in an area called Sápmi (Lapland). Currently only 2500 – of the 20 000 Lapps living in Sweden – live solely from herding reindeers. Most speak Sami, they have their own Constitution and flag. However they have been segregated and persecuted for many years and have been forcefully moved away from their homelands even if since the 19th century, they have acquired certain rights. It wasn’t until 1977 that the Swedish government established their status as an indigenous population.

Åsa Simma gave us a glimpse of the Lapps’ current conditions. This well-established ethnologist, wanted to see her own people’s drums at the ethnographic museum in Stockholm. She presented herself as a cultural worker and a Lapp but was told off by the museum’s director. She decided to try another way and said over the phone that she was a German anthropologist instead; she was then more than welcome… “Before our people can be healed, the wounds have to be reopened,” she said. Apparently there is still a long way to go.

A Lapp that is certainly making her voice heard is the widely popular singer Sofia Yannok who just came out with her new CD called Áhpi that I can recommend (http://www.youtube.com/watch?v=tU-np8zS4HQ). She explains that her family had been forced to move, was forbidden to speak its own language and how systematically her people have been used by large State-owned Swedish companies such as LKAB and Vattenfall. Even the schoolchildren are taught more about the segregation against the blacks in the USA than about our own indigenous people! Sweden hasn’t ratified the Convention for the Rights of Indigenous People.

Unfortunately the entire conference was somewhat obscured by the “hippie-audience” that gave it an aura of happy-go-lucky. That’s a pity because the questions are serious and important. We need more than prayers to turn the world around. When are politicians and scientists going to listen to the grandmothers?