Through Peggy Kelsey’s well researched and complete book ”Gathering Strength – conversations with Afghan women” (Pomgranate Grove Press, 2012) our preconceived images drop one after the other and the reader discovers a new and exciting world. 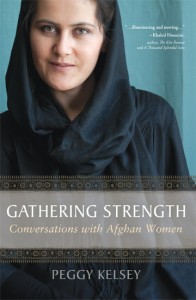 Peggy Kelsey is a professional photographer and the founder of the ”The Afghan Women’s Project”. She went to Afghanistan in 2003 and in 2010 and photographed and interviewed women with different backgrounds, age, ethnicity and interests. Her pictures are shown worldwide.

Afghanistan has a very ancient culture with two different languages spoken: Dari and Pashtu written in Arabic (with a few additional letters). However the Afghans aren’t Arabs, but of Arian (Indian) origins. The country is situated between the West and the East and has successively been invaded by different people from Persians to Greeks, Mongols, Turks, Russians…

Zoroaster introduced monotheism into Afghanistan in 628 B.C. A few centuries later, Buddhism was introduced (as shown by the famous Bamyan statues that the Talibans blew up some years ago); the country didn’t become entirely Muslim until the 12th century.

We also learn from Peggy’s excellent book, that the well-known “burkas” most of us have seen the Afghan women clad into came in fact from India, imported by Mongols in the 18th century. However one didn’t see so many of those in the 1950s and -60s when most Afghan city girls were dressed in short skirts their hair hanging loose… Men and women conversed freely then and spent their free time in cafés or in one of the several cinemas (Afghanistan had a famous film-industry). Some women that Peggy interviewed remembered well that golden age.

During the cold war, the USSR and the USA competed about the Afghan favours by constructing roads, electricity, tunnels, dams and other infrastructures. Russia became more and more influential in the country and after the Soviet-backed coup in 1973, the occupation was a fact. It lasted until 1989 with more than 2 million Afghans killed and thousands taken prisoners.

Chaos and power changes succeeded each other until the Talibans “freed” the country, “True” Islam was introduced, after years of forced atheism, with all that it implies of oppressions of women, beards, closed schools, puritanical ways…

In 2001 (after the 9/11 attacks in the USA) the USA started to drive out the Talibans and enforced the USA-friendly President Hamid Karzai. But corruption has become an increasing problem, as has the return of the Taliban ideology. According to the latest news the Parliament risk to enforce a law forbidding women to report violence (even the so-called honour crimes and rapes) happening within the family. It’s about time that we support these women and their struggle for survival and for their rights.

Thanks to Peggy’s book, my idea about Afghan women changed completely from being one of a common idea of a group of “oppressed women” to one of happiness and amazement to discover artists, film directors, photographers, writers, poets, atheists, believers, doctors, businesswomen… all with their different stories, tragedies and moments of joy.

Peggy has made the task easy for her readers by categorizing her interviewers into themes. But what most of these women – some recurring, some only once – had in common were their passions, focus, independence, sometimes even with the implicit help of the men in their immediate environment (fathers, husbands etc.) despite a conservative society. I’ll let the reader have the pleasure to discover Tajwar, Ghotai, Rahela ….

At the end of the book, the author reveals the principal questions she got doing her investigations. How was she dressed? Was it easy to find interviewers? How can the Afghan women best be helped? Those and many more answers are suggested.

This is a book that anybody interested in Afghanistan or in gender questions or in general in Human Rights should get and read in detail! I promise that many preconceived ideas will be altered and that we have a lot to learn from each other. 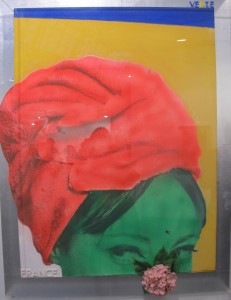