This winter, at IMA (Institut du Monde Arabe), in Paris, the two thousand year old Middle Eastern Christian history is being shown. Hundreds of objects, manuscripts, sculptures and photographs from Syria, Lebanon, Jordan, Egypt, Iraq and Palestine remind us where Christianity started long before spreading to the West. 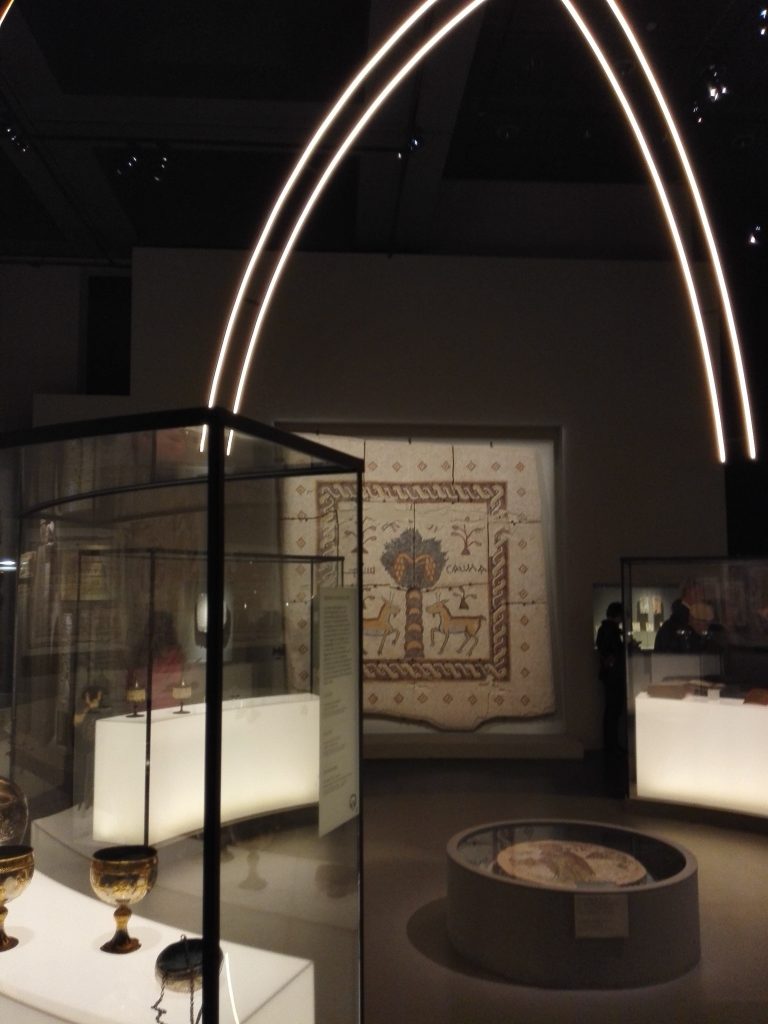 This cultural institute, IMA, was inaugurated by former President Mitterand, in 1987, and is a foundation. Each autumn a new exhibition is installed; the institute also holds a couple of restaurants, a library and a bookstore. A local branch even opened in 2016, in Tourcoing, in Northern France. It was Jean Nouvel and Architecture-Studio who created the spectacular steal building in Paris that represents the meeting between Arabic and Western culture. Jack Lang, former Minister of Culture, is its actual director.

This year’s exhibition, with over 300 objects, mirrors the Christian development since the beginning of times. Christianity was born in this part of the world around 2000 years ago. They then split into different churches and communities displaying their historical and geographical specificities.

The mise en scene respects the chronological retrospective; after an introduction with six exceptional works of art from different countries in one and the same showcase, the first room is low in ceiling and dark, like it used to be when the early Christians had to preach, hiding in private houses to avoid persecution.

Christianity then spread all around the Mediterranean countries during the two first centuries A.D. but was especially active in Syria and Egypt, before extending to Persia (Iraq and Iran) and Turkey. 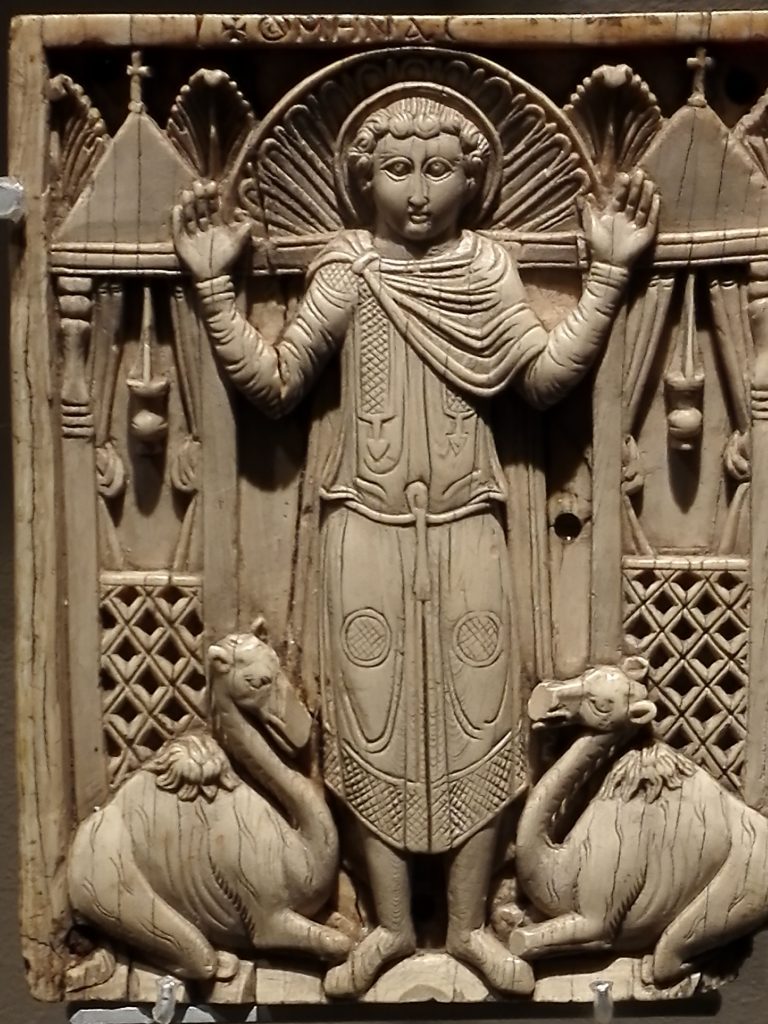 The Christian language and the Churches:

The evangelisation took place in Aramaic, the language of Christ, or in Greek, the most spoken language in the Roman Empire, depending on where the apostles were preaching. The Gospel was first translated into Greek and, during the 3rd century A.D., into other languages, as well among which, Coptic in Egypt (that’s still used by some local priests).

Emperor Constantine, decided, in 313, to favour Christianity before the other religious beliefs in the Roman Empire and, in 380, Christianity became the official State religion. Churches were built and Jerusalem, where Jesus is believed to have been crucified and resurrected after death, became its nave, with the Holy Grave’s Church that is still a pilgrimage for believers.

Already from the 5th century A.D., there occurred schisms between differing congregations. As a result, several Oriental Churches proclaimed their independence: the Persian Church; the Coptic (in Egypt); the Syrian; the Armenian and the Ethiopian. In the meantime, monastic life had taken form in Egypt. Saint Antonius (died 365) lived as a hermit in the Egyptian desert and was followed by others who became known as the “Desert Fathers”. Another hermit, Saint Pachomius (died 348), was called to create a monastery. Two beautiful icons from this time are exhibited.

One of the most well-known, still operating, monasteries in Egypt is Ste Catherine, where the burning bush is supposed to be. From there the visitor can also besiege Mount Moses.

From Egypt the monastic life spread to Syria, Palestine and Mesopotamia with both monks and nuns living isolated, in prayer and poverty. Saint idolization also developed at that time, with pilgrimages to saint- and martyr-tombs, dispersed all around the Middle East. 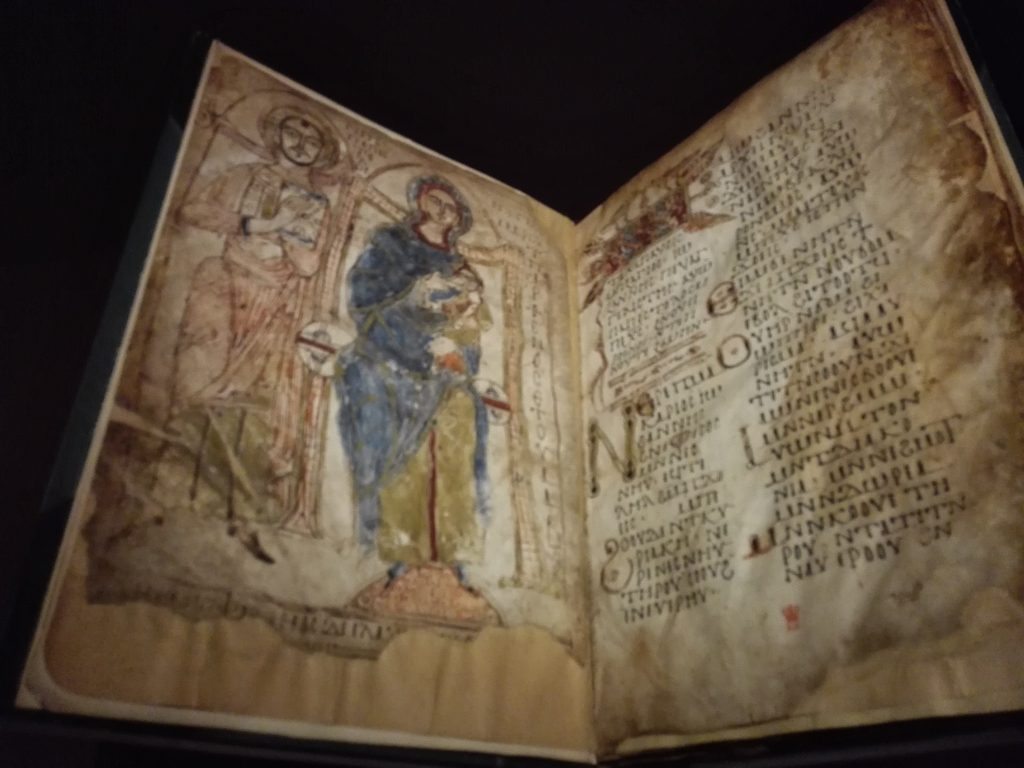 The oriental churches after islamisation:

The Prophet Mohammed’s followers began the Muslim conquests from Arabia. Damascus was conquered in 646, Jerusalem in 638, Alexandria and Mosul in 641. The Christian and Jewish majority – dhimmis – were allowed to continue to practice their religion if they paid a tax but the discrimination against non-Muslims, their traditions and customs, such as their language, was common practice. Hence the Arabic language gained momentum.

Christians however continued to live side by side amongst Muslims, some periods in history being calmer and more tolerant than others, depending on the region’s Caliph. Conversions to Islam increased along with the social and economical oppressions after the 13th century A.D. Until then Christian artworks had flourished among the Oriental congregations. Frescoes, icons, painted manuscripts, silver- and glass objects, depictions of Christ, Mother Mary and different Saints are exhibited in well decorated rooms at IMA. It’s interesting to view the differing styles from Byzantium to Egypt.

The Crusaders, who were active between 1095 and 1291, led to an increasingly tense atmosphere for the Oriental Christians but they also brought along a Western art form that eventually mixed with the Oriental one, creating unique art works. These influences swayed both the East and the West. It wasn’t until 1535, that a peace treaty was signed between the Ottoman Empire and François I (which extraordinary manuscript is shown). Thereafter, commerce and exchanges between the West and the East increased.

Along with the fall of the Ottoman Empire, WWI and the creation of the different Arab nations, the Middle Eastern Christian’s situation worsened. That period’s worst massacre was probably the one the Young Turks inflicted on Orthodox Armenians, in 1915.

In modern times, after some years of relatively calm, the Christians are once more suffering in the Middle East because of both the upswing of the Muslim Brotherhood and the fanatic Islamists. Christians have had to flee their homeland. South of Stockholm, in Södertälje, among others, now houses a large group of Syrian Orthodox. The Mediterranean Museum in Stockholm, has exhibited some of their belongings to show their desolation. IMA also gives homage to these uprooted groups with photographs, manuscripts and objects.

To conclude, I want to add that the excellent guide, who took us around, reminded us, that despite wars and persecutions, there are still more Christian believers in the Middle East than in Europe! This magnificent presentation, takes the visitor through a more than two thousand year old history- and art-trip back to our origins. So don’t miss that journey!