That’s the title of Khadija el-Salami’s Yemeni film. The movie was shown in Paris this winter and got a prize at the Malmö Arabic film festival. I met her in Paris, which has become her home since she left Yemen a number of years ago, saw her film and interviewed her. 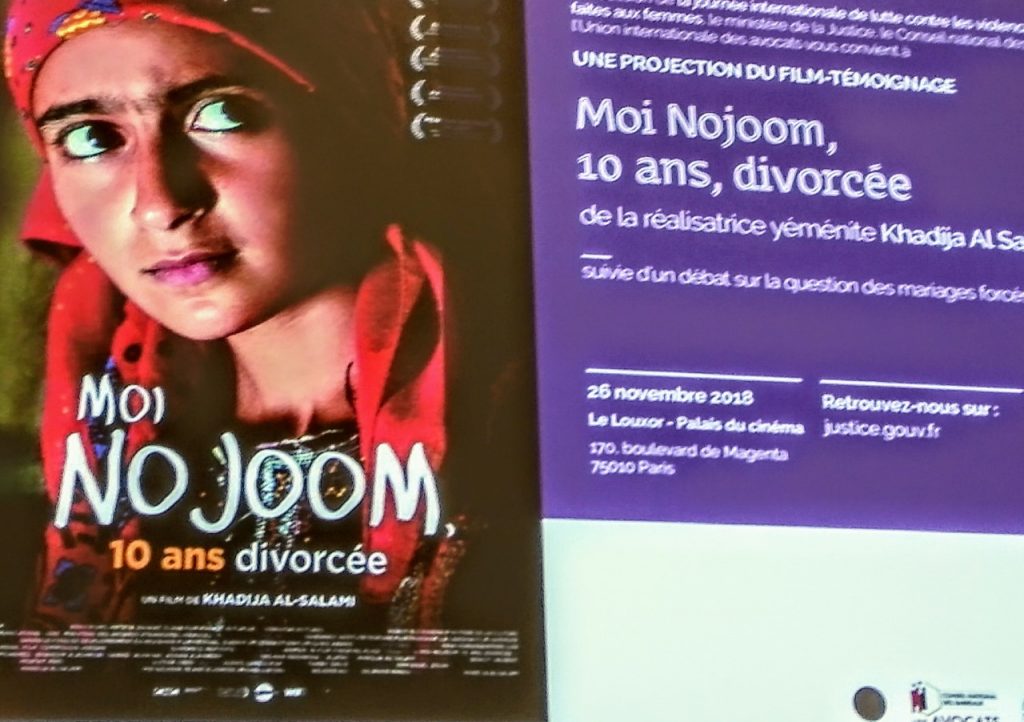 Why did you choose this subject for your first feature film?

It is closest to my heart. I was myself married off to an older man at the age of eleven. However, I’ve done several documentaries about Yemen before this one.

Is it still common with child marriages in Yemen?

Yes unfortunately, at least in the countryside where I come from. It’s linked to ancient traditions and honour codes. My mother was also married off when she was only eight years old. She thought it normal that girls should suffer…

How did you manage to escape your husband?

I was so desperate after he raped me, that I hit my head against the wall and just wanted to die. He took me back to my parents to get them to force me to stop my revolt and accept my ordeal. However my mother took pity on me and helped me get a divorce. Afterwards we were both shamed and excluded from our family, so we had to work to earn our living. It was tough times.

Despite that, you apparently managed to get out of your dire situation. How did you do that?

I was a good student and got a scholarship to study in the USA after graduating school at 16. There I studied film and communication. Eventually I got a job at the Yemenite Embassy in Paris and have stayed here since then.

Do you often travel back to Yemen?

Yes, several times per year until the start of the war. Now it’s more difficult with Saudi Arabia daily bombing the country.

What about Nojoom, that’s partly a biography from what I gather, did you do the shooting in Yemen?

To answer your first question: the story mirrors my own experience but it’s also a problem concerning millions of girls worldwide. I strive to reach a maximum of people in an effort to try to eventually end child marriages. And yes, I did shoot in Yemen, which was a nightmare!

I only used amateurs and never told them what the whole story was about, as it’s a sensitive field, but directed them from scene to scene. It was especially difficult to get permission to shoot the sequences in the courtroom. I found out that the judge himself had married a 13-year-old girl! So I just told him that I was going to film a divorce without specifying…

After the movie got a prize in Dubai, was it shown in Yemen as well?

No, there aren’t any cinemas there and it got censured and stopped from being shown on national television, so I decided to tour Sanaa’s main public squares with a large white sheet and showed it myself like that. Afterward the screening many girls came to see me, telling me about their ordeals. I tried to encourage as many as possible to refuse such marriages.

You have done many documentaries about the subject as well and you have also started the NGO Albaradoni. Can you tell me a bit about it?

Education is essential to change people’s worldview and I’m especially interested in helping girls get educated. That’s why I started this organization. However with the war raging, we have to help all children, so now we concentrate on putting up a temporary school with a teacher for both girls and boys in one of the main refugee camps.

Has the war contributed to worsen the situation for girls?

Definitely. Saudi Arabia isn’t only destroying people’s lives and our entire cultural heritage, but it’s also hindering women’s development. During the Arab Spring in 2011, we had hoped for a better future and several Yemeni women struggled for gender equality and to stop child marriages. The war has stopped that. It’s terrible!

The subject touches me so deeply that it serves as fuel and it has become my life’s purpose to strive to end this ancient tradition in my home country and everywhere if possible.

According to UNICEF, one girl out of seven is married off before the age of 15 and one of three before the age of 18 in Yemen. Khadija has indeed lots of work still to do… In general the Muslim reformists work uphill to try to change these out-dated customs. The Prophet himself married eleven women, among which the six-year old Aïsha and consummated the marriage three years later. Khadija hopes that the West will help stop the war as well as child marriages, even if she of course understands that it will take time.

Sweden has one of the strictest rules against child marriages (forbidden under age 18) and recently the law was further enhanced: no child marriage shall be accepted as of 1 January 2019, including those done abroad. Hopefully, other countries will follow suit.